The Raiders have certainly made a lot of moves in free agency, which made this pick quite easy. They traded for Matt Schaub (which eliminates their immediate need at QB), whilst losing out on Rodger Saffold and letting Jared Veldheer walk to the Cardinals means that they are obviously looking for a new franchise left tackle. The Raiders offensive line is a mess, but they have plans to start 2013 2nd round pick Menelik Watson at right tackle and move newly acquired OL Austin Howard inside to guard. 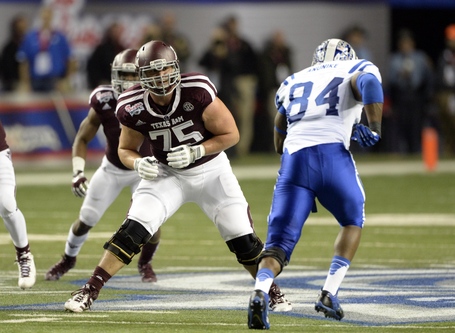 Many people believed that had Jake Matthews entered the 2013 draft, he had enough potential to be selected ahead of #1 and #2 overall picks Eric Fisher and (fellow Aggie) Luke Joeckel. He also is part of the Matthews bloodline, being the son of Hall of Fame guard Bruce Matthews and cousin of Packers linebacker Clay Matthews. After a year of starting at LT and protecting high-profile QB Johnny Manziel, Matthews has cemented his position as probably the best LT prospect to come out since Joe Thomas.

While not as athletic as Joeckel or Fisher, what Matthews lacks in athleticism, he makes up for with pure footwork and technique. He is also clearly the more powerful run blocker, and has manhandled everyone that lines up across from him. Matthews should be able to both protect Matt Schaub and drive Maurice Jones-Drew and Darren McFadden in the running game. He will be a future Pro Bowler for years to come.