Remember that time when a blocked field goal somehow turned into a fresh set of downs for Green Bay? Yeah... good times. BTSC reader NoVaBurgher has the pick for the Packers in our community mock draft.

Like a few others here who have posted these mock picks, I too have a confession to make: I was not born wrapped in a Terrible Towel. When I was a youngster, there was another team that I cheered for -- the Green Bay Packers. How could this be? I had never set foot in the state of Wisconsin, had no relatives there, had no earthly connection to the team other than the fact that I really liked cheese, so I cheered for them. Like most of us, we do some dumb stuff when we're kids, and I am no exception. My indoctrination into full-fledged Steeler fandom came in '98 during Steelers training camp (I repost my Latrobe story every year at the start of training camp, so you'll have to just sit through it....again). After Super Bowl XLV, of course, any notion of cheering for the Pack came crashing down. And while I no longer really care for them anymore, you always remember your first...

Nostalgia over, let's get down to business.

If Clinton-Dix is still on the board, you better believe they'll be loading that pick into a cannon and firing it at Goodell as soon as they can.-NoVaBurgher

The Packers are run similarly to the Steelers, so figuring out how their team operated was a pleasant surprise. They rarely make a splash in free agency, but if they do, they do it big - Charles Woodson, Reggie White in the past, and this season they managed to get Julius Peppers on a 3-year deal to pair with Clay Matthews for what could be a very formidable pass rush. However, it's not all sunshine and roses, they still have several holes to fill (giggity). One of them being who will put his hand in the dirt in front of Clay Mathews or Peppers. While I could see a guy like Ra'Shede Hageman fitting in nicely, their biggest need is at safety, as their 24th ranked pass defense definitely could use a boost. Packer safeties last year combined for a whopping ZERO interceptions, which hadn't happened in Green Bay since the '50s. If Clinton-Dix is still on the board, you better believe they'll be loading that pick into a cannon and firing it at Goodell as soon as they can. But with him and Pryor both off the board in this scenario, I don't see Ted Thompson as the type of person to reach on a player just to fill a team need.

Another big time need for them is at TE and somewhat so at WR. If Eric Ebron is still available, remember the draft-pick-cannon I mentioned. However, since taking over in 2005, Thompson has never drafted a TE or WR in the 1st round (he's had great success in finding guys like Jordy Nelson, Greg Jennings, Jermichael Finley, etc. later on), and with no "can't miss" skill prospects still available, I can't see him taking one here. No matter HOW much I'd like to send my boy Brandin Cooks to them, and even though they've lost Greg Jennings and James Jones in the last two offseasons, they still have a solid receiving corps led by Nelson and Randall Cobb. Staying with the offense, the Pack also lost their starting center Evan Dietrich-Smith, but there aren't really any 1st round centers this year, so it won't be an offensive lineman. So after telling you fine folks who I think they WON'T draft, I'll go ahead and tell you who I think they WILL draft: 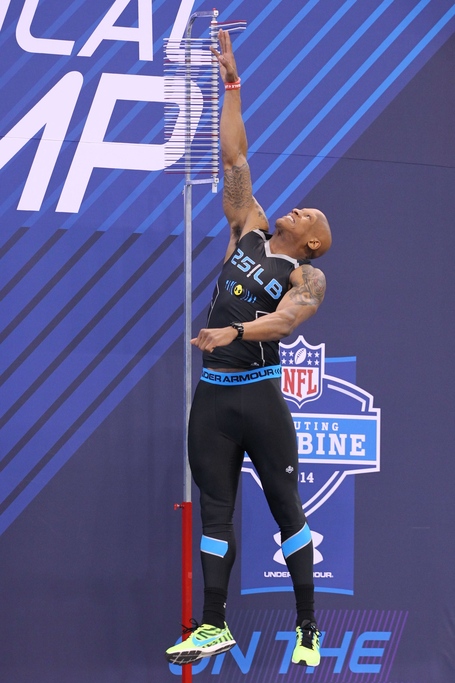 Shazier has been around football his whole life and is the son of a football coach - and those are the kinds of guys you just want on your team.-NoVaBurgher

A guy who has been rocketing up draft boards recently with an insane Pro Day workout, he fits the bill for a Ted Thompson selection. Shazier represents a position of need, has an insane amount of athleticism and seems to have a nose for the ball, not unlike his future counterpart AJ Hawk who is coming off a record-setting season (and who also hails from the same alma mater). Workout numbers aside, Shazier has been around football his whole life and is the son of a football coach - and those are the kinds of guys you just want on your team.

Still not convinced? Well let's look at the numbers: Shazier put up some crazy production at Ohio State (315 tackles, over 200 of them solo over his career), and while he may be best suited for a 4-3 weakside linebacker, he has the smarts, the athleticism, and the frame to handle sliding in right next to Hawk in Dom Capers' 3-4. If Shazier hadn't been projected as low as a 3rd round pick before the combine, we'd be talking about him going in the top-15. Make no mistake, this is a great value pick.

The biggest need for the Packers is at safety and if Clinton-Dix is there, he'll be making the trip up to the Frozen Tundra. However, in the NFL draft, you don't draft strictly for need - you make your picks based off of where need meets BPA. After sifting through the available players, I found that line most closely ran through Shazier or Hageman. Reason I went with Shazier is I believe ILB to be a more pressing need for them than D-Line after they re-signed BJ Raji, and I also like Shazier as a prospect just a tad better than Hageman.