A snapshot from the aftermath of one of the most pivotal draft picks in NFL history.

Share All sharing options for: Art Rooney gives his ok on Steelers selection of Terry Bradshaw in 1970 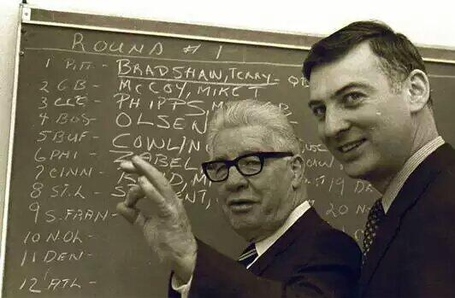 There's something so humbling and awesome about looking at historical pictures about the sports we follow. Art Rooney gives the "ok" sign after the Steelers' chalkboard running tally of the 1970s draft is probably the equivalent of a canned "Grip-n-Grin" photo between the Commissioner and the first pick in the 2014 NFL Draft.

Except this one has one of the most pivotal choices in the history of the NFL, made by one of the founding fathers of the NFL and the start of the game's best dynasty.

It would get better and perhaps there are photos we'll find and run of those moments (the 1974 draft in particular), but for the time being, we can be content looking at the humbleness of how one of the world's largest economic powers had begun to grow - through chalkboards and quarterbacks, from deadweight franchises to ones of historical dominance.

I think most Steelers fans and Mel Kiper would have given this pick an A-rating.