Our community mock draft rolls onward, with BTSC reader c63tho representing those hooligans from across the state.

Ah, the Eagles (aka not-the-dream-team). The "other" Pennsylvania NFL team. They had a pretty good year, all things considered. They hired the most hyped coach in 2013 - Chip Kelly - and a "fire" was lit in Philadelphia. Visions of flawless execution, monstrous stamina, "scientific trends applied daily"... and all we got was more of the same football that we've always seen - speedy receivers, good offensive line, porous defense, and running LeSean McCoy into the ground. We didn't see teams gasping for breath as the Eagles turned on the afterburners. That said, give the man some credit: he got more out of Nick Foles than Andy Reid ever could, and they won the NFC East. How can the Eagles continue to improve?

Here's a PFF graphic describing the Eagles starting lineup for 2014-15 based on who was under contract. Annotations are mine, showing the latest in offseason moves. 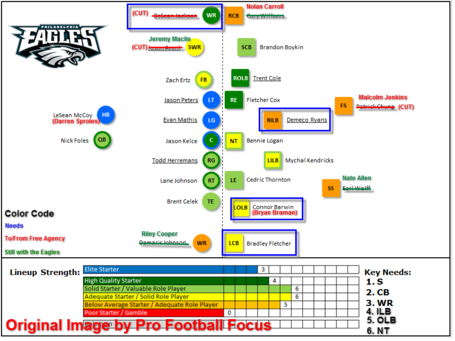 (Ed. note - If the image seems a little fuzzy for some reason and you're having trouble reading it, clicking on it will pull up a full size version that's much clearer.)

What do we learn by studying the starting lineup?

I'm mad jealous of that offensive line, and that's all I'm going to say about it. LeSean McCoy was 2014's leading rusher, and will be supplemented by Bryce Brown and trade addition Darren Sproles. Out wide, Jeremy Maclin and Riley Cooper were re-signed, while malcontent DeSean Jackson was released. No replacement has surfaced for DeSean yet, and it looks like a position that will be addressed in the draft. Fortunately for Philadelphia, Foles has improved and is showing promise again, so they can scratch a starting quarterback off the wishlist (and thank their lucky stars because this year's crop of quarterbacks sucks big-time). In summary, wide receiver is the only need on offense.

While they had a top-10 rushing defense, the Eagles gave up the most passing yards in the NFL.-c63tho

Despite all the offensive promise, defense was another story. While they had a top-10 rushing defense, the Eagles gave up the most passing yards in the NFL. This directly points to massive problems in the back end (notice all the orange in the starting lineup chart?), which they've tried to address with several signings: Nate Allen, Malcolm Jenkins, and Nolan Carroll. None of these guys are spectacular, but they've just paid good money for these additions and will want to see them play. At cornerback, Bradley Fletcher is just a guy - they could use an upgrade there. Demeco Ryans is regressing at one of the ILB spots, while an improvement over the pedestrian Connor Barwin at OLB is also welcome.

Kyle Fuller - a well-rounded cornerback in a deep draft. Not the most athletic, but is intelligent and aggressive in coverage.

Bradley Roby - a great athlete at cornerback, but his knocks are from consistency and technique issues.

A mess of wide receivers - Odell Beckham Jr., Brandin Cooks, Marqise Lee, and Kelvin Benjamin, in some order. Beckham has the best hands, Cooks is the fast combine wunderkind, Lee is well rounded but inconsistent, and Benjamin is the biggest. Not a lot separates them.

No real pass-rushing or inside linebacker options here, although Anthony Barr or C.J. Mosley would be snapped up pretty quickly. 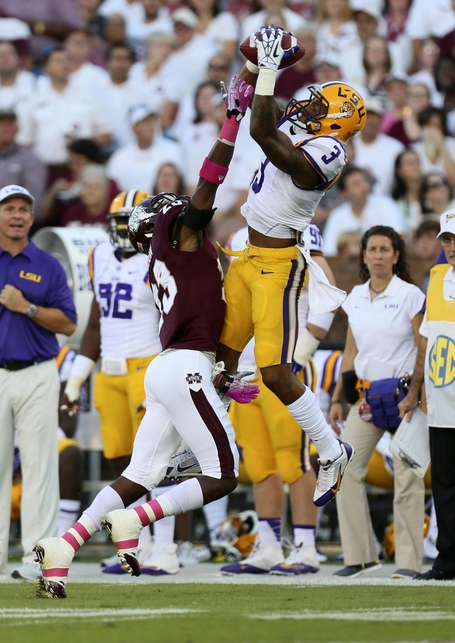 In this case, I think it comes down to whether you think a receiver, a corner, or a safety would make the most impact on the team. A corner would help bolster the secondary, but I'm not high as high on either Fuller or Roby (or Verrett) and I don't see them being much of an improvement over Bradley Fletcher, who I see as a decent CB2.

In the end the biggest impact is found at receiver, where Maclin is injury-prone, Cooper is a complementary receiver, and DeSean Jackson's void will be felt strongly. Beckham runs great routes over the middle and down the sidelines, plays bigger and tougher than Cooks, is more consistent than Lee, and has the best hands in the entire draft class. I think he compares really favorably to our own Antonio Brown.