All Ryan Succop had to do was kick a 41-yard field goal to beat the Chargers, eliminate them from the playoff picture, and allow the Steelers to squeak into the postseason. But Succop missed, and a few botched calls later, the Chargers won. BTSC reader WelcomeToReality has the pick for the Chiefs in our community mock draft.

The Chiefs were last year's surprise team, going from 2-14 and a total disaster, to an 11-5 season with a miraculous mustache in between. Now, it is on Andy Reid to follow up his success with a strong draft class to bolster a team that utilized its strengths (Jamaal Charles, stout defense, not so tough schedule) to hide its weaknesses (See: Smith, Alex - game manager extraordinaire. Who is their No. 2 receiver? THEIR KICKER SUCKS). As the season went on though, the team's weaknesses got exposed. Beyond Charles, the offense sputtered badly and the defense got shredded towards the end of the season, including a disappointing exit in their one and only playoff game against the Indianapolis Colts - where they coughed up a 28-point second half lead and somehow lost in regulation.

The question is what to take? They need help along the O-line, and while they will slide last year's No. 1 pick, Eric Fisher, over to LT for the departed Branden Albert, they will need to put Donald Stephenson as their RT and determine who their RG is going to be. I doubt they will take a guard in the 1st round unless they believe someone like Zack Martin could provide a more drastic upgrade than talented players at other spots of need (LIKE KICKER). Also, a problem for the Chiefs is that they no longer have their 2nd round pick (part of the Alex Smith trade), so it's highly doubtful they could still land a top guard prospect if they passed on the position here.

The need to pair another safety with Pro-Bowler Eric Berry reads a lot like the situation at guard. With no clear-cut 1st round safety talent left at this point, it would be very hard to justify picking up someone like Jimmie Ward. Especially when there is the one thing that Andy Reid cherishes more than anything else in this draft, and it still has a lot of options to pick from....

I kid....Mostly, his name is Succop. I mean, any guy that has "Suc" in his name can't be great, right? How could they not understand this?

Good ol' walrustache (have you seen that thing?!) needs playmakers at the skill positions on the offensive side of the ball to make his West-Coast style offense run effectively, especially since former Steelers wideout Emmanuel Sanders spurned him to sign with the Broncos, and DeSean Jackson opted not to reunite with his old ball coach. The free agent options to pair with Dwayne Bowe have seemingly run out, and I doubt anyone views A.J. Jenkins or Donnie Avery as long term answers at No. 2 to help open up the passing game for Smith and Bowe. So with that being said... 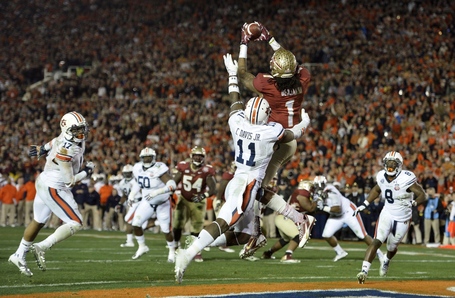 It comes down to Brandin Cooks or Kelvin Benjamin. While Cooks has pure speed, Benjamin is a total freak of a WR - at 6'5 he is the size of a TE and is easily taller than most DBs with few exceptions, creating a matchup nightmare.

Benjamin is slightly raw, but that is a scary proposition to think that he could get even better, especially with an offensive-minded head coach. If this draft happened, I'm pretty sure Reid would lose his mind with excitement, he may even go so far as to trim that thing on his face. Reid is also used to working with players (particularly wide receivers...) with work ethic or attitude problems, so I don't think that will be an issue here even if all the reports surfacing about Benjamin are true. Honestly, the Chiefs couldn't ask for a much better player at the 23rd pick, except a kicker of course. I hear that Chris Boswell kid is a real game changer.

Final note: Big thanks to the guys over at Arrowhead Pride for being helpful and informative!