Somehow the Cincinnati Bengals were the only AFC North team to make the playoffs last season. But true to Bengals form, they crashed out in the opening round yet again. BTSC contributor SteelSpike has their pick in our community mock.

The Bengals don't have very many needs on offense, which means this pick will most likely be defense.

However, this is Mike Brown we're talking about here. The guy who, when he picks, makes even Bengals fans say "What?". There's a hilarious video on YouTube of a Bengals fan when he sees they passed on David DeCastro to get Kevin Zeitler. He loses his mind in typical state of Ohio fan style.

Anyway, since I'm not Mike Brown and I'm still in full control of my faculties (debatable), I will be making a pick on the defensive side of the ball.

[On the Bengals' defense] there's two or three really good players, but the other 8 or 9 are just not very good.-SteelSpike

The Bengals defense is in terrible disarray. There's two or three really good players, but the other 8 or 9 are just not very good. Since the Bengals have historically (and are sure to continue) with a Zone 4-3 defense, I looked first at upgrading their pass rush since they had a fairly pedestrian 43 sacks in 2013. Unfortunately for me, there isn't good value here with all the best edge rushers off the board. Moving on.

I then wanted to get them a weak side OLB (pass defense). Shazier would have been perfect... but no value left. Moving on.

Next was the ultimate in pass defense: corner back. The Bengals secondary is, for lack of a better word, ancient (outside of Dre Kirkpatrick, who has shown to be a typical Mike Brown pick). So, this is the department I shall focus on. But with the two big boys gone (Gilbert and Dennard) who to grab?

I was told by the Bengals fan I was working with for info on his team that - in no uncertain terms - I would be murdered if I selected Bradley Roby for them. As funny as it would be to have Bengals fans over here screaming at me, I'm going to do exactly what I did a couple years ago when I was the Bengals GM for the Mocking The Draft, um, community mock draft -- in which I got them A.J. Green and Andy Dalton in the exact same rounds they were actually selected.

On to the pick. 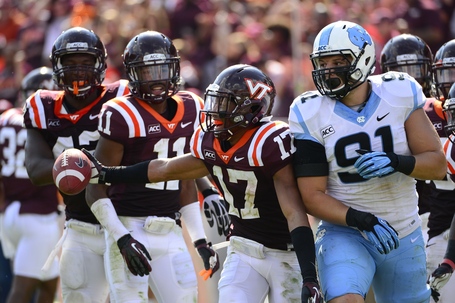 With all the old guys in their secondary, a youthful infusion is essential for the Bengals to, ya know, have some postseason success.

Fuller excels in zone coverage, which is something the only young corner on their roster right now struggles with. Since the Bengals are sure to continue with the 4-3 zone (as previously mentioned), Fuller makes for a perfect addition to the best football team in Ohio.