San Diego was the last AFC team to squeak into the playoffs (at the Steelers' expense), but at least we got to see them become the latest team to keep the Bengals winless in the postseason since 1991. BTSC reader L-Ray has the pick.

As a long-time Steelers supporter going back to their heydays in the late 70's, I've engaged in only minimal support for other organizations over the years. Dan Marino was the biggest exception, but the San Diego Chargers have always been at the periphery of my interest. My father was a big football fan, and family legend has it that he named me after Lance Alworth - one of the great Chargers and receivers of all time - so maybe it's fitting that I am picking for the San Diego. Plus, I love the city, the climate, and the abundance of fresh and tasty IPA's that dominate the local beer culture. Great place, but now to the matter at hand.

Not unlike the Steelers, the Chargers have needs at CB, WR, NT, pass-rushing OLB/DE, and OL-L-Ray

Not unlike the Steelers, the Chargers have needs at cornerback, wide-receiver, nose tackle, pass-rushing linebacker/defensive end, and offensive line - and equally similarly they need to upgrade these positions more so through the draft than through free agency due to salary cap pressures. They also have a quarterback who has come to that point in his career where the window of opportunity for winning is shrinking. Last year's draft was a bountiful harvest, with D.J. Fluker and Keenan Allen providing immediate returns.

Based on their needs and the available talent this year, I tossed around the idea of adding cornerbacks Jason Verrett or Bradley Roby to their defense. Both would fit into John Pagano's heavy zone-scheme defense (especially Verrett), however there is good depth in this draft at cornerback so I see them picking up a corner in round two. I also flirted with the idea of adding a wide-receiver like Marquis Lee to add to the offensive firepower around Phillip Rivers, but again, a deep receiver draft beckons picks in latter rounds. 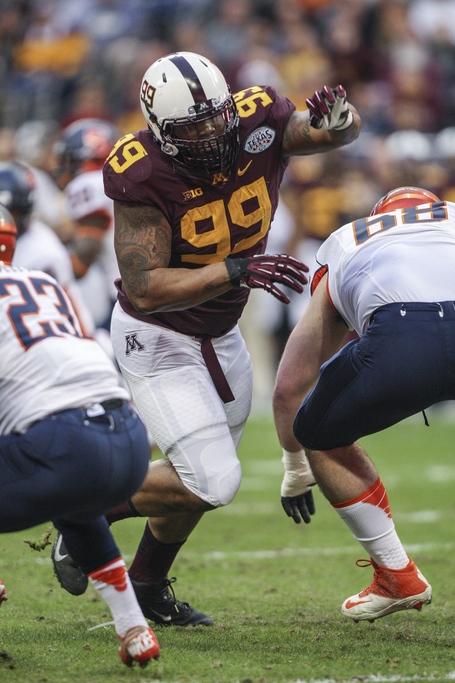 The Chargers are weak up the middle after losing Cam Thomas (BabyZilla!) to the Steelers, so they are forced to go with some combination of Sean Lissemore and Kwame Geathers. As a 3-4 defense, they are not creating any disruption at the point of attack, and other teams have had good success pounding them inside. I know I will take a lot of flak for passing on more obvious options like Louis Nix III and Timmy Jernigan, but hear me out (and then feel free to hurl your opinions).

I think [Hageman] has more upside than Louis Nix-L-Ray

Hageman is a beast of a man at 6'6'', 310, with a rare combination of long arms, power and speed. By no means a traditional zero-gap nose tackle, he can prove to be versatile by lining up in multiple gap formations. I think he has more upside than Louis Nix, and he will not only push the pocket and provide pressure in the backfield, but he can also get after the quarterback. Getting pressure up the middle would be a valuable commodity in a division of pocket passing, slower quarterbacks like Peyton Manning, Matt Schaub, and to a lesser degree, Alex Smith. Hageman also has a good pedigree at batting down passes, not unlike J.J. Watt, which would make him even more of a disruptive force in the middle.

It's all about being strong and creating havoc, and I see this as a role Hageman will embrace and be willing and able to prove his mettle. He also seems like a good character person, which new GM Tom Telesco covets. I think the biggest weakness would be how Hageman performs against the run, but I think this can be coached up, and if he can prove to be a disruptive force, the middle linebackers will have more space to get at the running backs coming through the inside lanes.

I don't think Hageman is a reach at No. 25, and given that this draft can fill other Charger needs in later rounds, I would rather get a key member of the front seven earlier than later. The drop-off is usually greater in later rounds for positions in the trenches. I like Hageman more than the competition here, solely for versatility and bringing other valuable traits to the position. He's a brute, and I see him fitting in nicely with the Chargers defense.