2014 NFL Mock Draft: Cleveland Browns Select (with their second pick, via the Colts)...

We're entering the final stretch of our 2014 community mock draft, and here we have BTSC reader AMKrup representing the Browns for the pick they got from Indianapolis in the Trent Richardson trade. And yes - this pick is delivering on the illustrious history of Browns picks in our community mock drafts.

Share All sharing options for: 2014 NFL Mock Draft: Cleveland Browns Select (with their second pick, via the Colts)...

With the 26th overall pick, the Cleveland Browns select...

From the University of Medieval France, Michel Trebuchet, kicker.

I caught up with the top brass in the organization, as he was leaving a federally subpoenaed deposition.

He went on to explain that the trebuchet would fill both strategic and symbolic needs within the organization. Unable to select a top passer with the 4th overall selection in this year's (community mock) draft, the Browns have made the strategic decision to simply kick a field goal as soon as they get on the field. This marks the first time since 2000 that a kicker was taken in the 1st round, when Al Davis took Sebastian Janikowski 17th overall.

"That man was a drafting genius."

Originally, I was told, the plan was to load the counterweight of the device with Cleveland's four Ed Thorp Memorial Trophies (also of the medieval era) and 1,500 discarded LeBron James jerseys - the weight of which (276 pounds) would be enough to propel an NFL football a distance of 92 yards through the air. However, there was a problem.

"Someone at Flying J stole the trophies. It wasn't me. It definitely wasn't me, I swear."

Unfortunately, all remaining LeBron James jerseys in the city had been burned, so they were at a loss - until Jadeveon Clowney fell to their 4th overall pick. Weighing in at 265 pounds, the Browns plan to use Jadeveon as a defensive end on defense, and as a crucial component of the field goal kicking apparatus on every first down this seasons - making him the most unique two-way player in the history of the game. This will also pay huge dividends when it comes to placing a franchise tag on the K/DE, as they plan on designating him primarily as a kicker.

"I'm under federal investigation for fraud. What did you expect?"

While parting ways, I asked Mr. Haslam if he had any plans to draft a center in the first round had they been unable to re-sign Alex Mack.

"Who do I look like, Jerry Jones? I mean, aside from being an eccentric billionaire with white hair who owns an NFL franchise? At any rate, no, we'd go with a more reasonable selection that that, such as our recent picks of a sno-kone and washing machine."

The trebuchet will wear #4, in honor of fellow kicker Phil Dawson - the greatest Cleveland Browns player of the modern era. 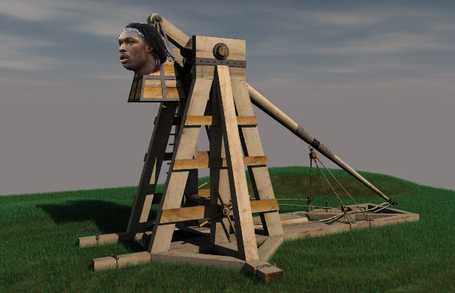 When it came down to the actual pick, I went to THE authority on the Cleveland Browns - my friend Scott from work who happens to be from Cleveland. Unlike the farcical Jimmy Haslam quotes above, these are real.

AMKrup: What do you think of Jadeveon Clowney going to the Browns with the 4th overall pick?

Scott from work: I do not want Jadeveon Clowney on the Cleveland Browns. He doesn't have the motor and intensity that the Browns need. He takes plays off, especially if they run the ball away from him. I need a player who is going to bring it every play. The Browns need heart as much as they need talent.

AMKrup: What do you consider the Browns' biggest need in the draft?

Scott from work: Their biggest draft need is offensive line. Joe Thomas is not getting any younger. He is past his prime and getting by on past success. We were in trouble of losing Alex Mack this offseason. Our guard play is some of the worst in the league. We have an up-and-coming lineman in Mitchell Schwartz. If we can draft some guards and tackles we will be in good shape. It all starts with the line. Where the line goes, so goes the offense. Ben Tate can be a 2k yard rusher behind a stellar line.

AMKrup: If you could have any player in the draft, who would it be?

Scott from work: Going along with my prior answer, I would love to use my 2 first round picks on offensive linemen. Greg Robinson out of Auburn or Jake Matthews out of Texas A&M would have been my pick at 4.

AMKrup: Give me your best prediction of what the 2014 season has in store for Cleveland.

Scott from work: I would be happy with 6-10 to 8-8. It will show a lot of improvement. I would not be surprised if they made a huge run in the playoffs. I am very optimistic about this team. With the weapons they have brought in and a deep draft with a lot of picks, we can be witnessing something special on the shore of Lake Erie.

AMKrup: Who do you hate more, Art Modell or LeBron James?

Scott from work: Art Modell. Google the horrible thing he did to the city of Cleveland. We offered him to join in on the sports complex in southern downtown (still downtown), but he did not want it. He would have had his own stadium. He would have been loved by the city, but like the crook he is, he stole the team away from the diehard fans. I will hate A. Modell until the end of time. Bron will be back. He still has a house right outside Cleveland. Still spends time in the city. He still does charity events in Cleveland. This summer he will opt out of his deal and come back to the city that truly loves him. We will win a championship for the city of Cleveland before his time is up in the NBA.

Their best offensive weapon is Josh Gordon, and Ben Tate isn't running for 2,000 yards even behind five armored personnel carriers.-AMKrup

So, ladies and gentlemen, there we have it. Scott from work has spoken, but I'm about to completely ignore him because I don't agree with that strategy whatsoever. However, I am referring him to counseling for his battered wife syndrome regarding LeBron.

Their best offensive weapon is Josh Gordon, and Ben Tate isn't running for 2,000 yards even behind five armored personnel carriers.

I'm not a Hoyer guy. 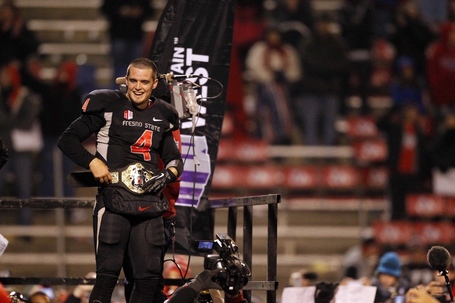