The Saints colors are listed as black and "old gold", whatever that is. When someone mentions "the black and gold" though, we all know they can only be referring to a certain franchise with six rings. BTSC reader Ike Evans has the pick here for New Orleans.

Positives: "Rare height for the position. ... Aggressive at the line of scrimmage. ... At his best in press coverage where he can get his long arms on the receiver and disrupt the timing of the passing game. ... Good foot quickness to turn and run with the receiver. ... Plants, drives and closes quickly. ... Gets his hands on lot of passes. ... Has the experience and intelligence to operate well in zone coverage. ... Enjoyed a solid week of practice at the Senior Bowl..."

Negatives: "Questionable deep speed. ... Lacks the soft hands for the interception. ... Misjudges passes and allows too many to get into his chest. ... Generally a reliable open-field tackler, but likes to duck his head and swipe, leading to some missed tackles. ... Can get a bit grabby downfield, which will lead to pass interference calls at the next level. ... Willing in run support, but was protected by a physical and experienced front seven, and prefers to stand around the pile, rather than throw his body into it..."

It broke my heart the day Keenan Lewis signed with the New Orleans Saints. If you haven't guessed by now the scouting report above belongs to him, back when he was coming out of Oregon State. He sounds like a major gamble, doesn't he? Definitely not a slam dunk because some of those negatives were ALARMING, but we worked with him (yes, I'm from Pittsburgh I said WE, lol). We coached him up. We waited for two years for him to learn our scheme and get over injuries. We watched him quietly work his tail off, season after season, while that "bust" label was being held over his head. Then finally in that fourth year of burning iron, molding it, removing its impurities out comes a shiny new shutdown corner smoking out of the furnace made of pure steel. All that work we put into that kid, for naught.

Well...maybe in a sad way it wasn't a complete waste. If you haven't heard Keenan Lewis was a MONSTER this year for New Orleans which gives me a strange sense of pride and horror at the same time. Horrified because as Steelers fans we look at our roster without a sure-fire shutdown corner, and many believe we will have to take two CBs in this draft. We have a major hole that I wish Keenan Lewis could fill. We have many holes to fill for that matter... unlike the New Orleans Saints.

The Saints really don't have ANY immediate needs. They have a few question marks, but not necessarily dire needs. -Ike Evans

Its really amazing when you start to analyze this roster. The Saints really don't have ANY immediate needs. They have a few question marks, but not necessarily dire needs. Probably their three biggest positions of need are center (after losing Brian de la Puenta), inside linebacker (they have guys that can play, but I think they can upgrade from David Hawthorne and Curtis Lofton in this draft), and another corner. The Saints can get a center and a ILB later in this draft, but that still leaves the question of what to do with the first pick?

Their biggest need going into free agency was addressed with arguably the best safety in the league - Jairus Byrd. Adding him with Kenny Vaccaro, and the aforementioned Keenan Lewis, will form one of the most lethal defensive backfields in the NFL. Except... they don't really have another corner. There are some young guys they like (think Curtis Brown types from two years ago), but nothing worth passing up on a quality pick for in the 1st round. The problem with this mock though... KYLE FULLER IS ALREADY GONE.

Talk about a perfect fit - Kyle Fuller may be the best man-to-man cover corner in this draft. He's big at 6 feet, athletic, and physical. An ideal fit for Rob Ryan's version of the 3-4 defense, which is more like his twin brother's scheme because the CBs mostly run press-man instead off-zone coverage like our Dick LeBeau-led pride and joy (BTW - contrary to popular belief, Kyle Fuller is NOT that good in zone coverage).

With Fuller gone, I just can't see the Saints going corner in the 1st round.-Ike Evans

With Fuller gone, I just can't see the Saints going corner in the 1st round. Rob Ryan does have one thing in common scheme-wise with LeBeau -- they both like big corners, so that rules out Jason Verrett - especially with bigger guys like Stanley Jean-Baptiste, Dontae Johnson, Pierre Desir, Phillip Gaines, and Keith McGill available in the 2nd round or later. I'm also not going to curse New Orleans (see what I did there?) with Bradley Roby, who I just don't think is very good despite the fact he's supposed to be "rising up" draft boards. So, the question still remains what will the saints do with their first pick?

Nooooooowwwww we get into one of the question marks I wrote about earlier. At right outside linebacker you have Parys Haralson starting this year, who did play well. He could definitely be upgraded in the draft this year though with a guy like Dee Ford if he wasn't already gone in this mock (smh, this is like fantasy football), or someone like Demarcus Lawrence or the darkhorse, Kyle Van Noy. HOWEVER, the Saints have Victor Butler coming off an injury this year.

Victor Butler was pretty popular in free agency last year after showing some potential in Dallas (a la Jason Worilds... kinda). After Rob Ryan was fired by the Cowboys and subsequently landed in New Orleans, he whispered in some ears down there and got the kid to join him with the Saints. The question I've been asking myself is whether the Saints want to see what Victor Butler has opposite Junior Gallete this year, or if they'd rather just draft a guy high and groom him. I think they want to see what Butler has, so again we beg the question, what will New Orleans do with the first pick?

Stacked, right? Ridiculously stacked - we're not even going to get into that. Certain pundits have New Orleans taking a tackle in the 1st round, but they LOVE Terron Armstead (who blew up the combine a few years ago) and this is going to be his first year as a full-time starter so no way. Like I said, they need a center and arguably another RB, but both of those can be had later in the draft.

You know what surprised the hell out of me while reading up on this team? Everybody in Louisiana is SCREAMING for another receiver, even the beat writers.-Ike Evans

You know what surprised the hell out of me while reading up on this team? Everybody in Louisiana is SCREAMING for another receiver, even the beat writers. In fact, the Saints top brass has done their diligence with Jarvis Landry and Odell Beckham Jr. (obviously, especially with the proximity), but also have spent extensive time with Brandin Cooks and Marqise Lee. Are you kidding me?!?!?! You have THAT receiver core and you still want another one? A first rounder, too? I keep asking Saints fans, "What you don't like about Nick Toon?" I'll take him - he'd look good in a different shade of black and gold. Really I don't get it, but that's the consensus it seems like.

So, all the long windedness of this article comes down to OLB vs. WR. I think the value is there with receiver in this mock, even though the need isn't there. However, I did start off by saying this team has that luxury because of the lack of glaring, immediate needs to be addressed early.

Sooooo... Marqise Lee or Brandin Cooks? Which would you take? 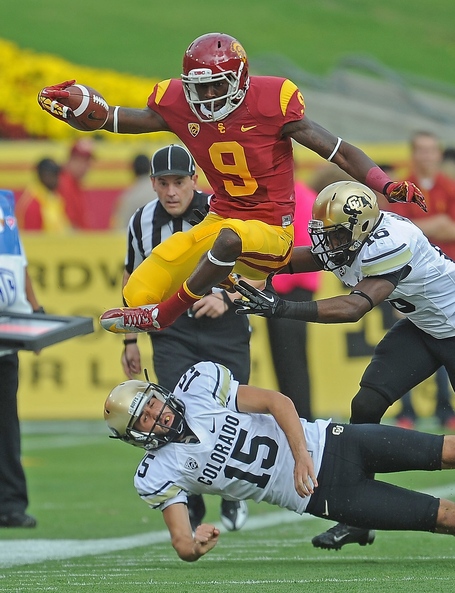 Cooks is probably better based on last year's tape, but put that Marqise Lee tape on from the year before and be amazed. Lee was fighting injuries and bad QBs this past year, and the kid has been fighting his whole life if you know his background. He's very talented and I wouldn't bet against him. An excellent route runner, plays hurt, runs after the catch, and he has experience in the West Coast offense that Sean Payton runs a version of on steroids. Lee does have a high drop rate though, which is scary, but so do guys like Brandon Marshall and Wes Welker. I just have a feeling about the guy, and based on value and situation, he is my pick for the New Orleans Saints.

If you read all of this nonsense - I thank you, and feel free to rip me below. I had so much fun doing this - big shout out to the BTSC gang for letting me.