It would've been great to see Jerricho Cotchery come back to the Steelers, but you have to respect him wanting to be closer to his extended family, in the twilight of his career. BTSC reader asmith87 is here to represent Cotchery's new team in our community mock draft.

The Carolina Panthers are looking to continue to improve upon their 12-4 record, as the reign of Cam Newton seems to be in full effect. Their record has improved every year since his arrival in 2011, and now bolstered by a punishing defense and young nucleus of talent, the Panthers can be the first team in the NFC South to repeat as back-to-back division champs.

This hasn't been the greatest of offseasons for the star QB though: first, surgery on his ankle, then significant losses to his supporting cast - former Pro Bowler Jordan Gross retired in February after an 11-year career, and then Newton lost essentially his entire receiving corps. Perhaps they would rather be playing catch with Nate, the Play 60 kid. Steve Smith will be playing with Joe Flacco now, and he probably couldn't handle Nate's rocket arm anyways. Carolina will have relative unknowns starting at receiver and left tackle - a QB's two best friends - but luckily, Newton still has DeAngelo Williams and Jonathan Stewart to hand off to.

But back to the pick - it ultimately comes down to picking someone to catch balls, or someone to protect the franchise. This draft is deep at receiver and there is a strong chance that the Panthers will double-dip at the position early and late in the draft. The question is, will any of the second-level talent still be available at their pick in the 2nd round? 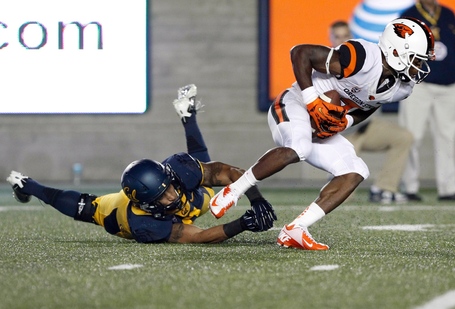 In my opinion, Brandin Cooks is Antonio Smith 2.0. Or is it Steve Brown 2.0? Either way, the resemblance to our own Antonio Brown and former Panther Steve Smith is there. All three are short in stature, but their game and skills are anything but short. Cooks may lack size, but size isn't the only thing that makes a number one receiver. His excellent hands and route-running make him a threat from anywhere on the field, and will be at least a great slot receiver from day one.

Cooks's 4.33 40-speed is going to make Cam Newton's job easy as the defense is going to have to respect that, and open things up for Jerricho Cotchery and Greg Olsen to make their money catching everything underneath. Cooks is going to remind a lot of Panthers fans of Smith in the mid-2000s, and that my friends, is scary.