If there's one good thing that came out of the Patriots' 2013 season, it's that LeGarrette Blount revitalized his career, then brought his talents to Pittsburgh in free agency. In our community mock, our favorite Baltimore import, Mr MaLoR, is here to play Bill Belichick.

Trying to figure out how the New England Patriots like to draft is one of the hardest things to do in this sport, because they are one of the most unorthodox franchises when it comes to the NFL Draft. Whether that be trading away 1st round picks in the future for the chance only to turn those picks into four 2nd round picks or maybe taking a safety in the 2nd round that many had rated as a 5th round prospect, you just never know what New England will do.

What we do know is that head coach Bill Belichick loves two things when choosing players for his football team - smarts and versatility. You can look across their roster, and you see a myriad of players who can do so many different things and often they come from places and spots in the draft unheard of. To this, we must credit their front office.

This year seems a little different, as there is more change going on in New England than people are used to. The star players they have relied upon so much over the last few seasons are not what we are used to. Whether that be Gronk being hurt, Wilfork unhappy, the losses of Talib and Welker to Denver, it is just a different year for New England. With needs at what seems like TE, DE, DT and possibly OG, there is really only one player at this point who would make sense to fit one of those areas... 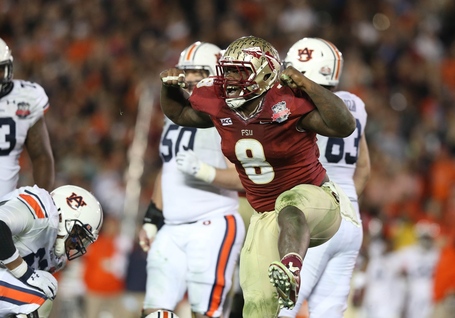 At this point, Jernigan seems like the best player New England could take that would both fill a need and not seem like a reach as, say, taking a TE or lower rated pass rusher here.

What makes Jernigan such a special talent is how far he has come in such little time. Only two years prior, the 6'2" 300 pound DT had made only a handful of career starts. And with the likes of Bjoern Werner, Tank Carradine and other talented defensive players for the Seminoles leaving for the NFL, many were skeptical about how much this young man could handle the role of being a star player for such a talented team.

At the 29th pick, a player of Jernigan's talent should not be available-Mr MaLoR

Well, Jernigan lived up to the billing - becoming one of FSU's most reliable players and wreaking havoc from multiple spots along the D-Line. For a man of his size, he has an incredible first step with an array of upper body moves he can use to take on blockers and get to the QB or RB in a hurry.

New England loves to use a rotation of D-Lineman throughout each game, and Jernigan would fit in nicely with Wilfork, Vellano, Kelly and others. At the 29th pick, a player of Jernigan's talent should not be available, and he could very easily see himself being a top-20 pick come May 8th. Belichick would be ecstatic (for once in his life) to come away with a player like Jernigan this late in the 1st round.