Judging by how close the NFC Championship Game was, and how one-sided the Super Bowl turned out to be, the 49ers probably were the second-best team in the league last year. BTSC reader Collision Course is here to represent him, as our community mock draft nears completion.

Let's get one thing straight right off the bat: the San Francisco 49ers were the second-best team in the NFL last season, behind the Seattle Seahawks. The NFC Championship was the Super Bowl, for all the marbles (unlike when John Madden said it, this WAS Super Bowl 47 1/2).

The 49ers are a championship-caliber team. They have star quality football players on both sides of the ball. They've played in 3 consecutive NFC Championships, and a defeat in the Harbaugh Bowl. They're led by a quality front office, headed up by GM Trent Baalke, and have an excellent coaching staff including Jim Harbaugh and Vic Fangio. They are a couple of players (and a bulk order of noise-cancelling headphones) away from getting back to the Super Bowl.

The 49ers are led by QB Colin Kaepernick and while you can argue if he is championship-material or not, he certainly isn't a slacker. The 49ers, under Trent Baalke, tend to build through the draft and plug holes using bargains they find in late free agency. They historically draft well, as evidenced by the star-studded roster, including the offensive line. The OL has bookend tackles in Joe Staley & Anthony Davis, solid guards in Mike Iupati and Alex Boone and a veteran center in Jonathan Goodwin. While Goodwin remains a FA right now and Iupati is in the final year of his contract, there are no first-round-value OL on the board justifying such a pick.

The offensive play-makers include WRs Michael Crabtree & Anquan Boldin, TE Vernon Davis and RB Frank Gore. They lost WR Mario Manningham to the Giants and RB Anthony Dixon to the Bills. While the existing cast is definitely formidable, what it lacks is one more threat. It could be a WR, a second TE or even a pass-catching RB to compliment Gore. Without that, I can see the 49ers 2014 season ending yet again at CenturyLink field.

There are a few options that might work here:

The 49ers defense is a thing of beauty. They are well-coached, talented, play with intensity and tackle extremely well. The energy they bring on defense is what I'd like to see from Pittsburgh year-in-year-out.

It all starts with the front seven and they do not disappoint. The DL is headed up by veteran D-Lineman Justin Smith, who is flanked by Ray McDonald and Glenn Dorsey. They have a couple of solid guys returning from injuries in Ian Williams and Tank Carradine, so I'd say depth isn't an issue just yet.

ILB is also a secure position with Patrick Willis and NaVorro Bowman, although Bowman is recovering from a torn ACL. They do have a couple of guys in Michael Wilhoite and Nick Moody to come in as rotations for him.

OLB is another story. While Ahmad Brooks is a solid guy on one side, Aldon Smith has been a pain in the a** for the team. But they do seem to say they'll stand by him, and frankly, there aren't any obvious candidates at this point in the draft who can match his production. So, I'll say they'll stick with him and plug that spot with lower round draft picks/FAs.

The 49ers secondary has been a fire sale since last year, when they lost safety Dashon Goldson to the Bucs, and then they lost another three starters this year in CBs Tarell Brown and Carlos Rodgers to the Raiders, and S Donte "Hitner" to the Brownies. They did draft S Erid Reid last year in the 1st round and he seems to be matching Goldson's production so far. They signed former Colts S Antoine Bethea to replace hard hitting S Whitner (and I mean HARD-hitting). He seems to match up well with Whitner in terms of coverage and run-support. They've also signed CB Chris Cook to a 1-year prove-it deal, but he doesn't seem to be the final answer to the CB problem. Additionally the status of CB Chris Culliver, pegged to be one of the starters at corner in 2014, is up in the air following a hit-and-run arrest in San Jose.

Ultimately, I think Baalke will draft someone who fits a need and possibly one-of-BPA without being a reach. 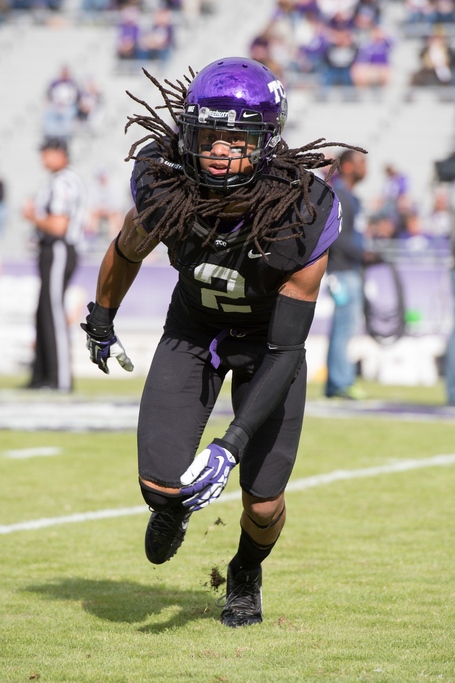 While not the tallest of corners, nor the most physical, Jason Verrett stands out in this deep CB class as one with great instincts and great play-making ability. Should be fun to watch.