With the top QBs, Jadeveon Clowney, and Jake Matthews off the board, the Falcons have a tough choice between two elite prospects who fit their needs. On one hand, Greg Robinson would be a great choice to replace LT Sam Baker and protect Matt Ryan. On the other hand however, the Falcons are really missing a legit pass rusher on defense. For me, the choice is obvious:

Head coach Mike Smith says they won't be transitioning to a 3-4 base defense, but their moves suggest they'll at least be using a hybrid scheme. They've signed NT Paul Soliai and DE Tyson Jackson, two guys who have almost exclusively played in 3-4 defenses since entering the league. While the two are good run stoppers, they're still missing an edge rusher. Their best pass rusher right now is Osi Umenyiora, who is aging and probably only going to come in when they go to sub packages. 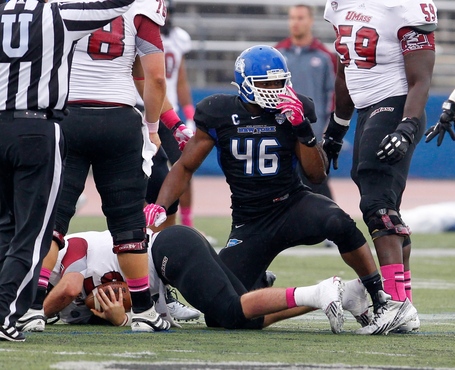 A number of scouts prefer Mack over even Clowney as the best defender in this draft class. He's certainly the safer pick, given the concerns around Clowney. With Mack, they get a premier pass rusher who fits perfectly as a 3-4 outside linebacker, though he's also versatile enough to play OLB in a 4-3 - in a role that could be similar to what Von Miller does in Denver.

With a healthy Julio Jones and Roddy White, the Falcons can still field one of the best offenses in football. The same can't be said for their defense. They need a blue-chip player on that side of the ball. Heck, they need more than one if they're truly going to compete for a Super Bowl.