With the second to last pick of our community mock draft, we've got the champions of free agency - the Denver Broncos. Whether or not their expensive offseason will lead to an actual championship remains to be seen though. Here with the pick is BTSC reader alexryan.

This year's Super Losers were the Denver Broncos. The illustrious Peyton Manning was poised to exit the game at the top of the league... and he choked. He absolutely blew it. Despite having the best weapons and supporting defense of Peyton's career, the Broncos were demolished by the Seahawks.

All for piles and piles of money, and they're still under the cap!-alexryan

John Elway and his front-office staff have done a magical job cutting away weak starters and replacing them with new, shiny, expensive pieces to the team. Gone are both star cornerbacks (Dominique Rodgers-Cromartie and Champ Bailey), both starting guards (Zane Beadles and Chris Kuper), the #2 receiver (Eric Decker), the #1 running back (Knowshon Moreno), #1 middle linebacker (Wesley Woodyard) and a starting defensive end (Shaun Phillips). In comes the league's best available pass rusher in Demarcus Ware, a premier starting corner in Aqib Talib, top-quality safety T.J. Ward, and our own Emmanuel Sanders. All for piles and piles of money, and they're still under the cap!

Having dropped big name after big name in free agency, holes remain at cornerback, guard, and inside linebacker. No linebacker prospects are worth selecting here, although an opportunity at Ryan Shazier certainly would be considered. With Jason Verrett taken (my favourite of all the corners), only one 1st-round-worthy corner is still available in Bradley Roby. He's an instinctive player who suffered a down year and is inconsistent. That leaves picking your favourite guard prospect, and the best one this year is... 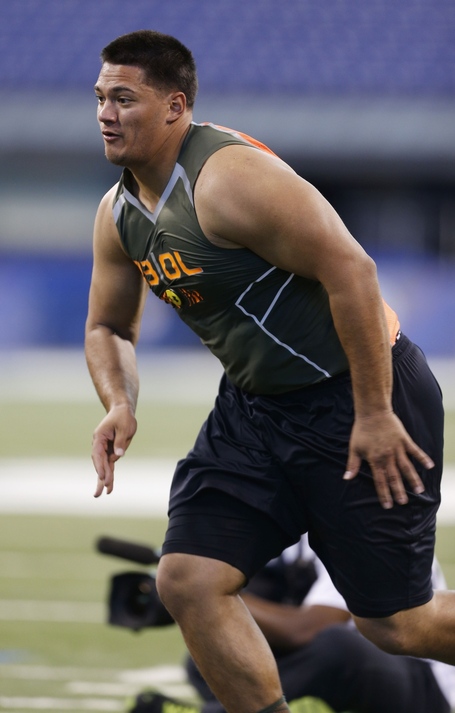 Su'a-Filo is strong at the point of attack and very nimble for a guard - he excels in zone or man schemes, is supremely athletic, and is equally comfortable pass or run blocking. He's earned the number one spot ahead of David Yankey by possessing both polish and upside in equal measure.