Big moves have been made by the Buccaneers this offseason, and BTSC reader The Commish is here to handle all of that for our community mock draft.

The Tampa Bay Buccaneers are a team that is in the process of a massive overhaul - starting in the front office, all the way down to the water boy. Gone are GM Mark Dominik and head coach Greg Schiano, along with most of his crew. The Bucs wasted little time after the 2013 season was in the books, announcing on January 2nd that Lovie Smith was in as the new head coach. A few weeks later, Jason Licht was hired as GM coming from the Arizona Cardinals where he was serving as personnel director. Make no mistakes about it though - this is Lovie's show.

This is how they followed it up...

That is a massive overhaul and I would say they did everything they said they would. They signed all of those players at a good value, considering Verner, Collins, and Johnson were all highly regarded and in demand. This team has only one place to go and it is up. I generally like everything the new regime is doing. But they will be graded most by what they do on draft day - only dealing with one pick each in the 1st, 2nd, 3rd, 5th, and 7th rounds. The 4th and 6th rounders were dealt for Revis and Carimi, respectively (both of whom were just cut). So what do they do? 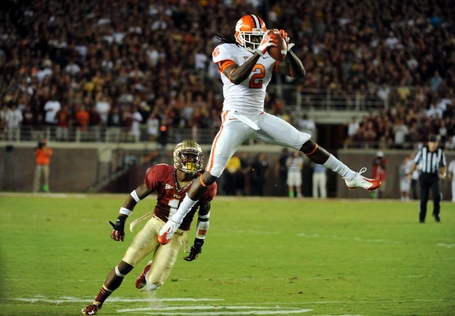 This is an immediate upgrade for an offense that ranked dead last in 2013. Vincent Jackson had another great year, but the rest of the receiving crew was inconsistent and Mike Williams was hurt, not to mention his current problems off the field. Smith and new OC Tedford are no strangers to great receivers - Smith brought Brandon Marshall to Chicago and drafted Alshon Jeffery in the 2nd round, while Tedford groomed DeSean Jackson and recently Keenan Allen at California. Dynamic receivers are important to these guys, and Watkins fits the bill.

Watkins burst onto the college scene from Day 1. Watkins was just the 4th true freshman to garner First Team All-American honors, joining the likes of Herschel Walker, Marshall Faulk, and Adrian Peterson. Watkins closed his collegiate career in grand fashion with a 16 catch, 227 yards, and 2 TD performance against Ohio State in the Orange Bowl (a team with CB prospects that are no slouches). Watkins ran a 4.43 40 at the Combine, and checked in at 6'1, 211 lbs. I would say his game speed is faster than that though - when he gets the ball on screens, he is quick to turn it upfield and hit the accelerator. This attribute separates him from the other top tier receiving prospects in this draft. He's the full package too - with the way he attacks the ball at its high point - and is far and away the #1 at his position.

The Bucs get an impact player from Day 1 with a veteran QB that has worked with some good ones. Throw another few seasons of a productive Vincent Jackson, along with Doug Martin and Bobby Rainey pacing the ground game, and all of a sudden the Bucs offense could be pretty potent.