We've had a few surprises in our community mock draft, and this might be the biggest so far, from BTSC reader VinnySteel.

All right, it's the real and original PURPLE's turn up! (Not those johnny-come-lately imposters hailing from that giant suburb of DC.) Before I get to football, I must explain I chose the Vikings because I lived in Brainerd, MN for two years. While there, I got to know some of the greatest people and see some of the most beautiful places on earth. Truly- and I'm about to stray from football for just a second and do something that will ire every true citizen of the "Great North"- I'm going to give you a tip on one of the hundreds of "secret," natural places they wish no one knew about. About 100 miles north of city of Duluth, you'll come to the Caribou Creek- one of thousands of tiny tributaries that feed the raging sea known as Lake Superior. I encourage you to time a visit for a really hot day in the middle of summer, put on some old boots and hike right up the bed itself, splashing the crystal cool water all the way. A little more than a mile inland, you'll turn a bend- looks like any other bend you've seen along the journey so there's no way for you to anticipate it, (which is just like God wanted it)...in any event, once you make the turn, you will be standing on the edge of a 40 foot rock-sided lagoon, about 20 feet deep the bottom of which you can see as clearly as the back of your hand. But that's not the best part- the lagoon forms at the base of a 20-30 foot waterfall from the top of a pyramid shaped rock spire, and all the way up and down the sides of the formation and all around the lagoon are thousands of lupines, (tall vibrant flowers in purple, blue, white, and an occasional pink.) Honest to goodness- you'll say "this can't be Minnesota...I must have made a wrong turn in Hawaii and landed in the Garden of Eden." It's really that beautiful.

Okay- so any way. Sorry for the divergent path...on to football...

The Minnesota Vikings had a disappointing season last year record-wise (despite being able to somehow defeat our Steelers in London). They had a dismal record of 5-10-1. Making that victory over the Steelers sting even more is the fact it was their only victory in their first ten weeks. Ugh! The poor record resulted in a complete overhaul of the coaching staff and a number of personnel changes on the field as well. The Vikings were among the most active teams in the league in free agency.

They let the popular Toby Gerhardt walk as well as the core of their once dominant defensive line- Kevin Williams and Jared Allen follow. But they signed their DL back ups Fred Evans and Tom Johnson for a fraction of the price of even just Williams, and splashed in free agency by signing Linval Joseph from the Giants. Pairing him with Everson Griffen whom they have high hopes for, not to mention one of their two first rounders from last year- Sharif Floyd- should restore the life threatening nature of the very front edge of the defense this year. They even potentially stole a great back up for the DL from Chicago in Corey Wotten, who had 10 sacks the last two years but struggled with injuries and signed him to a complete "show me" deal. They then moved to the back of the defense and signed corner backs Derek Cox from San Diego and Captain Munnerlyn from Carolina. Both should be huge upgrades for their team.

Offensively, they retained Matt Cassel at QB and resigned Jerome Simpson for depth at wide receiver.

They even improved the special teams by bringing on Marcus Sheels to return punts.

So- you think Mike Zimmer is a defensive minded coach? For those of you who are counting, that's 9 signings in free agency- 7 of them on the defense. So what does that say of their draft strategy?

The way this draft has played out so far would make an extremely challenging day for the Vikings, as they have one massive glaring need above all others - QB. Because of this- if the Vikings got wind of anything playing out as it actually has here- I think they might have been making every effort possible to trade up to get one of the top quarterbacks (except for Manziel)- new coach Mike Zimmer made such disparaging remarks about him after his pro-day it would be difficult to imagine him being able to recant adequately enough to start their relationship right. However, I would expect them to pursue Blake Bortles or Bridgewater (otherwise known as Randall Cunningham 2.0.) QB is such a need that some have thought it possible the Vikings might try to arrange a trade down with the Patriots in exchange for draft picks and Ryan Mallet. They desperately want someone to groom behind Cassel- and the common belief is Christian Ponder, for as nice a guy as he is, has had his last starting chance. Mike Zimmer must have had enough of standing on the sidelines of a team with everything at a championship level except for a very average QB from his days in Cincinnati. Maybe they would consider drafting Carr here- and it is a definite possibility. However, I would have a stronger conviction they would wait until the second round (or trade up into the latter part of the first) and go for Zach Mettenberger.

BUT, thankfully for this draft, Minnesota does have other needs left to address.

They do have a need at guard, but 8 is too high to pick a guard and the rest of their line is solid, as they were able to rank 8th in the league in rushing yards last year despite having a dismal passing game and no one in any stadium believing anyone except AP was getting the ball much of the time.

Despite snagging Cordarrelle Paterson last year and resigning Simpson, WR could definitely be a possibility for them with Evans still on the board. Zimmer may have dissed Manziel but he was still present at the Aggies pro-day. Perhaps he was never there to see "Johnny Football" at all. Evans and Patterson would be quite a challenge for any defense to cover almost no matter who is heaving the rock. 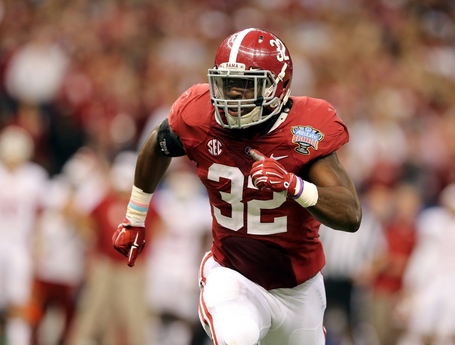 However, I just can't shake just how incredibly defensively focused Mike Zimmer is, and I think he is going to embark on building a team whose dominance is in the mold of the Seattle Seahawks. I also believe he will be thinking stability as the next two years will be challenging enough playing at different fields while their new stadium is constructed. They currently have only one starting linebacker of proven caliber in Chad Greenway. They are very high on their young guys in Audie Cole, Michael Mauti, Gerald Hodges, and Jasper Brinkley. But none of them have the pro-bowl level potential of some of those left on the board. They need a tough, smart, athletic, stable anchor in the middle of their defense and it's obvious Zimmer likes to find guys who have proven a thing or two over a rare and undiscovered gem. Therefore- while some may think it a reach- I think the Minnesota Vikings hold off on QB, guard, and receiver until later in this deep draft and sign C.J. Mosley.