Future of the Steelers: Breaking down quarterback contracts over the next few seasons

Starting with the quarterback position, the Steelers' contract situations with those players is set through the next two years, barring extensions. But the contract of Big Ben still looms on the horizon.

Share All sharing options for: Future of the Steelers: Breaking down quarterback contracts over the next few seasons

Discounting their 2014 draft picks and prospective undrafted players, the Pittsburgh Steelers have just 27 players signed past this season.

And six were selected during last year's NFL Draft.

PITTSBURGH -- The Steelers depth at quarterback is set for the near future, at least, as starter Ben Roethlisberger, backup Bruce Gradkowski are signed through next season. And last year's rookie, Landry Jones, is under contract through the 2016 season.

So, the Steelers certainly don't need to take another one during this year's NFL Draft, May 8-10, but they must make decisions for their future. The club generally has re-signed key players with two years remaining on their previous contract extension. Roethlisberger falls into that category.

Roethlisberger, 32, signed an eight-year, $102 million agreement in 2008, with two years left on his original contract. So, it would appear that the time has come again for a new deal.

The Sad Story of Seantrel Henderson 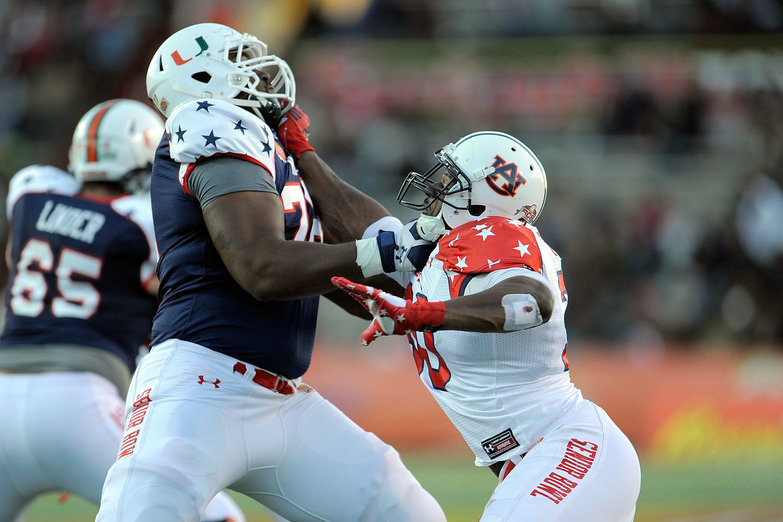 A fantastically gifted high school player underachieved in college, and most recently, didn't complete his workouts at his Pro Day. BTSC's Neal Coolong "knew him when."

"We've got to have Ben retire as a Steeler,'' team president Art Rooney II said after last season. "There's no doubt about that. When both sides are able to come together on an extension. I don't know when that will be, but there's no doubt we look at Ben as somebody who's going to be here for the long term and hopefully five or more years.''

There's still time for the Steelers to re-sign Roethlisberger, of course, but the team has not broken a policy to not negotiate during the season. So, there's that deadline in early September, but it's certain to get done at some point. Despite missing the playoffs with 8-8 records the past two seasons, the Steelers to reach the post-season without Roethlisberger.

In his 10th NFL season, Roethlisberger hit his stride when the Steelers ran the no-huddle offense. He was among just three Steelers to play every snap this season and threw for 4,261 yards on a team-record 375 completions. Roethlisberger also surpassed the Steelers' career mark in touchdown passes. He has 219 overall and helped the Steelers finish on a high note.

A decision also must be made on Gradkowski and Jones. Gradkowski signed a three-year, $4.95 million contract before last season. His base salary is at $1.55 million this season and the next one and yearly cap hits at $1.833 million. Gradkowski will be an unrestricted free agent after the 2015 season.

Gradkowski, 31, did not play a snap last season and only has 11 starts in 13 career games through eight NFL seasons. He's a serviceable backup. Maybe Jones will be one in the future, but neither costs enough to be of a concern. Both could get extensions at some point, but there's no urgency.