Our community mock draft continues with BTSC reader Sean Geddes representing the Bills - a team that will hold a few joint practices with the Steelers during training camp this year (pending league approval).

The Buffalo Bills enter their second draft under Head Coach Doug Marrone, looking to continue the success they had in rebuilding their roster with young talent last year. After drafting EJ Manuel with their first pick, they came back in the 2nd and 3rd rounds with two receivers who bring complementary talents to the position with route-savvy Robert Woods and speedster Marquise Goodwin. In between the wide outs, they grabbed Kiko Alonso - who looked like the leader for defensive rookie of the year early last season. While they didn't benefit greatly from the back-half of their draft, that is still a good base to build off in year one. 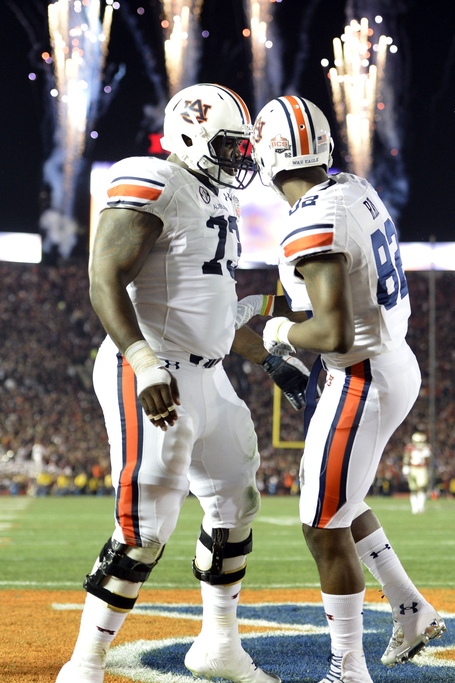 Cordy Glenn has been a solid young left tackle, and will remain one, as Robinson comes in to eventually lock-down the right side - and should provide an immediate upgrade in the run game over the incumbent Eric Pears. Robinson would pair with former Steelers 3rd round pick Kraig Urbik, and provide Buffalo with two massive road-graders on the right side to clear lanes for CJ Spiller, Fred Jackson, and new addition Anthony Dixon. Perhaps Pears kicks in to guard, where he could compete with newly acquired Chris Williams for the job that Doug Legursky (another former Steeler) should vacate this off-season.

Cordy Glenn has been a solid young left tackle, and will remain one, as Robinson comes in to eventually lock-down the right side-Sean Geddes

As important as it is to protect a quarterback's blind side, for some young quarterbacks it can be almost equally important to minimize pressure right in their face as well; EJ Manuel seems like one of those quarterbacks so far.

A talented weapon at an offensive skill position is tempting here, with both Mike Evans and Eric Ebron available. The Bills could really use some help on third downs when the time comes and they need to pass, and either of those big bodies would likely help out in that department. However, newly acquired WR Mike Williams could help also, and the draft is rich with talent that could be had later to do the same job.

Defensively, the Bills could still add a safety and corner. They may look at those positions here in almost any other scenario, but this is too much of a talent to pass up - no defensive talents available match what the 6'5", 332 lb road-grader with 35" arms can bring right away to the Buffalo offense.

There are still holes to fill on both sides of the ball, and arguments can be made for a few other players to fill them here at 9th overall, but this just comes down to the best player on the board.