Rounding out the top-10 of our community mock draft is BTSC reader JDSpartan, picking for a Lions team that saw their playoff expectations completely dissolve after a 1-6 finish to their season (a skid which began with a loss to the Steelers).

Ahh, my Lions. What to do with my adopted B team? After being born in Pittsburgh to parents from the Allegheny Valley, but spending my pubescent and college years in Detroit and East Lansing, which promising young player should I grant to my second favorite team, regardless of their sad history? Tough call because the Lions would be thrilled with this board.

Let me be clear - Martin Mayhew is a pretty solid General Manager. He orchestrated the ridiculous trade which sent Roy Williams to Dallas for a 1st and 3rd round pick. He has snagged solid free agent players like Stephen Tulloch, Nate Burleson, and now Golden Tate. He saw the value in Joique Bell, an absolutely incredible and versatile backup running back, and took the chance on Ziggy Ansah, which paid off to the tune of eight sacks despite missing some games and having nagging injuries. Mayhew is a good GM, whose biggest flaw is blowing it in the 2nd round with injury-prone players. But the key thing to know here is he ALWAYS takes the best player available - how else do you land with three 1st rounders in a four-year period on your defensive line?

midseason the Lions were in the driver's seat for the NFC North, when it was the offense that went off the rails-JDSpartan

That won't be a problem here though. Defensive line isn't a candidate given the Lions' needs: on offense - primarily wide receiver, tight end, and center; on defense - safety, corner, linebacker, and defensive end (though I firmly believe late rounder Devin Taylor is going to be solid starter at DE, after playing well in spot time last year as a rookie). Let me be clear again... this defense was decent last year - midseason the Lions were in the driver's seat for the NFC North, when it was the offense that went off the rails. But with decent backs and a surprisingly great offensive line, don't count them out.

Those needs in place, this pick comes down to Justin Gilbert, Mike Evans, and Anthony Barr. The Lions have been shredded by elite quarterbacks; in their defense though, most people are. Furthermore, the Lions seem to love the many young corners by they've taken outside the 1st round - including Darius Slay in the 2nd and Bill Bentley in the 3rd. For those reasons, I'm making [BTSC managing editor] Neal happy and ruling out Justin Gilbert.

That leaves Evans and Barr. This is tough. Mayhew wants the best player available, and head coach Jim Caldwell has stated he loves receivers with great hands (which led to the signing of Golden Tate, who Pro Football Focus says has dropped only 5 passes since 2011 - best in the NFL), which would favor the strong-handed possession receiver Evans. On the other hand, Caldwell has also stated how he wants a pass-rushing linebacker, which screams Barr. So what to do, given the high upside of both players? 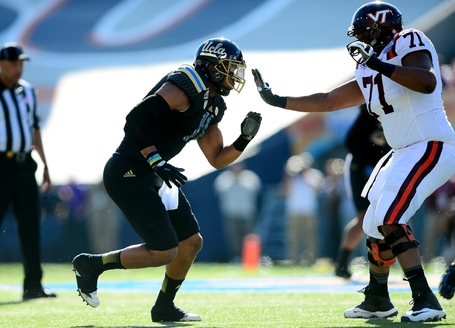 First, Mayhew has no problem with raw players, as we can see with Ansah. Second, Barr could easily be the best player available, and Caldwell did basically say he wants a player just like Barr - with his incredible pass-rush ability and potential. Barr is a tremendous talent - to be honest, I think he and Evans are about the same in terms of both overall talent at their respective positions, and how raw they are right now. Given Tate's signing (which I love) and the hires of the coaching staff to improve Stafford's decision making and accuracy (let's not forget, this 26 year old has already had a season with 5,000 yards and 41 touchdowns), I think the Lions go defense and take Anthony Barr.

(Ed. Note: asmith87 was originally scheduled to pick for the Lions, but happened to be out of town this past weekend when I was trying to get in touch with him. Late last night I reached out to JDSpartan to swap picks so I wouldn't be rooking anyone out of an opportunity to participate. I did hear back from asmith87 after the swap, which he graciously accepted.)