The Steelers pick edges closer in our community mock draft, but before then, we've got the Giants with BTSC reader omara891.

Giants fans must be licking their chops seeing the talent still available with their pick at 12. Three names will stick out to them: Taylor Lewan, Eric Ebron, and Mike Evans.

Taylor Lewan has the potential to be a Pro Bowl-caliber tackle for years to come. The Giants have made great strides to improve what most would consider the worst offensive line in the league last year - Geoff Schwartz was a great pickup at left guard and J.D. Walton, although still a big question mark, gives the Giants a better option at center. The biggest question mark for the Giants revamped line is left tackle, where the struggling Will Beatty will slot in. Presumably, Lewan can come right in and take that position, but I think the G-men will avoid spending a 1st round pick on the O-Line, as it commanded so much attention during the free agency period. Off-field issues also lead me to believe the G-men will avoid Lewan.

Next up is Eric Ebron. I think the Giants brass believes he would be the pick they will be making come Draft Day. The Giants haven't done much to improve their tight end situation (though the signing of Kellen Davis helped the dire situation a bit). They still need a number one TE and many fans think the draft is where they can find their go to. Ebron is certainly a pick that can fit the bill... yet, I don't think the Giants will take him when they see that Evans is still on the board. Ebron still isn't a great blocker, something the Giants will look for in a starting tight end. And I think the fact that Evans is on the board will lead the Giants to look to take Jace Amaro or Austin Seferian-Jenkins in the 2nd round, even if they have to trade up to do so with. 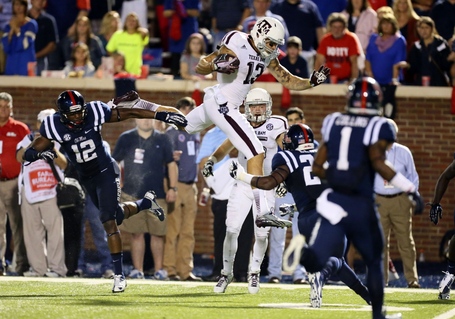 With the departure of Hakeem Nicks, the Giants need a true #2 on the opposite side of Victor Cruz. Rueben Randle and Jerrel Jernigan are much better suited to fight it out for the slot receiver position. Mike Evans is the man for the #2 receiver job - a massive receiver, standing at 6'5. He has the ability to physically dominate cornerbacks and if the G-men draft him to play in the NFC East, he can put a world of hurt on the notoriously weak pass defenses of the Cowboys and Redskins.

Evans has the potential to be a significantly better version of Hakeem Nicks; something the Giants absolutely can't pass up. Especially after a year when Eli Manning spent a majority of his time yelling at his receivers for running wrong routes (cue Manningface). Mike Evans' hands, height, and route running ability will have Giants' scouts drooling and give them the best opportunity to get back to the playoffs.

In the first round the Giants will go BPA - Best Pick (and Playmaker) Available. He edges out Lewan and Ebron, who might fill more immediate holes but won't have the overall impact that Evans will.