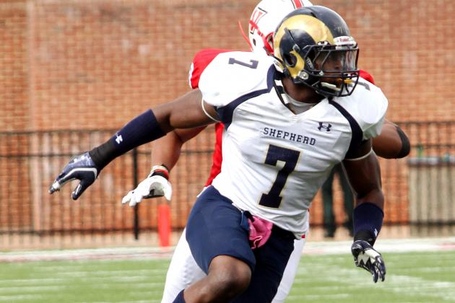 Once in awhile , there are draft prospects that can be very good in the combine that make fans of their respective teams shake their heads in disbelief as to why their team didn't draft the player . One's missed opportunity can be another's treasure. The Steelers may have found their undrafted free agent treasure in Shepherd's Howard Jones.

If a player's performance at the NFL Combine was the only criteria for draft selection, Howard Jones probably would have been a first-round pick. The first player from Division II Shepherd chosen for the combine, Jones put up the third-best 40 time (4.60) among defensive linemen, had the best vertical jump (40½ inches) and was second in the broad jump (124 inches). The 6-foot-2½ Jones displayed so much athleticism at the 330-player combine, which features some of the top athletes in America, he immediately was projected as a mid- to late-round draft pick. "I thought I'd go to the Cowboys or Miami or Arizona," Jones said. "I heard fourth round (on)."

Despite getting draft-day calls from the Browns and Cowboys, Jones wasn't selected. He ended up signing with the Steelers as an undrafted rookie free agent after they outbid the Cardinals. Jones was as surprised as anyone. The Steelers had talked to him only briefly at the combine, and other teams showed more interest. "I know they pass rush tough here. They love pass rushing, so I definitely had to choose the Steelers," Jones said. "They've always had pass-rushing linebackers, quick linebackers, and I definitely feel I can fit in the role." The Steelers have had success with athletic players who weren't drafted — James Harrison and Willie Parker among them — and Jones is hoping to be their latest success story. Jones likely wasn't drafted because of his level of college competition, his age (24) and the fact he's a very rough-around-the-edges pass rusher who will require considerable coaching and patience.

Also, he'll be a linebacker in the NFL and not a down lineman as he was at the combine and in college. "I know I need to work on my knowledge of the game," Jones said during the three-day Steelers rookie minicamp, which ended Sunday. Still, considering he didn't require investing a draft pick or much money, Jones is an intriguing pickup for a team that is attempting to get younger, faster and more athletic on defense.

A wide receiver at Freedom High School in Woodbridge, Va., Jones was contacted by Virginia and Virginia Tech but didn't qualify academically. After sitting out a year, he ended up at Shepherd, a 4,400-student school located about three hours from Pittsburgh in West Virginia's eastern panhandle. "I wanted to go to the smallest school that recruited me," Jones said of Shepherd, which hasn't had an NFL draft pick since 1979. He lifted weights while redshirting for another year and, as his weight increased from 197 to 235, he was shifted to the defensive line, though he was fast enough to be a gunner on special teams. A finalist for Division II defensive player of the year last season, Jones ended his Shepherd career with 34½ sacks, 71 tackles for loss, eight forced fumbles and four blocked kicks.

Jones already knows what the Steelers want him to do: be a pass-rushing specialist and special teams player. "I definitely feel I can fit in that role," he said. "(It's not Division II), but it's still football to me and I've been playing it since I was 5, 6 years old. It's still the same game to me." While he has much to learn, and there is much to his game that needs polishing, Jones doesn't feel overwhelmed. "It's matchup against matchup," he said. "It's not that someone else is that much better than the other guys — everyone is good — (but that) you've got to step up to the plate."