Steelers Film Room takes a look at what veteran receiver Lance Moore can bring to the Steelers offense in 2014.

Steelers Film Room has been explaining how the influx of speed to the Steelers offense can be utilized to stretch and attack defenses.  This time, we will examine one player in particular, Lance Moore, and how his veteran savvy can be an asset for the Steelers this year.

First, to review the spacing concepts used in all effective passing games, we will quote the great Norm Chow:

The way we like to attack a defense is with the passing game remaining curl, flat, four verticals and creating triangles and mismatches against man-to-man coverage.  That is a basic strong-side pattern for us.  We try to create triangles.  Everybody understands horizontal stretches, routes and vertical stretch routes. At BYU, we like to develop oblique stretches.  They are all done to create stretches involved in a pass offense.

There you go.  Now, Lance Moore fits into all of this because he understands spacing and leverage in attacking a defense.  Moreover, he understands the way defenses try to blitz and defend these concepts.  To illustrate the point, let's take a look at the Y Stick route. 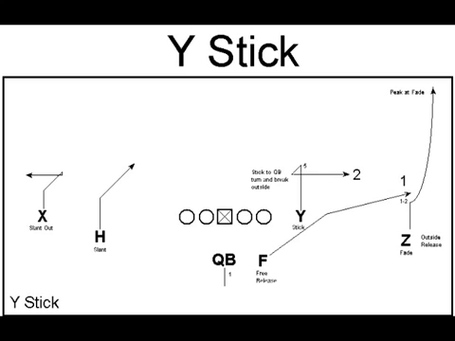 You can see with the image the vertical and horizontal stretch of the defense.  Now, it is up to the slot receiver to find the necessary space in the middle of the field.  The Y would execute the route as shown against man coverage.  Against zone, he might settle down much quicker as the linebacker or safety expands into their zone responsibility.  Keep in mind, if the defender does not expand, the horizontal stretch becomes wide open.

Let's take a look at the play in action.

Plays like this will not make highlight reels, but they win football games.  The fastest way to improve a passing offense is to get better at throwing 3 step routes like this.  When done well, they are almost impossible to defend.

I love Jerricho Cotchery, but I believe Lance Moore could potentially be a huge bonus for the Steelers in the slot.  Through the latter parts of Hines Ward's career, Ben Roethlisberger consistently hit Ward on these types of throws.  He trusted Ward to be where he was supposed to be.  I expect the same thing from Moore.

Finally, routes like this are important because of their utility.  They work against anything; thus, no huddle teams run them a lot.  It allows an offense to keep a rhythm, tempo, and the defense on its heels.  The fact that the Steelers installed the no huddle so early this year is telling.  Combine all of this with an improved run game, the potential for the Steelers offense in 2014 is tantalizing.