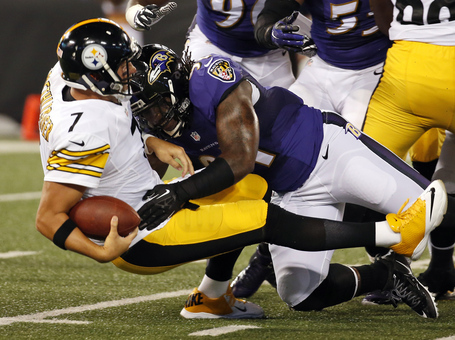 Ok, so that didn't go quite as planned. I took a cold, long shower after that one. Is everyone ok? Is anyone still here? Mic check, 1,2,1,2.

So our beloved Steelers got dominated by the Ravens in a thursday night away game. It was as bad as.... nah I'm leaving that one alone. I picked the Steelers to win because I didn't think our offense would be that putrid. Seriously, two field goals? Who saw that coming? We've had three field goals the last three halfs, thats pretty bad. Looks like there is some work to be done before the Steelers can be a playoff team. But I still believe its possible.

The game could have gone a different way if the offense just didn't look so out of sync. The Justin Brown fumble, then Ben missing Justin Brown wide open on a third down ( that would have went for big yardage too, no one was near Brown ), then Antonio Brown going out, then Ben missing several other throws that could have extended drives and given the defense more time to rest. Just to make sure the nail was in the coffin, we turned the ball over two more times, once in our own territory.

I'm not getting into penalties here unless its really bad, but I honestly thought the defense held up nicely through the first three quarters. If you consider the terrible position that the offense put them in, then it isn't as bad as everyone is making it. Then again I didn't have high expectations for this defense to begin with, at least not at the beginning of the season. But the defensive line was getting blown off the ball at times and that became more consistent as the game went along.

I'm not blaming the coaches here, they didn't play well, we all think Cam Heyward is a good player but he was dominated thursday night. As for the rest, Cam Thomas, Brett Kesiel, Steve McLendon, and Stephon Tuitt, they didn't fare much better. We're going to need Heyward and Tuitt to step their play up because I honestly believe that Kesiel, Thomas, and McLendon have maxed out their potential. The bright spot is that the score could have been worse, they had two or three defensive stands that led to field goals, otherwise instead of 26 the ravens could have 35 or 42 points.

So we're going to need the offense to carry the team until the defense returns to its dominating fashion. Hopefully we can start to see some of that this week versus the Panthers.

Yeap, *drinks a big gulp of Steelers kool-aid and stretches*, we're just going to chalk that up to thursday night woes, the Steelers haven't won a thursday night game, on the road since....December, 20 2007? Wait, is that right? That can't be right... Our last road thursday night win was a 41-24 shalacking of the then-helpless St. Louis Rams. Our following road Thursday night games were as follows

So we got 10 days to get better before the panthers game. And we're going to need it. The panthers are a run-first team in as true of a sense you can have in today's NFL. They want to run the ball and Cam Newton, if healthy, will give us fits running the ball. He's what Terrelle Pryor wishes he was. And he does that Super Man thing when he scores a touchdown. You may have seen that. Hence, the Man of Steel video, and just like the video Cam has maddening things to his game that doesn't make any sense. He'll throw a perfect strike 40 yards down the field, then throw a dirt ball from the 10 yard line - missing a wide open receiver in the end zone. Sorta like Louis Lane falling while everything is getting sucked into a black hole. Yes, hollywood thinks we're all dumb and some of you are. :) He also can run it for 40 yards but at the same time he can get sack for holding onto the ball too long, sounds familiar right?

Allow me to voice my displeasure with owner Jerry Richardson. This is the same guy who cut salary to make his team terrible before the 2011 CBA agreement. Then cry to the city of Charlotte to make them pay for stadium upgrades, by cry I mean hint that he may move the team. This is the same owner that allowed his GM to give 50m contracts to not one but two running backs neither of whom are Adrian Peterson and Adrian Peterson's clone. And they gave a 40m extention to a quarterback who was never all that great and tanked their playoff game in 2008 ( we thought Neil O Donnell was bad, Jake had 5, count them 5 INTERCEPTIONS). Then he cries about not sitting Greg Hardy who was convicted of choking and threatening to kill his girlfriend, over Nelly. And if you don't know who Nelly is, just know he hasn't had a popular song since 2005. I really don't like Jerry Richardson, he doesn't care about the sport, he doesn't care about the players, he just cares about making money, which I mean I don't necessarily knock, but come on. There are 32 NFL owners in the world. Its a privilege, not a right. At least show that you enjoy the games. 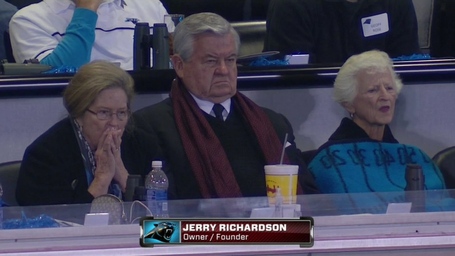 Seriously, who pissed in his Cheerios? You're a millionaire several times over, you own a NFL franchise, and you have a great up coming team, again. Jeez, get this guy outta here.

Now its time to say some nice things about the Panthers.

They have my draft favorite Kelvin Benjamin who looks good in his first couple of games in the NFL. Although I don't think I would trade him for Shazier though. Cam is a good quarterback too despite his detractors. Many of the rookie passing records Luck broke, were originally Newton's records.

The Panthers defense is a top three unit in the NFL. I can't think of a better front seven other than Seattle's, and maybe San Fran. But if you can give Ben some time he should be able to carve up their secondary, that's their weak point. Even though they had a good showing last week. I live in North Carolina. I hear all the panthers stuff, their fan base is similar to ours, without all the Super Bowl hopefuls and the full confidence in their starting quarterback, some actually want to see Derek Anderson start. Excuse me for a second.

I'm done for real. No seariously, I'm done. This is going to be a low scoring game. But I think the Steelers lose this one. That defense is just too good and the panthers are going to run all over us. The score I predict is 17-10, Panthers. If the offense shows up and scores 20+ points, we'll win but I just don't see that happening right now, maybe against the Bucs at home. And I'm out!