First lets take a minute to look back at the Browns game.

That was probably the best halftime feeling I've had in a long time. 27-3? In all my optimism I couldn't predict that. We were destroying the Browns. I mean literally destroying them. 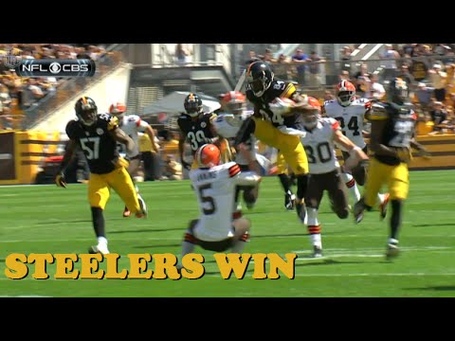 It was glorious!!!! I don't remember much after half time. I've rejected that reality of the 2nd half. All I know is that we won 30-27, huh? must have put Landry Jones in the game at half time and the back up defense. Aw well, moving on.

Now turning our heads towards the Ravens. Where do I start? First of all, we have to address the Ray Rice situation. Don't give me that, can't we talk about football, crap. Football isn't important enough to just sweep this away. Sure we've talked about this all summer but thats the way this works, the video leaked last night, so we have to talk about this again.

I hope we beat those Ratbirds by 50. I'm disgusted by their crappy organization and their crappy fans who cheered Ray Rice in the preseason, and their crappy coach. I don't accept that the NFL didn't see the video that was released today nor do I accept that the Ravens organization didn't see it. And EVEN if they didn't how irresponsible is it to weigh on this case without all the information/evidence? Sure the legal process hadn't convicted Ray Rice of anything but that doesn't give the Ravens/NFL a pass to commit the same folly. This isn't accusations, this isn't something that can be explained away, we have the video of what exactly happened. This video has existed ever since it occurred, we knew it existed. I get that Ray Rice was a model citizen and worked with charities. But you have to deal with what happened and do what's right.

And with that, how the heck is Greg Hardy not suspended indefinitely? Greg Hardy of the panthers was convicted on two counts of domestic violence this summer and played last week for the panthers!!! He choked and threaten to kill his then fiance. But we don't have the video. Do we need any more proof that the NFL just cares about PR than that???

As for the game, I'm not going to be fooled, while Flacco passed it 62 times against the Bengals I doubt he does so against the Steelers. Anyone watching the game last week would be trying to test their run game on the Steelers. Which is kinda why its hard to gauge how good your team is after Week 1. Is the Browns running game that good in the second half? Or is the Steelers run defense that bad? If the Ravens can run on the Steelers' defense we'll know its the latter and get ready for a long season on defense. One thing we know for sure, the Browns defense is no seattle's defense. Thats an inside reference, hopefully the person who said it will read it. There isn't anything nice I can say about the Ravens right now, so I won't.

I actually think our offense will have a tougher go of it against the Ravens defense than they did against the Browns defense. Its something about playing in Baltimore and its hard to trust the Steelers offense. They were great in the first half, no so great in the second. But still good enough to win the game. I do think that they'll be good enough to beat the Ravens. So we'll find out more about the Steelers this week than we did last week. Is the defense really as bad as it was in the second half? Can the offense be as good as it was in the first half? I always said, if they start the season 2-0, they're a playoff team, going into baltimore and winning on a short week is what playoff teams do. Its not to say that they can't make the playoffs if they start 1-1. Its just saying the Steelers are showing signs of being a team that is capable of winning enough games to qualify for the playoffs.

With that I pick the Steelers to win 28-24. I expect both offenses to have some success neither of these defenses are what they were and I think the Steelers offense is better than Baltimore's offense. I would have picked the Ravens to win this game but with the Ray Rice incident surfacing again this week, I think there are just too many distractions for the Ravens to deal with on a short week.