This is a piece I wrote for a Steelers website that I post at and have written front page articles for in the past: Steel City Insider. I wanted to share it with the good folks at BTSC. I think it offers a unique perspective into how the Steelers operate during the draft. Hope you all enjoy it if you're willing to put the time in.

"Senquez Golson was targeted to be picked in the second round," according to GM Kevin Colbert, "Without a doubt we were coming out of the round with a corner".

That's a pretty powerful statement from Colbert, and in it was given in direct response to local and national media reports that the Steelers had been caught flat-footed in a draft day trade up by the Ravens to steal the player they really coveted: Maxx Williams

Is this what really happened?

It depends on who you talk to, but without proof, other than relying on the credibility of one Kevin Colbert, what's not to believe? As fans, Kevin Colbert has earned our trust on how to build a winning organization by bringing home two Lombardi trophies. That goes without question. On the other hand, I'm smart enough to know that in business and politics, it's what's not said that can be just as important.

This normally is where the story should end, but not this time.

I'm sure everyone is familiar with the phrase "a camera doesn't lie." Individuals know that I (along with another poster, Heinzsight) have been breaking down pictures taken from the Bill Nunn Draft Room since 2010. And while the pictures are usually taken at a distance and have been doctored so individuals can't see too much detail, I have become (over the years, by spending countless hours breaking them down in relation to when in the draft those pictures were taken) quite successful in accurately recreating the Steelers war room.

From pictures this year I've formed my own opinion on what happened in round 2. I'll leave it to you to come to your own conclusions so perhaps the end result is we can share in intelligent dialogue that increases our knowledge as fans on how the Steelers really operate. Consider that the end goal.

Before diving into this year's draft let's review what comprises your typical NFL draft room.

Below is a picture as you enter the Steelers draft room (All photos taken from Steelers.com official website). I consider it pretty typical as far as layout, but very modest in comparison to others I've seen. Quick summary, the board to left on the yellow back wall is the NFC team rosters arranged by position. The board to the right of the yellow back wall is their Horizontal Draft Board. The board on the white far wall and to the right of the Horizontal Draft Board is their Vertical Draft Board. We'll get into more detail and the purpose of those as we continue. 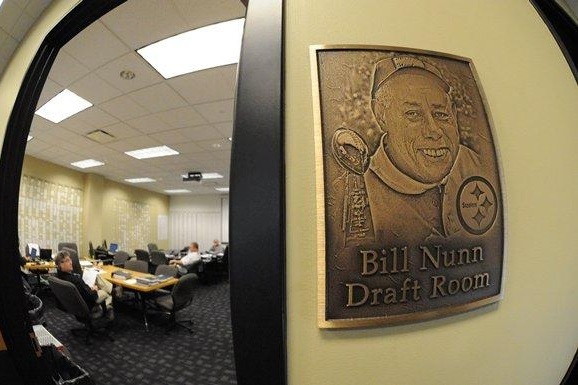 The end result of a team's annual scouting evaluation of draft eligible talent is their draft boards. This is their hierarchy of prospects that the months and months of debate and evaluation has produced. A vertical draft board is just what is says -- a ranked list of prospects from 1 to say 300. And when it's your turn to draft you simply draft your highest ranked player. In other words a true Best Player Approach (BPA)

The Steelers vertical draft board from left to right has 11 columns -- Rd 1 thru 7 followed by 4 free agent columns. Each column has 32 rows for a total prospect ranking of 352 players. Looking at a picture from 2011, 1st round: 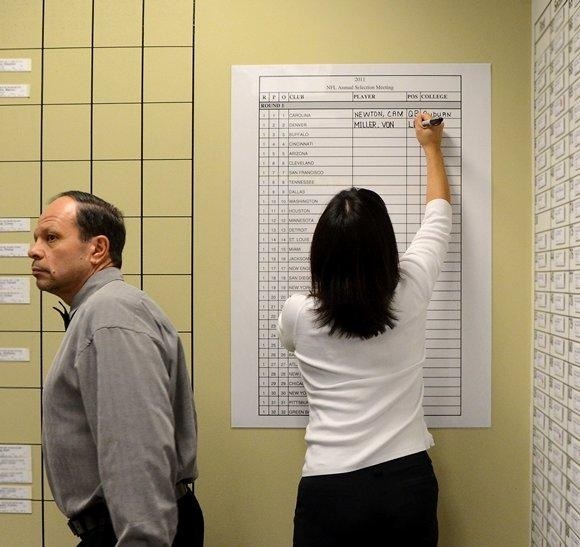 Notice that Cam Newton and Von Miller have just been selected. It's the very beginning of the draft. Also notice on the Vertical Draft Board that the 1st and 10th prospect cards are missing in the Rd 1 column. Therefore, Newton and Miller were in some to be determined order ranked as the 1st and 10th overall rated prospects for 2011. But, how does this reconcile with the horizontal draft board? Let's examine its purpose next.

As mentioned previously the vertical draft board represents a true, BPA, numbered approach to ranking prospects. If it was this simple all teams would just draft from their vertical board. But, the real truth is teams rank prospects based on the current construction of their team; identifying strengths and weaknesses and building that into their draft board. The output of that exercise results in a team's Horizontal Draft Board (HDB). Whereas vertical is true BPA, horizontal represents BPA at position of relative NEED. Most, if not all teams, draft primarily from their HDB. Looking at the horizontal board from 2011: 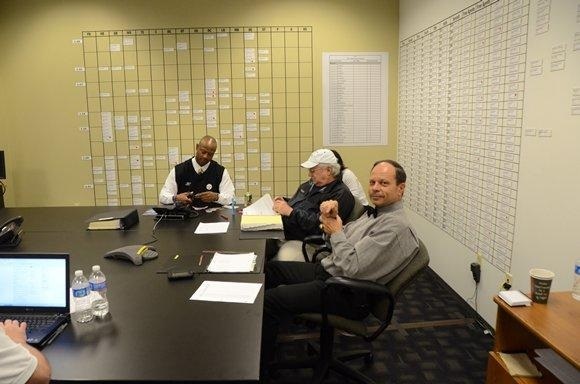 The HDB is broken down into 17 columns and 14 rows. Of the columns starting from left to right the first 14 columns are broken down positionally as shown above. The remaining 3 columns to the right are for ST and Kickers and rarely have players in them.

This board is established by ranking players within their position vertically and then against the other positions horizontally resulting on occasions where prospects have in effect the same draft grade. Scheme fit, character and medical flags are also factored (indicated by red dot/cross) resulting in a final board of from 140 - 180 players. From this the Steelers will draft the top rated prospect from the board but if two players with the same grade are under consideration then the prospect that gets drafted almost always is at the position of greater need. In a nutshell that's the way it works.

Getting back to 2011, notice that the 3rd (QB) column has two placards in the first row ranked approximately 8th and 10th overall. In the 11th (LB) column you have one placard at the very top, ranked 1st approximately the same as the top DE in column 13. Reconciling both boards we can now deduce with 100% confidence that Von Miller was their number 1 rated overall prospect and Cam Newton was rated 10th overall. Keep in mind as players are selected the placards come off both boards.

To expand on HDB, one can assume the 14 rows represent the top/bottom of each round but that's not the way it works. Instead they group by talent grades which can loosely be approximated into rounds. First, one needs a better understanding of how teams grade college talent and how those correlate to the placards running along the left edge of the HDB.

There are probably more of them out there but I'm aware of two primary grading scales: National and BLESTO. National is the more prevalent grading scale used in the NFL, however, the Steelers use a version of BLESTO. For this exercise I will use the National grading scale:

Notice the wide range in scale for the top rated prospects. Generational players are so rare that for practical purposes aren't normally considered. Most prospects therefore fall into the range 8.0 - 4.5. As to Colbert making reference to "special players"; as the 6-8 special players of the 2013 draft, these can be apportioned to your Pro-Bowlers grading between 8.0-7.0. These, along with those grading between 7.0 - 6.0, normally constitute your 1st rounders averaging between 15 - 20+ total prospects depending on the strength of each annual draft class. From there each subsequent talent grouping (tier) approximates a draft round and is represented on the Steelers HDB by the placards located along its left edge: 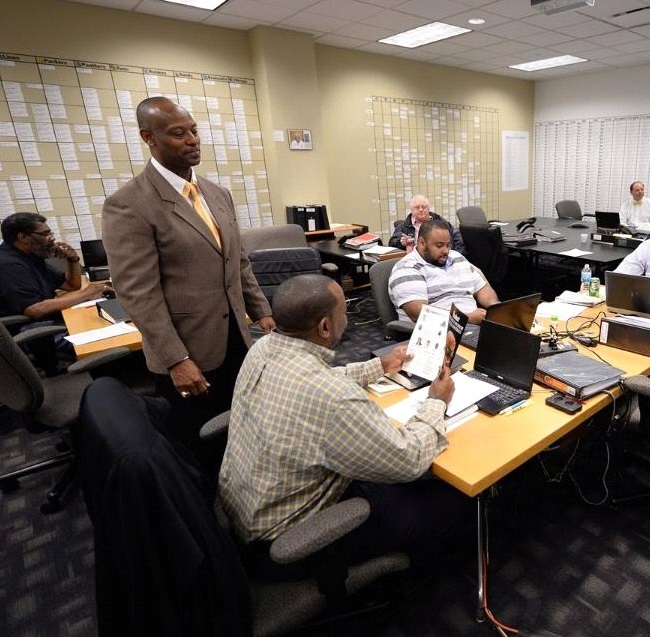 Notice the grade placards on the left edge of HDB. The top two bracket most of the 1st row. If you count the player cards contained within you get 8 total (1 QB, 1 WR, 1 TE, 2 OT, 1 CB and 2 LB), aka, the special players Colbert made mention, of which JJ is one (column 11 (LB)). Following is the remainder of round 1, approx 12 players resulting in 20 in total. After that is the next grouping (Rd 2) comprising approx 22 players contained within the grouping within rows 3 & 4. The remaining rounds follow the same methodology.

In summary, each prospect in the HDB is ranked both vertically and horizontally resulting in "tiers" or groupings of similarly-graded talent denoted by the grade placards to the left edge of the board.

Bringing it all together

Now that we have a basic understanding of their draft board we can make a detailed examination of 2015. Below are two views of Day 1. The first photo is the Day 1 board prior to the draft starting. I've annotated on the left edge the grade ranges I detailed in the prior section. For 2015 there were 9 special players (from left to right: 1 RB, 1 QB, 1 WR, 1 OT, 1 CB, 3 LB, 1 DE). We know from the way the draft unfolded and subsequent pictures RB1 - Gurley, CB1 - Trae Waynes and Bud Dupree in the range LB1-3. For more detail refer to forum threads.

Also, I've highlighted the positions which will be the subject of further discussion. (Note the relative order of S1, CB3, TE1 ranking) 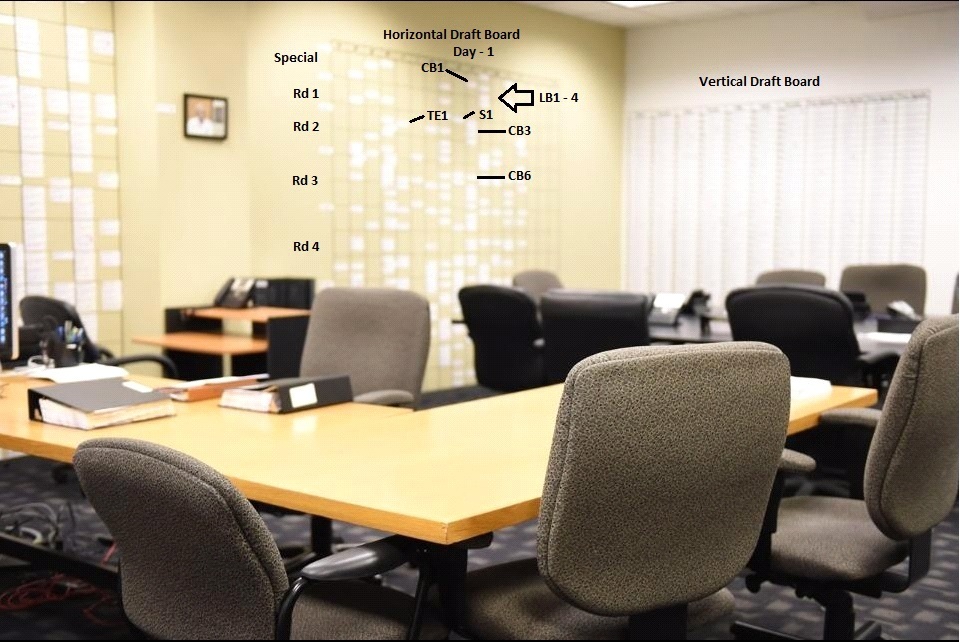 The next picture is Day 1 sometime after pick 12 but before pick 13. The top row is missing but we know this since RB2 is still on the board (Gordon pick 15) However, OT9 is missing (Flowers pick 9, OT3 (Peat pick 13) remains and DT1 is off the board (Shelton pick 12). Notice the Red dot next to CB2 (Peters/Jones). Also, this picture is the one immediately following the picture on Steelers.com showing the Draft Day Tracker with Shelton penciled in at pick 12. Finally we know OT3 turns out to be Peat from another follow-on picture. 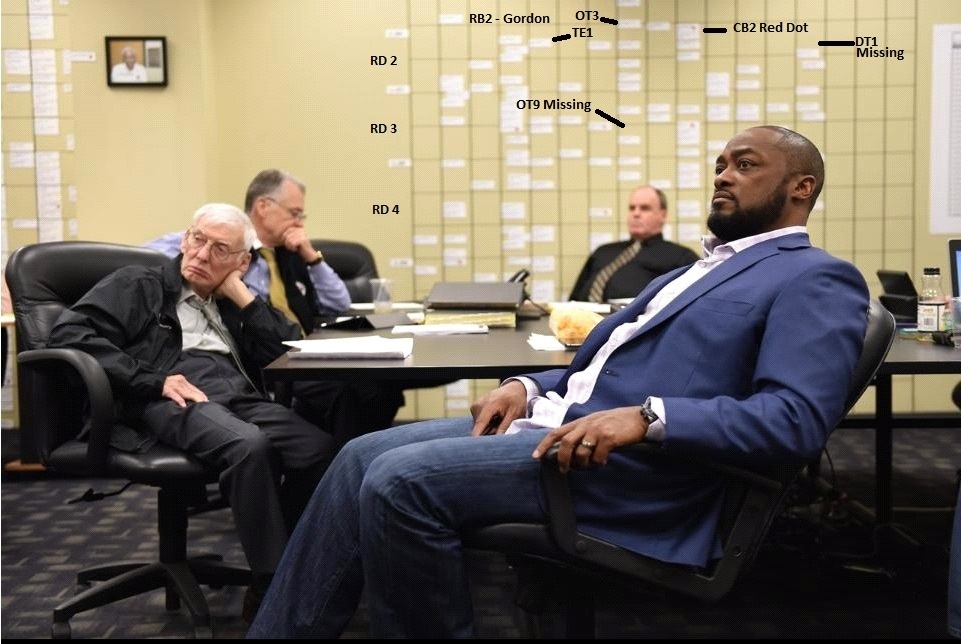 The following picture is of the Steelers Day 2 draft board. Note the relative positioning of S1, CB3, and TE1 remain the same as Day 1 with what looks to be a single LB placard (Gregory) rated higher than all. 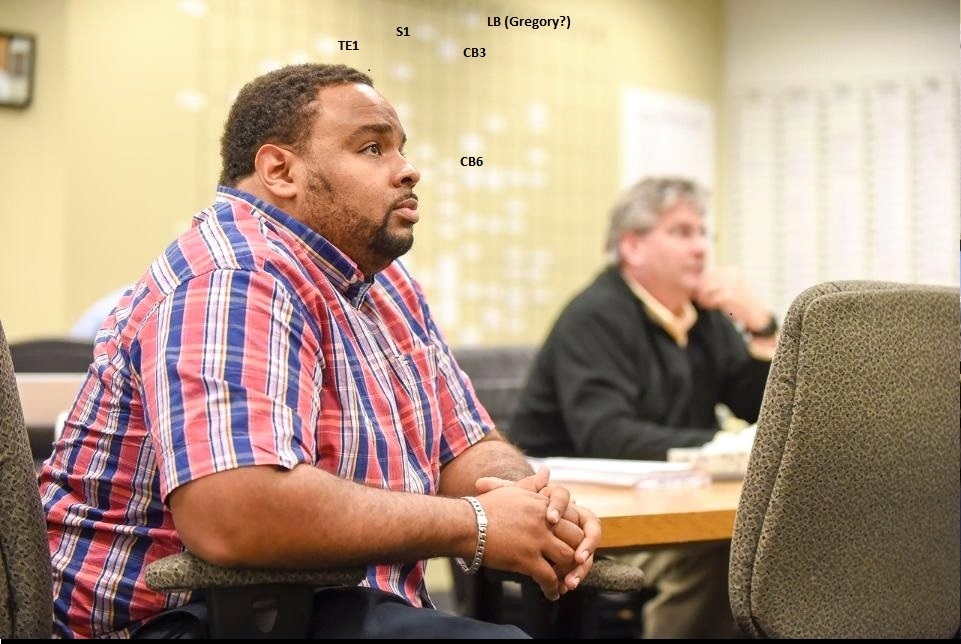 The board seemingly supports all the speculation being reported prior and during Day 2 of the draft. Whether you want to believe Landon Collins was the subject of early Day 2 trade-up rumors or that Maxx Williams was the player they coveted, both rank very high on the board. We also know that one corner (CB3) from the Day 1 cluster survived, but was that player Senquez Golson or someone like Eric Rowe, etc.?

If you believe Golson was CB3, and the only Day 2 CB target that Colbert mentioned, then that means the team bucked the NFL trend of not drafting sub-5.9' corners in Rd 2 (only 4 in 10 years) as well as the team never drafting that profile of corner in the first 2 rounds.

Conversely, if you believe the team had other targets early but turned to Golson after a failed trade attempt with the Rams resulted in both Collins and Rowe being drafted shortly after; then that would mean the team reached for him as CB6.

However, in the end does it really matter since the team pulled an '07 draft redux with double-dipping at corner to select both Golson and Grant? As ColbertsAssistant (a poster and draft expert at SCI.com) mentioned during the draft chat, "Somehow in the end selecting both fixes everything". And for the lack of anything better that statement pretty much sums up how I feel as well. Although, I'll always wish there would've been a way to add Maxx Williams to the Steelers side of the draft ledger.