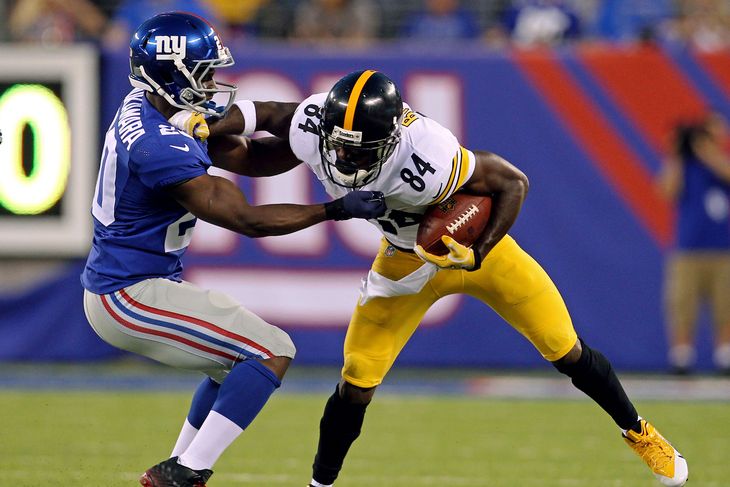 The draft is over. OTA's are around the corner. Training camp is months away, while the first official kickoff seems light-years away. I am sick of hearing about Brady. I have no interest for football in shorts. So this is the time of year I start looking into fantasy football prospects. It is better than living with the lulls of the off-season , better known as "watching paint dry".

This can be a great time to start assembling a cast of players to form your championship team. Your bread and butter is going to be a good core of running backs and wide receivers. A high scoring quarterback can't hurt your chances either. I have to decided to break down my top 5 prospects at these 3 positions for the upcoming season. You may have different rankings, but I believe these are the players that can bring you that beautiful championship with all of its bragging rights.

This may seem like a no-brainer, but there is a lot to like about Rodgers in 2015. He threw a massive 38 TD's last year against a mere 5 INT. He also played a full 16 games after missing almost half a season in 2013. His receiving corp returns intact with the re-signing of Randall Cobb. They also have 3rd round WR Ty Montgomery to add to the mix as well. Look for Rogers to be the top fantasy scorer once again.

Luck finished second to Rogers last year by a mere 2.4 points. Like Rodgers, his receiving corp is looking pretty explosive on paper. They still have T.Y. Hilton and a dynamic pair of tight ends in Coby Fleener and Dwayne Allen. Andre Johnson was brought in to fill the Reggie Wayne roll, and they added a brand new toy in Phillip Dorsett via their 1st draft pick this year. Not to mention, they have attained the services of Frank Gore, who will command more attention than Trent Richardson and Dan Herron.

Getting older? Sure. Slowing down? Maybe. Fantasy relevant? You better believe it! 4700 passing yards and 39 TD's. Peyton just seems to have the Midas touch. He instantly makes any offense one to be reckoned with. Demaryius Thomas will definitely be a top 5 receiver with Peyton tossing the pigskin to him. Ex-Steeler Emmanuel Sanders appears to be a great compliment receiver as well. Losing Julius Thomas hurts a bit, but I think Peyton can turn any Tight End into a superstar. Not worried.

This is where things get a bit dicey. After the top 3 quarterbacks, you have to weigh your options a bit. I see Brees at No. 4 even though the Saints traded away stud TE Jimmy Graham. He still has Brandon Cooks and Marques Colston as reliable targets. The Saints also acquired C.J. Spiller for his skills as a pass-catcher out of the backfield. You could make an argument to drop Brees much lower because of the Graham trade, but his passing skills didn't leave with Graham. It just means more targets for Cooks and Co.

Seriously, no bias here. Ben deserves the No. 5 spot over the likes of Brady, Eli, and Romo. The Steelers will field one of the most dynamic receiver corps in recent memory, headed by the top receiver in the league, Antonio Brown. Add in deep threats Martavis Bryant, newly acquired Sammie Coates, a reliable Tight End in Heath Miller, and Le'veon Bell catching passes out of the backfield. Bell's suspension will only lead to Ben throwing the ball more to start the season. It is hard not to like what Roethlisberger could bring to your team this year. He finished in the top 5 in fantasy QB's last year and he could possibly push into the top 3 this year.

Pre-draft rankings always have him anywhere in the range of 6-8 best rusher. However he has been consistently producing top 4 numbers for the last 4 years. With the other question marks at running back this year, I put my money on Lynch finishing in the top 2 for RB's. The addition of Graham as a threat in the red-zone should only open up more lanes for Beast Mode. The only thing that could slow down Lynch are his back issues, which caused him to miss a little bit of time in 2014. Prepare to have Skittles raining down again this season.

After missing the majority of the 2014 season after being suspended, the Peterson seems poised to make his return to the Vikings as their workhorse back. Asiata and McKinnon didn't do much to make Vikings fans forget about Peterson in his absence. He looks to be hungry and could produce decent stats with the Vikings revamped offense. The addition of Mike Wallace should help keep defenses honest as well. Sure, Peterson is a 30 year old running back who has been out of football for almost a whole season, but I still expect him to get around 25 carries a game and believe me, he has something to prove.

If not for his 3 game suspension, you could make an argument for Bell as the No. 1 fantasy back this year. I still expect him to put up some big numbers despite missing a few games. Bell is truly a workhorse back and is superb as a pass catcher to boot. I don't expect the arrival of DeAngelo Williams to hamper Bell's stats. Williams is simply there to give Bell a breather or as insurance in case of injury. Pittsburgh's prolific passing attack will only open lanes for Bell to work his magic and did I mention Bell's ability to catch passes as well? Could he claim the rushing title while missing 3 games? I wouldn't put it past him.

Always a threat to take it to the house, Charles has a good chance to put up some stellar numbers, if he stays healthy. Injuries plagued Charles to start the season last year and that could keep a few owners at bay. Kansas City isn't exactly a passing juggernaut, so defenses will key in on Charles. He will be good for a few monster games however and with a decent playoff schedule, you can afford to take a chance on Charles.

I owned Lacy in a couple of leagues last year. While I loathed him to begin the year, he really turned it on in the second half of the season. I see him carrying that momentum with him into 2015. With Aaron Rodgers at the helm of a strong passing attack, defenses will have a lot to answer for. Lacy will be a safe bet to finish with over 1000 yds rushing, but the strength of the Green Bay team is it's passing offense. Although, Lacy is no slouch in the receiving department, having attained over 400 yds to go with 4 TD last year. I expect similar numbers this year.

That's right. I have three Steelers finishing in the top 5 players at their respective positions this year. Returning as the top receiver in the league, Antonio Brown looks to take the league by storm once again. Brown is a PPR machine and could be a triple crown receiver in 2015. Brown could make a strong start considering the Steelers will probably throw a bit more in Bell's absence. While Pittsburgh has some other weapons at receiver, Brown is head and shoulders above the rest and Ben's favorite target. After amassing almost 1700 yds receiving last year, Brown is a lock to achieve similar numbers. Roll with Antonio as your number one receiver with confidence.

Beckham finished in the top 5 receivers last year even though he only started 11 games as a rookie. That is unreal. Imagine what he will do with a full season under his belt. Sure, defenses will look to shut him down now that there is some tape on him, but I see him surpassing his totals from last year with ease. I don't see the return of Victor Cruz having any effect on Beckham's targets. Look for Beckham to have a monster year in his sophomore season.

Mark down Thomas as another player who started out slow last season and finished strong. Amassing over 1600 yds last year, another season over 1500 yds isn't out of the picture. In fact, with the departure of the other Thomas (Julius), there should be more targets to go around. With Peyton returning for another year, Demaryius has a strong chance to produce once again. He has also finished as a top 5 receiver the last 3 years.

Last year's No. 2 fantasy receiver looks to add on another stellar campaign in 2015. Nelson had over 1500 yds receiving and there is no reason to think he will achieve otherwise in 2015. The Packers re-signed Randall Cobb, but that will only keep defenses from keying in on Nelson. There are virtually no other targets beyond Nelson and Cobb in the Packers offense, so both receivers should produce once again. A clear-cut WR 1, have no fear using a top pick in acquiring Nelson for your team.

The departure of DeMarco Murray could take a toll on Dallas' offense as a whole. Without a workhorse back to rely on, Dallas will move to a RBBC approach. With no real home-run hitter out of the backfield, Dallas will be looking to throw the ball more in 2015. Bryant should reap the benefits as the leader of their receiving corps. After totaling 16 TD last year, I think he could see around the same amount being their main offensive weapon. He could however be feast or famine being the player defenses will key on.