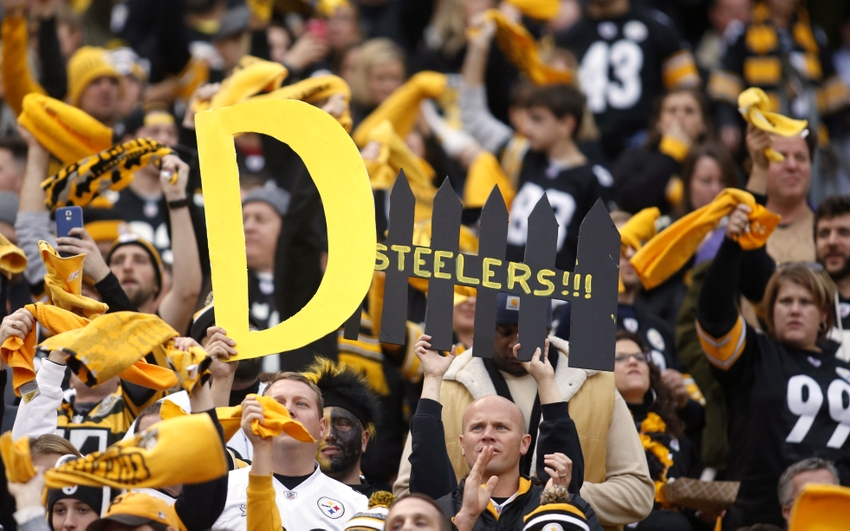 We have a long wait on our hands. It won't be until late July until we get to see the Steelers in pads. That is two whole months from now. Until then we're left with a lot of speculation on how the 2015 Steelers will fair this year. After talking to some Ravens fans over at Baltimore Beatdown, I began to think - do we over rate our own players? It seems natural enough, we as fans want to believe that every player will pan out, thus making our team one of the best in the league. But that doesn't always happen. The Steelers often do a real good job to make sure that when they pick a player in the draft, at least half of them turn out to be starter level guys and one or two of them will be stars. That is what holds the Steelers' future in the balance. Whether or not these last drafts will produce a couple of starters and at least one or two stars. These unknowns can make or break the future of the Steelers.

I believe that Jarvis Jones will be the biggest determining factor this year on how good the Steelers will be. The third year player will have to bounce back from an injury plagued sophomore season where he flashed some potential at the beginning of the season. If Jarvis can be a guy who gets double digit sacks in a season then I'd feel real good about the Steelers chances of making the Super Bowl this year. One of the biggest issues people have with this team is the uncertainty of the front seven. As we found out last year in the playoffs, the game is won in the trenches. You need to dominate one side of the ball to win games. The Ravens got to our QB and didn't allow us to get to theirs. It doesn't matter how good your offense is in the playoffs as history has shown, defense wins championships. You always need a good defense. With the offense we have we don't need to be a dominating defense but we need to be a very good defense. For that to happen any time soon, Jarvis can't bust. The Steelers need him to be a pass rushing force that can help the defense get off the field on third downs. If this doesn't happen then look for the Steelers to have a good regular season and early exit in the playoffs like they did last year.

Outside of that flash against Carolina there isn't much reason to believe Jarvis will become what we picked him to be. Lets not mention that Carolina offensive line was one of the worst lines in the NFL last year; so much so they've turned to Micheal Oher to be an upgrade..... yes the same Micheal Oher Harrison used as a rag doll when he was in Baltimore. So I see this as a toss up with a slight edge towards the positive, Jarvis could show that the Carolina game was no fluke or he'll revert back to how he has played the majority of his career. Lets hope its the former.

Ryan Shazier didn't have a break out year last year. But thats understandable, I believe the Steelers are drafting not for immediate success but long term success. That's a big gamble and we'll see if it pays off. Shazier has the skillset to be the next Troy of the defense. The wildcard that flies everywhere making splash plays after splash plays. This team needs splash plays, they need a linebacker to fly across the middle of the field to make an interception, they need his athleticism to get to the quarterback quickly causing fumbles and they need his ability to cover tight ends up the seam. Shazier needs to at least come close to fulfilling what was envisioned for him. We played Troy up the line so much it just makes sense to actually use a linebacker in the Troy role so you don't have a Safety playing so close to the line. We don't have a special player at Safety like we had with Troy that allowed us to risk having one so close to the line of scrimmage. If Shazier can do that, he'll give the defense the splash plays it needs to support the offense.

The only reason why this isn't higher is the threat of injury. Shazier just seems like a guy who might be plagued with injuries his entire career. I hope that is wrong but a guy his size at linebacker will take on a lot of wear. Hopefully though with him getting a better feel for the game he can also get a feel for how to keep himself away from injuries. If that happens the chance of Shazier reaching his potential goes up.

Our offense was spectacular last year. The three headed monster of Brown, Bell, and Ben really sliced through a lot of defenses. But there was something missing, something that we had before but lost through free agency. The ability to stretch the field. That is where Bryant came in, he was able to take the top off defenses and got huge chunks of yards for the offense and scored touchdowns, which is a pretty big deal. Its hard matriculating down the field 10 yards at a time. Which is what made Mike Wallace such a valuable asset when he was here. The ability to get huge chunks of yards at a time makes life easier on the offense. That's what Bryant brought to the table and with that, the offense became truly dynamic. For that to continue however, Bryant is going to have to be a more well rounded receiver. He is going to have to get better at his routes and be a threat in the intermediate passing game too. In other words become a true #2 receiver. Also he has to do a better job of using his big frame as a weapon, not only in the redzone either. If this happens and I think the offense will continue to flourish which will be much needed.

Bryant has been noted as working hard on his craft. I think having an entire off season with NFL level prep and not being burdened with learning the playbook will make Bryant a weapon at wide receiver. Having things become second nature to a guy with the skills Bryant has will make his impact tangible. I think there is a solid chance of this happening.

Some might put Allen's importance higher but we survived Allen's absence last year and I think if the pass rush gets better we can survive it again this year. But it would be great to have the good Cortez back. I don't know who that guy was last year, getting beat by double moves and missing assignments. I don't want him back. It seems Allen's problems were mental. Hopefully he is another Ike Taylor clone in the sense that after Taylor got benched he bounced back to be one of the best corners the Steelers have had in recent history. Allen has the size and speed and ability to be what Ike was back in 2008 for the Steelers. Hopefully he'll be able to catch better. If this does happen the Steelers defense can become really good. There just isn't much there to suggest it will happen.

This is a coin flip. There is just as much reason to believe Allen will be Ike 2.0 as there is to believe he will be Crezdon Butler 2.0. Not much insight here, we'll have to sit back and watch this develop.

Finally Shamarko has a really good chance to claim the starting strong safety position. There isn't much known about Thomas other than he's really fast, he's really athletic, and he's had three years to prepare for this role. The coaches have really kept Thomas under wraps over the years. He hasn't worked himself onto the field in large part because Troy wasn't going into a backup role. But even when Troy got hurt we didn't see Thomas inserted into the lineup. Normally that's not a good sign. So when Troy retired many thought the Steelers would draft a safety to at least give Thomas some young competition for the position. They didn't and that kind of mixed signals is why Thomas here at number five. Its going to be interesting to see what Thomas can become, will he be the hard hitting safety who can also cover or will he just be a fast/hard hitter.

Another coin flip. There is just no good way to know what Thomas will bring.

How good the Steelers are will depend on how these players turn out. If they all live up to their hype expect big things for the Steelers. That is, however, unlikely. What is much more realistic is that some of these players will work out and some won't. So seeing this gives us a good idea how far the Steelers have to go, especially on defense. Right now its not a given the Steelers correct their flaws and they may end up no better than they were last year. It looks like thats a very real possibility.

I left out players like Tuitt and Mike MItchell because I think they will be solid this year and their impact won't be as noticeable as potentially the five players I mentioned. In the comments below expression you're opinion on who will or won't work out or another player you believe I may have over looked that the Steelers Season will depend on whether or not they play well.

Which player will the Steelers need to play well the most this year?