Bills vs. Steelers: No Country for Old Men

The window appears to have closed...now what?

Share All sharing options for: Bills vs. Steelers: No Country for Old Men

I still don't really believe this is happening. I'm pretty sure this is just a long dream/nightmare that recurs every weekend.

You know it's really too bad they suck this year, because it appears as thought there are no good teams in the league. But hey, if everybody else is being awful this year, why not hang with the cool kids? At this melancholic stage in the season, attentions will certainly drift to the offseason, which sucks because the draft is what should make a team better for the actual games.

The Bills will be getting EJ Manuel back, so the Steelers won't be handed two defensive touchdowns like the Chiefs were. Or at least not as easily. This team is actually pretty good in some phases. They could make Pittsburgh look pretty foolish again this week, this time on the ground. Their combo of Spiller and Jackson can be downright nasty. The Bills have played in some weird games this year -- outplaying the Chiefs (everyone other than Jeff Tuel, anyway) and getting blown out by the Browns earlier in the season.

The Steelers are not good. Parts of their system look okay, but expecting big changes is fair. A bad season here and there is unavoidable, but an embarrassment like this season has been might be seen as unacceptable to the Rooney family. At the very least, Haley needs to go and the team needs to focus on adding as many helpful defensive players as possible. What they have on offense isn't good by any means, but it might be passable if they had one of those vintage, clear-cut number-one-overall defenses that we got used to over the last few years.

No Country for Old Men 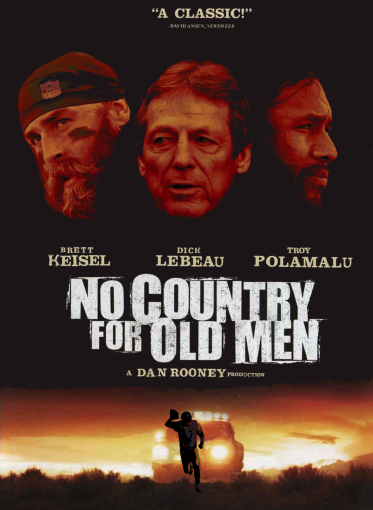 The Steelers 2013 season is like the motorized sip of a plasmapheresis machine, as it malfunctionally bankrupts a former executive of his homeless and alcoholic blood with a promise of $35 to ward off the shakes.

The Steelers 2013 season is like a Robert Downey, Jr. mugshot --- Hopefully.

The Steelers 2013 season is like that time you found $20 in your winter coat, except instead of a 20-spot it was a live wolverine.

The Steelers 2013 season is like trying to do a really sweet front-flip on a trampoline but biffing it really hard and tilting the whole thing over right into the waiting crotch of a very stimulated labrador.

Feel free to post your own Steelers 2013 similes in the comments!

At least it was a record

That asskicking was 81 years in the making. It's kind of amazing that the Steelers were able to hold out until now if you consider the NFL's shift toward offenses over the last several years. And now that we got that out of the way, here's to another 81 years of that not happening!

/// ¡WARNING! /// The rant following this GIF isn't exactly essing the NFL's dee, so if you don't like criticism of the league or you think I'm just bitching because the Steelers suck (partially true), please scroll down to the stupid Hemingway pun.

I don't know when it started, but it's being going on for a while now.

The NFL is becoming unwatchable.

I know I'm saying that partially because of the Steelers weekly presentation of their trudging 2013 shit-parade. But things are different in a lot of ways this year, because I so thoroughly expect them to lose. I don't really watch the games anymore -- I just look at it while it's happening. I let it wash over me like some kind of septic grease-tide on a beach of fiberglass insulation and Cheetodust.

And when a game is presented to you in this way, you see it outside of the competition and zealotry you're used to. It just looks like guys constantly dancing and tripping each other in between shots of a referee explaining some very boring instruction manual he found in the bathroom after demanding immediate piss from some jelly-brained freak of nature.

Sure, there are still amazing things that happen -- every once in a while -- and I'll always watch it. But it seems like the league is doing this on purpose. There's a flag on nearly every play. And when the league noticed this, what did they do? They gave the coaches flags too. More flags! They took away kickoffs but we still get to watch them launch the ball through the uprights after every score (or watch some overconfident clown take it out from 7 yards deep). Pass interference is a strategy now, not just a penalty. There's holding on every play, so they just call it randomly. You know, whatever.

Baseball is taking steps toward speeding their game up, but football seems headed in the other direction. In baseball you have to watch guys readjust their batting gloves six or seven times an at bat or do the first sequence of steps to the Lindy Hop before stepping in the box, but in football it's all yellow flags and commercial breaks. Oh, and dancing. Lots of mime-inspired dance routines.

There's a hashtag on Twitter baseball people use to describe an ump taking over a game. #UmpShow. This isn't as popular for football tweeters because if they "#RefShow"-ed every time it happened, Twitter would be out of commission on Sundays.

In regard to flopping -- with all the Arena-style offenses and the rules that promote them -- football is becoming more like soccer. Except in that game they don't stop the clock for injuries or penalties. I still like football better, but dammit if they don't try to make me hate it. The Steelers are doing their part as well, but the game seems to have changed a lot over the last several years.

"Who are they playing this week?"

For whom the Le'Veon tolls

I don't think Hemingway would care for the NFL anytime after 1970 or so.

I was really hoping to get a chance to watch Bell break out against an awful Pats defense, but unfortunately (and habitually) the Steelers were down early and they simply couldn't invest the time it takes to rely on the running game. Bell still had a pretty nice game, though. It wasn't enough for the game to be Saved by the Le'Veon, but it was close. Okay, sorry. It's a funny name and I wanted to take the fun out of all the future Bell puns for Rick Reilly. Bell might get his chance to "inspire" some of those RcNuggets if the Steelers can yield a decent line in his 3 or 4 year window -- or however long a career expectancy is for RBs now.

I've always wondered what Ryan Clark thinks about everything that ever happened. Luckily, he knows this and immediately squashes my curiosity on topics as they arise.

You tell me. I suppose it's possible Clark and Darren Woodson are right. But as a best case scenario, Bryant is not an insane TO-caliber diva, he's just an outrageous and annoyingly hyperactive teammate.

Bryant is an AWESOME receiver and I'd take him on the Steelers right now, warts and all. And it's completely possible that he has been misunderstood (on several occasions), but it still seems like he should maybe scale the act back a little, in my humble and slightly jealous opinion.

This is a real stat

The Steelers are 31st in the league against the run, besting only Jacksonville. I checked several sites to make sure. It's true. And Buffalo is just a few yards short of leading the league in rushing yards. This could get pretty bad. Probably not 55-points-bad, but pretty bad.

And this is a real sentence

Bills vs. Steelers NFL Week 10: Everything you need to know before 1 p.m. ET kickoff