Who do they really want, McCown or Glennon? How good is Gerald McCoy? Remember when Mike Evans was going to the Steelers? We dig into it all with Bucs Nation.

Bucs Nation editor Sander Philipse was goodly enough to join me in a bit of back-and-forth heading into Sunday's Buccaneers at Steelers Week 4 game. Interestingly, teams since 2004 that have lost three consecutive games and are underdogs for the fourth game are 95-69-3 against the spread. The Steelers are favored by 7.5 points. Let's see if Sander is buying any of that.

I had Tampa Bay in the NFC playoffs this year. I can't help but notice some similarities to a 2013 Steelers team that started 0-4. The Bucs sit at 0-3 due to a few key injuries, very similarly to Pittsburgh last year. They'll get a few of those players back this week, do you think this team still has a chance to compete for the postseason?

There's always a chance, but it's very big right now. The Bucs looked like an absolute disaster last Thursday, but that wasn't really indicative of how they'd played during the season until then. It hadn't been pretty, but it wasn't that bad. But to compete for the playoffs, the Bucs have a very steep hill to climb: not only are they 0-3, they've also lost two division games already. They have a lot of catching up to do. Week four is much too early to say it's impossible, but they have to fix a lot of things and go on quite a run against a very tough schedule to even compete for a wild card.

Blogger Q&A: Will the Steelers defense struggle against the Buccaneers? 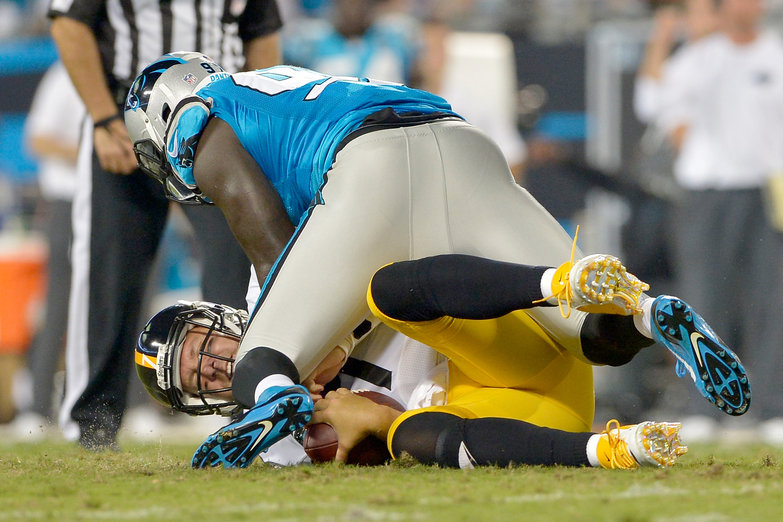 Running back Bobby Rainey played fairly well in Doug Martin's absence. Martin looks to return Sunday against Pittsburgh, do you see him just taking back his old job, or will Rainey maintain a healthy amount of carries?

Bobby Rainey has lost three fumbles in three games (which leads the NFL, incidentally). That doesn't really help his cause. Rainey will still see some carries, and he's likely to get the brunt of the work on passing downs, but Doug Martin will step right back in as the lead back. There's a chance Martin loses that role later in the season if he doesn't improve his play, and there's something to be said for the idea that he's not an ideal fit in the Bucs' zone running scheme, but it's too early for him to lose his job completely.

Bucs rookie WR Mike Evans looks like he belongs. He was put in Pittsburgh in several mock drafts this offseason until it became clear he would be a top 10 pick. With Vincent Jackson hobbled a bit, Evans seems to be emerging as a key offensive weapon. The Steelers gave up 8-115 to another big rookie receiver, Kelvin Benjamin, in Week 3. What kind of game do you see him having this week?

That's tough to say, honestly. The Bucs have run him on deeper routes, but the balls that have been thrown to him have mostly been fairly short. That's on Josh McCown, in part, but Mike Glennon hesitated to fire the ball down the field last year, too -- so I'm not sure that changes now. Evans has seen a good number of targets, but he's hardly been dominant: he's not the most polished route runner, and he mostly needs to produce based on his size and ability to make contested catches right now. If Glennon's willing to throw him the ball even when he looks covered, Evans could have a monster game. Otherwise, he'll see a few useful catches but won't have a massive impact.

If both quarterbacks are healthy, which one do Buccaneers fans want to see under center, Josh McCown or Mike Glennon?

Hah, that's a good question. A lot of fans want to see Mike Glennon under center -- in part because they think he can be a great quarterback, in part because they feel he had a very good season last year, and in part because they don't trust Josh McCown. I'm not sure I agree with those reasons: the Bucs brought in McCown because they want to win now, and I do think he's their best shot at doing so -- provided he stops throwing idiotic interceptions. I also feel like Glennon's rookie season has been largely overrated, but there were certainly flashes of quality play there. If the season's out of reach, you may as well hand him the ball to see what he can do in this system.

I think Gerald McCoy is one of the five best non-quarterback players in the NFL. Agree? Disagree? Describe his play over the last two seasons.

Gerald McCoy's dominant. He is the single best interior defensive lineman in the NFL right now, unless you want to put J.J. Watt in that category. He's essentially unstoppable as a pass-rusher, and has had a few games where he was in the backfield on almost every single dropback -- the Seattle game last year comes to mind, specifically. Yes, he's one of the very best non-quarterbacks in the NFL and he's the key player in this defense. The only reason his numbers don't look better than they already do is that he has had frightfully little help, and even played in a scheme that was largely designed for him not to make plays last year. In short: he's a terror.

Follow Sander Philipse and Bucs Nation on Twitter @Bucs_Nation and make sure to read all the Buccaneers coverage on Bucs Nation leading into Sunday's game, including their own Q&A with BTSC