Mike Adams had a gun pointed in his face during altercation

Reports indicate he was outside his truck without keys at 3 a.m. when three men - two armed, one with a gun and one with a knife - confronted him with the intention of stealing his truck. He was stabbed as a gun was pointed in his face.

Share All sharing options for: Mike Adams had a gun pointed in his face during altercation

Post-Gazette reporters Ed Bouchette, Jacob Quinn Sanders and Deborah M. Todd contributed to the growing story about the stabbing and robbery attempt of Steelers offensive linemen Mike Adams Saturday, and the latest news they've reported is confirmation the alleged assailants were armed with a knife and a gun.

Adams out 6-8 weeks after stabbing 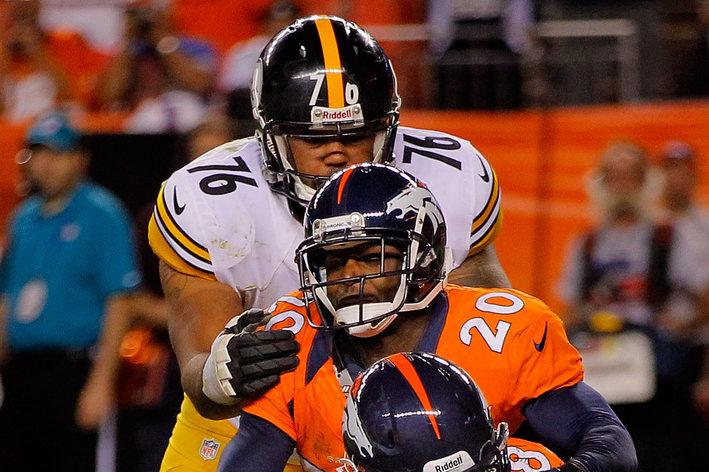 Mike Adams may be lucky to have survived a robbery, but it's another injury setback for the second-year offensive tackle, writes BTSC's Neal Coolong

They pointed the gun in Adams' face as he confronted the would-be car thieves at East Carson and 17th street - not outside his house as it had been previously reported.

Adams was outside his truck at 3 a.m., and did not have his keys - they were with the valet service of Nakama Japanese Steakhouse, the restaurant confirmed - when three men approached him. One had a gun, another had a knife. The man with the gun had it pointed at Adams' face as the one with the knife stabbed him.

The fact Adams didn't have his keys is interesting, considering his agent didn't appear to know that when he spoke with NFL.com reporter Aditi Kinkhabwala Saturday.

Adams was stabbed twice, once in the stomach and once in the forearm, before the assailants fled. Police found him at Cambod-Ican Kitchen, 1701 E. Carson Street in Pittsburgh, before he was taken to the hospital.

Fortunately for Adams, it didn't get worse, but the two questions that will come out of this in the long term are why he was outside his car without the keys in an area locals know isn't smart to be alone, and why he was there at 3 a.m.

It may not have been the smartest decision for Adams to make - only slightly more wise than his decision to allegedly chase after the three assailants after he was stabbed - but it isn't against the law to be stupid. Adams is lucky to be ok, that's the sure thing.

Follow all the latest news regarding Mike Adams on our StoryStream