Is this one going to be another nightmare? Or can the Steelers inflict a little lycanthropic carnage of their own?

Share All sharing options for: Vikings vs. Steelers: American Football in London

It's not good when your best offensive performance of the season includes 5 turnovers and a mere 23 points.

It's also not good when your team loses to the Trent Richardson-less Browns at home, predominantly at the unpracticed hands of one Brian Hoyer.

So, who's the least not good-est?

The Steelers haven't started 0-4 since 1968, so this is kind of an important game for the consistency of the franchise. It's probably a really important game for Todd Haley too, because as we all know, offensive coordinator is the only major coaching position in Pittsburgh with somewhat frequent turnover. And someone is likely to be fired if this team ends up as bad as they've looked through the first three games of the season. Only five teams have climbed out of an 0-3 hole to reach the postseason and just one team in league history has made the playoffs after an 0-4 start. In other words, it's do-or-die time. In Week 4.

The Vikings have struggled behind Christian Ponder, and things aren't likely to be better if he sits out. As former Kansas City punching bag Matt Cassell is Minnesota's No. 2. Remember the last time the Steelers faced that guy? He posted a 46.0 quarterback rating in that game. Not so good. But the Vikings also happen to have one of the best running backs ever. At age 28, Adrian Peterson already ranks 19th in career rushing touchdowns and he may pass Hall of Famers Eric Dickerson and Jerome Bettis (Class of 2014, probably) before the end of the year. The Vikings' defense also happened to be one of the league's better units last year in terms of rushing the passer. This isn't a team devoid of talent -- remember, unlike the Steelers, they made the playoffs last year.

Ben had to sling it right out of the gate against Chicago due to a huge first half deficit. But the offense actually moved the ball pretty well with Roethlisberger barking out the the calls at the line and his receivers running improv routes on what looked like mostly broken plays. The Vikes' secondary isn't nearly as good as the Bears' unit. So perhaps a fast-paced, pass-heavy attack is what the Steelers need to move the ball down the pitch at Wembley. And, if they happen to be successful, this approach may be a good way to combat the Vikings' assumed gameplan of dosing the Steeler defense with the kaleidoscopic acid trip that is Adrian Peterson. Minnesota's defense has allowed nine passing TDs this year and an average of 327 yards a game through the air.

Ben has always seemed at right home playing cowboys and indians. Much more so than he does in Haley's surly potpourri of X's, O's, and hopeshambles. Hopefully this time it doesn't take an early three-score hole to get at least some parts of the offense from Sunday night.

JARED ALLEN vs. A STACK OF TIRES 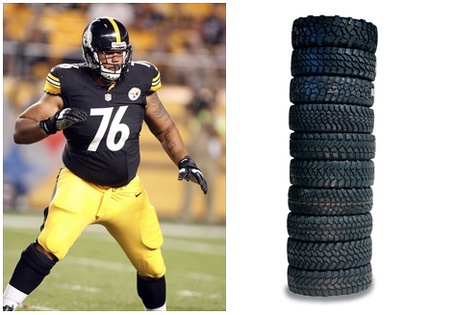 Well, close enough. Mike Adams has been about as useful as an inanimate pile of rubber. At this point, we're lucky if he even manages to get in the pass rushers' way. And now he's supposed to stop Jared Allen? Sounds like we're going to see the Jack-in-the-Box dance a lot this weekend -- unless the Steelers have an innovative plan to help Adams maintain at least a shred of pocket integrity on Ben's weak side. God knows that help isn't coming in the form of David Paulson. Maybe a combination of Adams, left guard Ramon Foster, Heath Miller, and Jonathan Dwyer (who looked pretty effective in pass protection against Chicago) can limit Allen to some extent. Though, the team's best weapon against him may be Roethlisberger himself. But he can't scramble forever. The best case scenario may be Ben holding onto the ball when Allen brings him down.

Pushing Back. Redman's biggest contribution on Sunday night was probably when he charged in from behind the play and pushed the "ball carrier" forward. It's hard to imagine Redman getting many more carries this year if Le'Veon Bell and Jonathan Dwyer are in the fold and he may already be rocking the sideline sweats this weekend. But since the NFL has never really enforced the "helping the runner" penalty and Cris Collinsworth mentioned it's apparent legalization, Redman could be desperate enough for playing time to attempt to fabricate an entirely new position. David DeCastro made his way downfield and nudged another "ball carrier" forward earlier in the game. I don't remember ever seeing this former penalty in my lifetime. Collinsworth certainly has more information at his fingertips than the average internet troll, but I couldn't find any evidence of this rule change in my exhaustive 1 and-a-half minute search. Needless to say, Redman should probably just try to stop playing his actual position so poorly.

FITBA ON THE TELLY

Prepare yourself for numerous Big Ben puns and other intensely amusing broadcast banter. Wembley is a quite beautiful stadium, and it might be interesting to see how the Brits play host to the Steelers. But it's probably a good idea to make sure your mute button is working, just to be on the safe side.

No matter who starts the game as the Vikings' quarterback, Pittsburgh will be looking to slow down No. 28. They'll likely try to mob the box and dare Cassel (or Ponder) to go to the air. While it's not a given that this strategy will work -- plenty of teams have stacked the box and lost to Peterson in the past -- it's the Steelers best bet at stifling Minny's attack. But the secondary can't take the week off by any means. The Bears clearly watched the tape on Ike Taylor and were pretty successful in exploiting the cushion they saw him give A.J. Green the week before. Taylor's bend-don't-break strategy can be effective against elite wideouts, but he'll need to adapt to the lesser talent he'll be facing this week. On third and <10 to go, the corners will have to be on top of their game, as usual. But giving Peterson multiple chances on a drive to run on 1st and 2nd down is a good way to end up at 0-4.

After giving up 28 points -- mostly with their backs against the wall -- the Steelers defense may be a unit on the hunt for a little redemption. A strong performance going into the bye week may be exactly what they need to lead the team back to respectability.

LEARNING FROM THE BEARS

This year's Steelers team should probably emulate the Bears in a few ways. Definitely not in having a chinless sadboy behind center, but it would be nice to have something that resembles an NFL offense. And the turnovers. Dear good, sweet God! If the Steelers could get turnovers like the Bears did last weekend, the offense wouldn't really matter. It might even look kind of good.

But of course, turnovers aren't yet going to come just because we'd like them to. What the Steelers can really put to use is the footage of their mistakes. Or should I say acreage? See what I did there? I made a joke using the imperial system of measurement while simultaneously commenting on the large number of videotaped miscues from the awful football game I was referencing as well.........Seriously though, going over that film should be pretty illuminating. Especially for Willie Gay, as he watches himself trying to strip the fully tucked away football from Matt Forte for a solid 20 yards. It may be hard for him to pay attention during the first few viewings, as he'll probably be viewing the play on a loop as Mike Tomlin sprays him in the face ceaselessly with a water hose. The filmroom may also be a good place for the Steelers to pick up on how the Bears have beaten Minnesota in 7 out of their last 8 games. It should be about an 11 hour flight to London, so everyone should also get to catch the NFL version of the in-flight movie. Or at least we can hope they do.

I hate to say it, but this may be one of the more notable games in determining the order of the top 10 in next April's draft. That being said, the Steelers have several seemingly winnable games coming up on the schedule. So, a 2013 transformation isn't completely out of the question.

If the Steelers can keep Peterson from controlling the game, they should have a good chance at bringing home a W.

Steelers vs. Vikings Week 4 2013: Everything you need to know