With the star wide receiver set to potentially become a free agent, is it possible Cardinals wide receiver Larry Fitzgerald finishes his career in the city in which it started.

Share All sharing options for: NFL salary cap: Larry Fitzgerald may end up cut by Cardinals

Fans of the University of Pittsburgh have a stark, definitive opinion of the guy they think should've won the 2003 Heisman Trophy.

In fact, soon after Larry Fitzgerald finished re-writing the record books at Pitt, he became one of the best receivers in the NFL.  If it wasn't for a spectacular Ben Roethlisberger-Santonio Holmes throw-and-catch in Super Bowl XLIII, Fitzgerald very well could've gone from a Pittsburgh folk hero to the ultimate villain, as his tremendous performance nearly allowed the Cardinals to emerge victorious.

That all seems long ago, at this point.  Fitzgerald has suffered a statistical decline as a result of a toxic mixture of aging, injuries, and most destructively, ineffective quarterback play.  Worst of all, Fitzgerald carries a cap hit of nearly $23 million next season, a number the Cardinals will absolutely have to reduce if they have any chance of retaining Fitzgerald.

The 2015 edition of Larry Fitzgerald is not worth a $23 million cap hit.  The Cardinals know this, and the emergence of both John Brown and Michael Floyd allows them some leverage if they opt to cut ties with Fitzgerald. 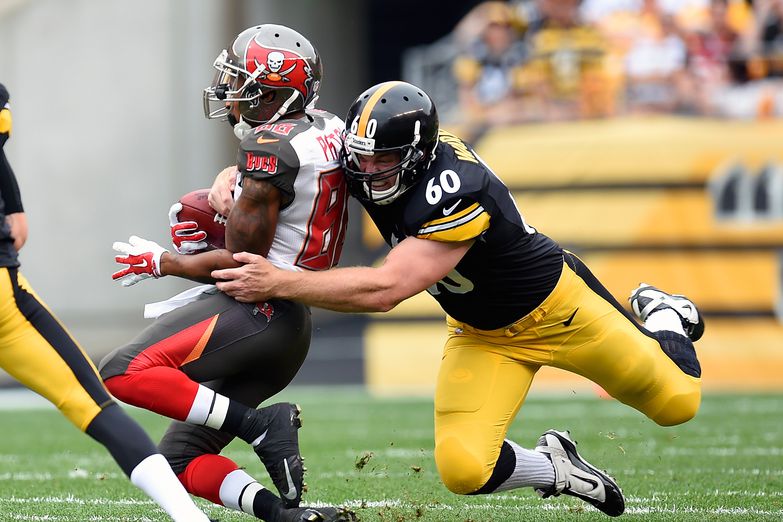 All the news and rumors surrounding the Steelers' free agents and those around the NFL.

Interestingly, it's been suggested the Steelers chase after the former Steel City hero, according to Robert Martin of the Sun Times Network. The rationale makes sense; contending teams will surely at least audition the former All-Pro to gauge what he has left in the tank, and Fitzgerald is likely to give a bit of a discount to a team hoping to acquire his services in the hopes of winning a Super Bowl ring.  Fitzgerald will turn 32 a week before the opening slate of games next season, which suggests his window is closing.  Pittsburgh is clearly a contender, and with Fitzgerald's past success in Pittsburgh, albeit at the amateur level, could the circumstances dictate a marriage between Fitzgerald and the Steelers?

While Fitzgerald will likely play for a discount, and he should, he has also cemented himself as arguably the second best receiver of the last decade, which still keeps his asking price relatively high.  The Steelers are seriously considering letting their best outside linebacker walk into free agency, so it's insane to think they would shell out money for an aging player when they already have an extremely talented wide receiving corps, headlined by the top player in the league at that position.

Even Fitzgerald's age shouldn't be enough to turn teams off, as Randy Moss was traded to the Patriots at age 30, only to put up three consecutive seasons of at least 1,100 yards and 10 touchdowns, one of which he broke Jerry Rice's record of 23.  Fitzgerald was pedestrian the last few seasons, but teaming up with Tom Brady or Andrew Luck (two teams who could realistically land Fitzgerald) could potentially see him return to form, another factor which could drive up his price. Given these circumstances, it's not crazy to think Fitzgerald could command a $8-10 million salary, even if only for a year.

The Steelers simply don't have the capital for a player who would probably be no higher than second, even third on the depth chart.

While the idea of Fitzgerald returning to his old stomping grounds at Heinz Field is certainly a romantic notion, the team has other needs which need addressed, and the closest Fitzgerald will likely ever come to Heinz Field is as a member of a visiting team.