Ravens vs. Steelers: The NFL's Most Righteous Rivalry

The most bone-jarring, internal organ-bruising rivalry in sports will grace us again this weekend. Steelers versus Ravens is the very embodiment of what football should be.

Share All sharing options for: Ravens vs. Steelers: The NFL's Most Righteous Rivalry

The Steelers have lost three of their last four against the Ravens dating back to the 35-7 Baltimore win in Week One of the 2011 season. Pittsburgh finished 12-4 that year, and if they're going to do that this season, they'll have to go undefeated for the rest of the regular season...only one way to start: Beat Baltimore.

The Ravens have played three tightly contested games in a row. They dropped two of those games to Green Bay and Buffalo, but it's premature to say they have developed a pattern. For example, Joe Flacco threw 5 picks in Buffalo. No matter what you think of the guy (i.e. he's a delusional jackass), he doesn't do that very often. Basic probability sides with the Ravens in their next close one, but that's only part of the equation that decides football games. Chance isn't issued a helmet and shoulder pads...at least not on either of these teams. Baltimore has a lot of similarities with Pittsburgh. They both have trouble running the ball, their offensive lines have struggled, and both team's bread and butter -- their defense -- has been embarrassed in a game this season. But to be fair to Baltimore (why the hell am I doing that?), their "embarrassment" came at the hands of Peyton Manning and his traveling freak show of offensive revelry.

Pittsburgh, on the other hand, has only begun to show signs of life at this point in the season. They handed out a "good, old-fashioned Cowher blowout" to the Jets last Sunday, but prior to that performance, they've been underwhelming, to say the very least. They'll likely need some semblance of a running game to get their offense going in this game, and that won't be easy against the Ravens 9th ranked rush defense. And how long will it be until one of the offense's many screen passes turns into 6 points the other way? There was a close call in the first half last week when Roethlisberger quickly threw to his right and the ball ricocheted off of tight end Heath Miller's helmet. They deserve some credit for being inventive with these kinds of plays to counteract their awful running game, but opponents learn quickly in the NFL, and it's safe to say the Ravens have a pretty thorough scouting report on the Steelers by now.

With Jarvis Jones' status officially questionable, Jason Worilds is expected to start this week. And there isn't a much better matchup for him to get his chance. Worilds was benched in favor of the Steelers first-round pick earlier in the season, but he showed flashes of why the Steelers picked him in the second-round of the draft three years ago against the Jets -- recording his first sack of the season and six tackles. He can drastically improve his stock for next year's free agent market with a solid performance in Jones' absence. With LaMarr Woodley locked up and Jones under team control for the foreseeable future, Worilds may be a luxury the cash-strapped Steelers can't afford.

The Steelers can come within a game of the Ravens and tie them in the divisional standings with a win tomorrow. Sounds crazy after a start that seemed certain to bury Pittsburgh in the AFC North bedrock for good, doesn't it? The standings haven't changed since the beginning of the month (hence the regurgitated graphic)...but it's about to. In what will be a common theme for the rest of the season, this is the Steelers biggest game of 2013. If they win, they can put themselves in a position to contend in the North. If they lose, the season is all but over.

Troy Polamalu channeled his inner mountain goat last week when he destroyed Stephen Hill as he caught a hanging pass from quarterback Geno Smith. He said wanted to set a meaner tone for the defense, and he did. Emphatically. Here's to hoping I get more texts like this tomorrow: 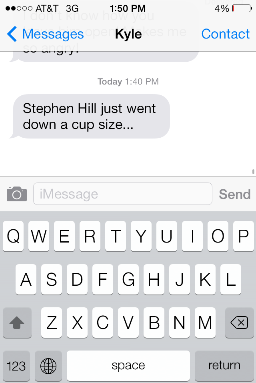 Yes, he did, Kyle. AND I got an entire 8-word text message and still had 4% battery power. Thanks, Apple.

Wow. What a perfect hit. Bad throw. Great catch. Perfect hit. That's how you crush the God from out of someone and keep your game check. And who better to show us than Polamalu?

HATE, in a good way

This rivalry has got to be up there with Bears-Packers by now, and Alabama-Auburn for that matter, at least by NFL standards. As Steelers fans, we hate the Ravens -- with a feral, wide-eyed rabidity that can only be slightly calmed by victory, and even then, it rages on.

These games are always fun to watch...well almost always. Pittsburgh and Baltimore don't have flashy, gimmick-oriented offenses (most of the time), they're both consistently among the most prominent defenses in the league, and when they get together, it's like a window into the past in some ways. To the days before quarterbacks were treated like royalty and the only way a player would leave the field was on a stretcher. These are always the biggest regular season games of the year -- and when they meet in the playoffs, it's like being softly serenaded while Steve Sabol gondoliers you down the Allegheny River.

The Ravens-Steelers hatred is alive and well. But it's all within the confines of spectatorship. I'd like to think most fans can remain level-headed when it comes to separating human lives from a game. And I honestly think most do. They may not admit it, but it seems like most folks are reasonable enough not to wish actual harm on their rival's players -- but the on-field stuff, like Polamalu hit on Stephen Hill, is fair game, I think. There's a fine line between maniacal sadism and good-natured competitiveness. Sometimes it takes a little focus. For example, I don't like John Harbaugh. At all. His personality is off-putting to me and I don't care for the way he coaches his team. But that doesn't mean I want him to, say, lose a finger in his lawnmower or something. But it appears as though I have thought about it enough to dream up that scenario, so maybe I don't know what I'm talking about.

The Ravens offense has a long-ball strategy that Pittsburgh has fallen victim to in the past. Sometimes they connect on electrifying highlight-reel plays, but a lot of the time they're targeting the NFL's pass-friendly rulebook in an effort to traverse large chunks of yardage by way of little yellow sandbags. It worked like a charm against the Dolphins, arguably leading a game-tying touchdown in the third.

Baltimore ended up winning by a field goal. They got a few other calls in the game that helped them down the field, but nothing like the 55 yards they "gained" on this drive in Week Five. I'm not saying the plays weren't legitimate or that Baltimore is gaining an unfair advantage in any way. It's a strategy. And it works.

The Steelers will need to be careful down the sidelines tomorrow if they hope to avoid losing dozens upon dozens of yards to penalty. Those calls can also be incredibly deflating in situations where the defense is otherwise is on a roll. A great way to defend against this technique is to get to the QB -- something that the Steelers are surely hoping to accomplish against a line that has allowed 19 sacks in 6 games (the 4th most in the NFL).

I may not have many good reasons to pick Pittsburgh in this game, but I'm doing it anyway, because I couldn't look myself in the mirror otherwise. The hope is that the defense settled into a sustainable groove against the Jets and that the offense can use their performance in the Meadowlands as a launching pad for the remainder of the season.

At the very least, I'm expecting a close game considering these teams' superficial similarities, with the Steelers edging the Ravens and keeping their season afloat amongst the hometown clamor and hysteria in Heinz.

Ravens vs. Steelers Week 7: Everything you need to know