The Steelers are coming off of back-to-back 8-8 campaigns. While there are plenty reasons for this recent run of mediocrity, the lack of ability to apply pressure to the QB has been a major factor. The Steelers have looked to change this disturbing trend with an infusion of youth and speed on defense. Steelers Film Room takes a look at how that speed can be utilized

(Originally posted as part of the 2014 Renegade. Running it again - nc)

If there has been a theme to Steelers Film Room, it has centered around the need for speed.  Both offensively and defensively, the Steelers have had a disturbing trend lately of NOT making big plays.  As Steelers fans, we have become accustomed to watching the Steelers grind out victories in the 4th quarter.

I always point to a particular football game that, I think, illustrates this point well.  The December 2012 game between the Steelers and Bengals at Heinz Field.  The Bengals won 13-10 in a grind it out football game.  Afterwards, it was apparent that the Steelers were not going to make the playoffs.  However, it was also apparent that the Bengals were not going to do anything in the playoffs.  You simply cannot consistently grind out victories in the NFL.

What creates big plays? Simple, speed.  One of the oldest maxims in sports is that a good big guy beats a good little buy.  That is true ONLY if the little guy is not demonstrably faster than the big guy.  Look at what has happened in boxing over the last 10 years.  I'm not sure if Mike Tomlin and Kevin Colbert are boxing fans, but it is plainly obvious that they have made a concerted effort to infuse this team with more speed.  Football is a game of inches, and it is speed that can be the difference between a sack-fumble, and a completed pass on 3rd down.

Look for the Steelers to make more plays in 2014 with a staple of Dick Lebeau's playbook: the zone blitz.  Here is an example of a blitz that just about every team in college and the NFL runs: 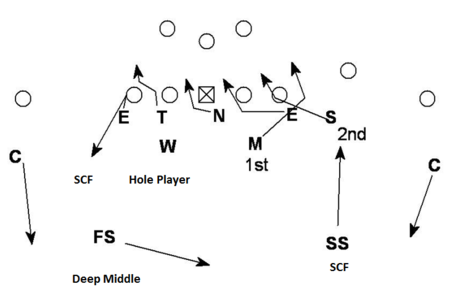 The basic fire zone blitz involves over loading the offense to one side, and dropping a player to play zone on the other side.  This is a basic overload blitz with cover 3 being played in the secondary.  The blitz features what is referred to as a "long stick" by the defensive end.  It is called a long stick because the defender has to cover two gaps,as opposed to only slanting one gap over.  Then, two rushers (whatever combination you want) blitz off of that same edge.

In the Secondary, you have two Seam-Curl_Flat (SCF) players, a hole player, and a middle of the field safety.  The SCF players want to initially play the seam to protect the middle of the field safety against 4 verticals.  They will carry those players if they run vertical route.  They will also stay high on the curl and react to the flat.  If the offense ran something like 4 verticals, or all curls, the coverage would look like man.  Only if the two inside receivers ran across the formation would you recognize the coverage as zone. 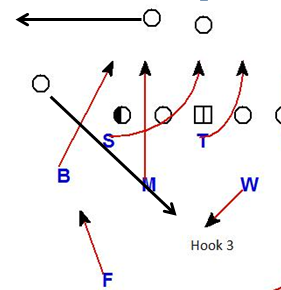 It is pretty obvious how the speed of Ryan Shazier can be an asset for the Steelers both in blitzing and in playing the the #3 receiver.  The ability to close windows for the QB can cause that second of hesitation that leads to a sack.  Just as important, however, could be the presence of Stephon Tuitt running the long stick.  As we all know, immediate pressure up the middle is kryptonite to any QB.  This clip here, of a classic fire zone blitz, is a perfect example:

There is only one throw for Locker to make, a deep out to Nate Washington.  This is an example of the inexperience of Shamarko Thomas.  It is 3rd and 10.  There is no reason for him to react to the out cut.  He should expand his zone and get under the deep out.

This is also a great example the front end of the defense not helping the back end.  Jake Locker is able to step into his throw and complete a deep out, from the opposite hash, in the direction the Steelers are blitzing.  That throw should never happen.  But look at what happens to Brett Keisel on the long stick.  First, he has to give away where he is going.  That is a clear sign to me that he knows that he can't cover the two gaps fast enough; thus, he has to give away the stunt.  Second, he creates no explosion with his blitz.  The guard is able to pass him off and pick up the linebacker.  That can't happen.  Locker has a clean pocket and is able to deliver the throw.

This is a great example of what every good coach knows: it is not the blitz, but the blitzers.  Keisel cannot provide any inside push and the blitz is ineffective as a result.

As was mentioned, Shazier is going to be very effective in multiple roles with the fire zone blitz.  And, that is the strength of the defense.  You don't teach position, you teach roles.  You teach everyone what the SCF player does and what the Hole player does.  Then, you can plug whatever player you need into those roles.  This allows more athletes to get on the field.  Look for the Steelers to expand on their 2 defensive linemen package.  Also, look for multiple linebacker groups on the field at the same time.  Guys like Terrence Garvin, Sean Spence, Shazier, Jarvis Jones, etc., can play the SCF player, the Hole player, or be the person blitzing.  That leads to looks like the one you see below:

The goal of a defensive coordinator is to make the offense feel as if there are 15 guys playing defense.  The Steelers have the speed to accomplish that.  And, here is what that looks like:

Speed creates versatility.  Here is where I really expect Mike Mitchell to be a huge asset.  Mitchell played multiple roles for the Carolina Panthers.  His ability to blitz, play deep, and play in underneath zones is something the Steelers did not have with Ryan Clark.  Mitchell can also play the run very well, so his alignment does not give anything away pre-snap.

The Steelers will have athletes at all three levels of their defense.  This entire article has not yet mentioned what could be the most disruptive force to opposing QB's this year: Cameron Heyward .  Look for the Steelers to find creative ways to utilize the fastest this defense has been for quite some time.

Check out the rest of The Renegade, BTSC's comprehensive season preview issue