Steelers defensive line coach John Mitchell is one of the Pittsburgh's best kept secrets. His coaching style is methodical, meticulous and requires patience. The question still must be asked - can Mitchell change his ways fast enough to fill a glaring void at defensive end?

Share All sharing options for: Steelers defensive line coach John Mitchell faced with biggest training camp in over a decade

...After 58 minute fever-pitch, back and forth battle, Bill Cowher's Pittsburgh Steelers maintain a tenuous 24-17 grasp on victory over Marty Schottenhiemer and Joe Montana's Chiefs as they prepare to punt.

Steelers cast-off Keith Cash, whom Cowher cut a year earlier, blocks Mark Royals' punt. The Chin explodes, upbraiding Royals on the sideline. Kansas City takes over at the Steelers 9, ties the game and then wins it in overtime.

Those were Cowher's first coaching changes. But despite opening his tenure as head coach with back-to-back playoff appearance, it was time for renewal. And ironically, the decisions he made then set the stage for the Steelers most important renewal story of training camp, if not the entire season....

How, you ask, could decisions Bill Cowher made 20 years ago, impact the 2014 Steelers?

The answer lies in his choice of replacements. Bobby April came on to coach special teams and Chan Gailey arrived to coach wide receivers, and both played their own storied, if isolated, roles in Steelers history.

But Cowher also replaced steel curtain veteran Furness with Johnny Mitchell, and it is Johnny Mitchell stands at the center of one of the most important challenges facing the Steelers today.

With 20 years of seniority, Mitchell is the Steelers longest serving current assistant coach and one of the longest, if not the longest, tenured assistants in the NFL. That's an exceptional run in a profession where the job description is "You're hired to be fired."

Make no mistake about it. Mitchell has earned that mark on merit.

Having a defensive line coach with such an accomplished 20 year track record is comforting given the Steelers needs at defense.

Explained simply, the secret of Dick LeBeau's 3-4 zone blitz lies in creating favorable matchup's by disguising coverages and bringing pressures from unexpected angles. The effectiveness of LeBeau's system is beyond dispute. Yet it has vulnerabilities, one of which is against the short yardage pass. To neutralize that threat, LeBeau's system demands that players stop the run, forcing teams into third and long situations.

Stopping the run has become problematic in Pittsburgh of late, however. 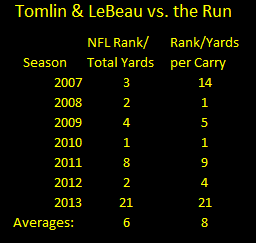 It would be grossly unfair to heap all of the blame for this decline on the defensive line.

As Neal Coolong has pointed out, James Harrison garnered headlines, highlights and Ray Anderson fines for his ability to terrorize quarterbacks, but his prowess vs. the run was as lethal as it was underrated. And as Coolong also indicated, the failings of inside linebacker Vince Williams contributed much more to the demise of the Steelers run defense than with Steve McLendon's inability to be Casey Hampton.

With that said, responsibility for stopping the run in Dick LeBeau's system starts with the line.

And therein lies the problem.

The 2014 Steelers arrive at St. Vincent's in Latrobe with a gaping hole on the defensive line. Cameron Heyward came on strong in 2013 and Steve McLendon played better than he was given credit. But Ziggy Hood is in Jacksonville, leaving a void at left end.

Yes, the Steelers did sign nose tackle/defensive end Cam Thomas in free agency. However, his primary role is to serve as a backup/relief for McLendon at nose tackle while rotating in 10-15 snaps a game at end. In short, if the Steelers start a pair of Cam's at defensive end for much of the season then, as Nick Kelly put it, "[the Steelers] are in trouble."

There is still the possibility that defensive end Brett Keisel could be re-signed, but he is far removed from his prime at the age of 35.Yours truly is on the record favoring Keisel's return, but this point, Keisel is best suited for a sort of player-coach, emergency stop gap situational player.

Perhaps more disturbingly, if the saber metric sages are to be believed, he struggled against the run last year, where the Steelers slipped the most. Keisel might be destined to return. Dale Lolley, who went as far as to report Keisel's locker hasn't been cleaned out, also indicated that if he's back, it will be as a 10-15 snap a game situational pass rusher

But the Steelers did pick up two defensive lineman in the NFL draft, with Stephon Tuitt in the 2nd round and Dan McCullers in the 6th. Mitchell himself has already said that Tuitt is like a young Aaron Smith.

All that would seem necessary, then, is some Mitchell magic? Right?

The answer is yes, but that is at once the problem and the solution.

One of the virtues of a 20 year tenure as a position coach with one team in the NFL is that it gives you a statically significant pool of data to analyze. Here's what they say about rookies in Johnny Mitchell's system: 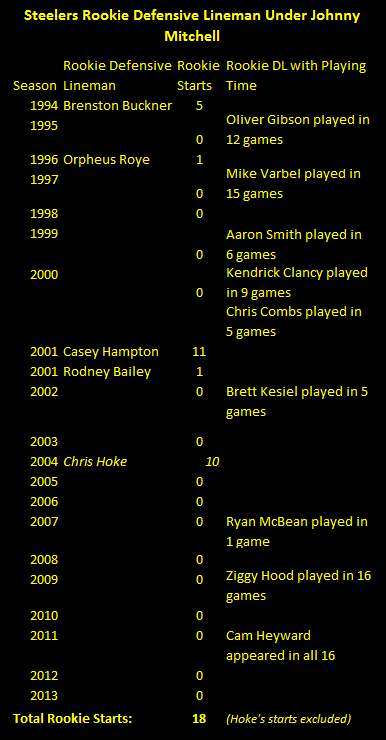 And it's no secret why. Prior to the 2014 NFL Draft the Pittsburgh Post-Gazette's Gerry Dulac described Johnny Mitchell's methodology like this: "they bring them in, strip away everything they've been taught and teach them the Steelers way."

If you view the Steelers defensive lineman development process through the prism of the old nurture vs. nature debate, nature remains important, but nurture holds the definitive upper hand. Put in less abstract terms, Mitchell can't work miracles with minimal talent (see Jeremey Staat), but even raw talent must mature like fine wine.

And that's what makes the case of Stephon Tuitt so compelling.

Stephon Tuitt's name was linked with the Steelers in any number of mock drafts, often times in the first round. And BTSC's film review of his collegiate career reveals why. Tuitt arrives in Pittsburgh with the hand-hip control needed to stay on balance and control blockers instead of being controlled. Moreover, he displays an ability to recognize plays at the snap.

In short, Tuitt appears to have all of the tools needed to break the streak of bad luck the Steelers have had with both recent Notre Dame draftees and second round defensive lineman.

The question is, when? The Steelers need the process to happen sooner and not later.

It says here John Mitchell's ability to mentor defensive lineman played a huge role in the Steelers bagging One for the Thumb and the Six Pack. It also says here that Mitchell didn't make those contributions by cutting corners or relaxing standards.

The ability of Pittsburgh's defense to rebound strongly enough for a shot at the Stairway to Seven might very well depend on the answers the Steelers find to those questions while at St. Vincent.