Second year tackle Kelvin Beachum was noted to have played RT with the first team offense this week in camp. New offensive line coach Jack Bicknell Jr. emphasizes athletes with length at the tackle position. While Beachum may lack length, he isn't short on athleticism needed to play in the zone scheme. We look at his play from his rookie year to try and determine if Beachum may in fact be a better option at RT for the Steelers in 2013.

Kelvin Beachum, an offensive tackle out of Southern Methodist University, was the 248th pick (seventh round) of the 2012 NFL Draft. Many draft analysts questioned whether he could play tackle in the NFL and many thought that he would need to slide inside at offensive guard or center to make a roster. 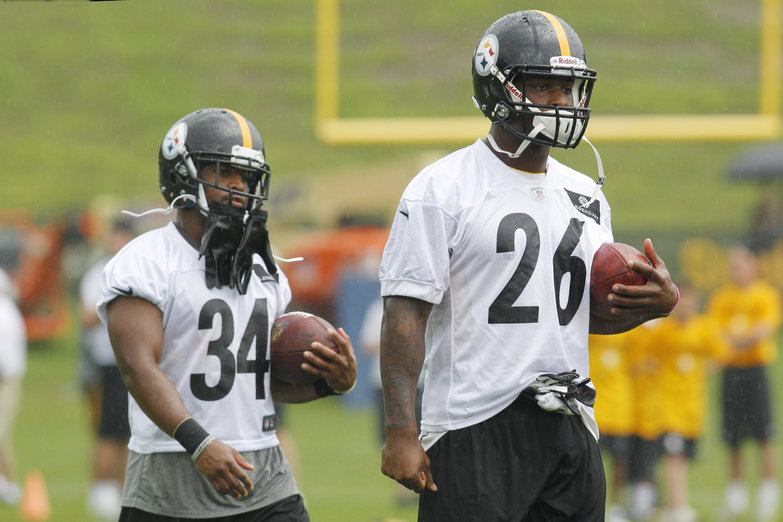 How does Stephens-Howling fit into the Steelers’ plans?

Beachum made the Steelers 2012 roster as a tackle, and when both Marcus Gilbert and Mike Adams, their second round draft pick in the same year, went down, Beachum took over the right tackle spot. In five starts Beachum played reasonably well there, considering his lack of experience. In 314 snaps (205 pass blocking snaps) he allowed only two sacks and three hits but did allow 13 other hurries while committing two penalties.

It was reported by Dale Lolley (and other twitter "reporters") that in the team's final 11-on-11 drill, Beachum was at right tackle with the first team and Gilbert was with the second team.

With five starts last year, there was enough film to put together on what to expect for Kelvin Beachum at right tackle.

It also may be enough film to say Beachum is the better option on the right side.

In this play the Steelers are in a shotgun formation with Beachum one-on-one with Ravens' defensive end Paul Kruger. As the play begins he does a nice job sliding out to meet Kruger. He plays with a low base and is handling the contact nicely. His attempts to break Kruger contact are ineffective and Kruger is able to extend his arms giving him space to make a move. Helped by a little shove to the outside by right guard Foster, Paul Kruger makes his move to get around Beachum and eventually gets a sack. It could be argued that the QB Charlie Batch should have had plenty of time and should have released the ball by then this play highlights where Beachum deficiencies are in pass blocking.

Unlike what the so called draft experts claimed Beachum has good enough feet to be a right tackle and mirrors his opponents very well. He consistently however was beat in the hand fighting portion of blocking. With below average 33-inch arms, Beachum falls victim when he allows defenders to extend the arms when in contact. It is because of this that he has to do a better job of getting his hands on the inside of the defender and breaking the defenders hold when he is extended. Beachum also needs to increase he lower body strength to help him keep the defender close to him through contact. To counteract his problems in hand fighting Beachum tries to attack the defender first in his pass blocking. This causes him to get beat by the more experience defenders who will use his forward momentum against him. He needs to remain patient.

Against the run Beachum has different deficiencies and strength. In this play Beachum's major deficiency is highlighted in that he doesn't have the pop off the line of scrimmage. He is slow to block Baltimore defensive tackle Haloti Ngata and his hands are on the outside. Ngata tries to power Beachum back and has initial success but the strength of Beachum is highlighted in the rest of the play. Beachum re-anchors, re-establishes his balance moves his feet quickly to start to drive Ngata back. He fights to get his hands inside Ngata and when he does begins to push Ngata. Finally he is relentlessly continuing to stay on the defender. When Ngata tries to go outside to beat the block Beachum pushes him further outside opening a nice hole for the running back.

Kelvin Beachum struggles in firing out of his stance and driving defenders back off the line. He often loses the initial battle. However his quick feet make him have well lateral agility and can get in front of defenders on difficult backside blocks. He understands how to execute the cut block and uses it. Beachum's problems in the running game will be hidden well on zone plays. For starters the concept of the zone involves an initial double team which will hide his driving problem. Beachum has shown on film a good ability to double team and then peel off to the second level though at times he peeled off too late. The zone scheme also emphasizes lateral movement of the defensive line which would play into Beachum's strength. Finally Beachum won't quit on the block till the whistle which can help him win the war despite losing the initial battle against the defender.

In this last play we see how good a pass blocker Beachum is when he puts everything together. In this play the Steelers are in a shotgun formation and run a play action pass. Beachum does a good job of sliding out in front of Bengal's defensive end Robert Geathers. At initial contact he has a low base but his hands are on the outside. As Geathers tries to make his move, Beachum's quick feet allow him to stay in front of the defensive end mirroring him well. When Geathers tries to go back up field Beachum takes his chance to get his hands back inside and drive him out. At the time Ben Roethlisberger releases the ball Beachum has shut down Geathers for six straight seconds - a tough feat to accomplish in the NFL.

Kelvin Beachum is a good pass blocker. He possesses quick enough feet, never stopping them and excels at mirroring his defender. However, he needs to get better at hand fighting, this tends to come with coaching and experience.

In the run game Beachum needs to get more explosive off the ball and build his lower body strength. He is too often playing patty cake with the defender not moving them off the ball. He does a good job though getting to the second level and blocking linebacker. He has good lateral agility and can make blocks many bigger tackles couldn't. In a scheme that admires athleticism in its tackle don't be surprised to see Beachum be the Steelers starting RT in week one if he has improved in his problem areas. This may become even truer given Gilbert's history with the coaching staff and constant struggle with gravity.