Steelers Film Room: Defense will look to do some 'under' achieving in 2013

The Pittsburgh Steelers are utilizing different fronts to take advantage of, what has become, a young and athletic front seven. Not many teams have a nose tackle that can make a play on a toss sweep, but the Steelers are one of them.

Share All sharing options for: Steelers Film Room: Defense will look to do some 'under' achieving in 2013

The early stages of this preseason have seen the Steelers utilize one a small variation of their base 3-4 defense. The front is popularly called the Under front. See the picture below: 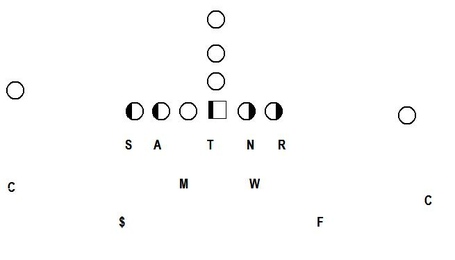 The picture is using 4-3 terminology. We'll fix that in a second. First, let's go over the positions. The S and R in the picture would be the Steeler outside linebackers. The T would be the nose tackle. The N and the A would be the defensive linemen. 4-3 teams utilized this front because it eliminated the weakside bubble (the guard is now covered) and it placed the Sam linebacker (S) as an immediate Force player on the line of scrimmage. The Under thus eliminated the two plays that gave the regular 4-3 fronts fits: weakside isolation runs and strongside power runs.

Gus Bradley rode the success of the 4-3 Under with the Seattle Seahawks all the way to a head coaching job with the Jacksonville Jaguars. The Steelers, I would argue, are in an even better position to be successful with this defense because they are not using 4-3 personnel. For example, look at what happens when you have a big, athletic outside linebacker as your weakside 5 technique (R in the picture above):

Woodley is a tough assignment because of his combination of strength and speed. There is no way that a Steeler defensive linemen destroys the offensive tackle as Woodley does here. This is the type of thing that you are accustomed to seeing Geno Atkins do for the Cincinnati Bengals. It looks as if Dick Lebeau wants to put an in-shape and motivated Lamarr Woodley in position to do many of those same things.

As was mentioned, the Under front kicks the Sam linebacker over the tight end from his original position as an inside the box linebacker. The downside of doing this is that the Sam linebacker is oftentimes not used to playing over a tight end. They are used to running downhill from their regular linebacker position. As a result, the reads from a tight end need to be mastered in addition to the reads from their normal linebacker position. Moreover, they also need to be able to use their hands and leverage the block of the tight end. For the uninitiated, this could be a problem. Jarvis Jones, however, is not uninitiated.

Jones treats the tight end for the Washington Redskins like a rag doll. Jones makes this look so easy; believe me, it is not. Jones is able to sink his hips to achieve leverage, gain inside hand placement, lock out the blocker, and finally control the blocker enough so he can disengage and make the tackle. I point all of this out to not only to give us some optimism after Monday night's game, but to also point out that this is a large skill set. Once again, this is the advantage of playing the Under front with 3-4 personnel.

As an aside, expect to see James Harrison playing this position for the Bengals seeing that he is currently practicing as a Sam linebacker in Cincinnati's 4-3 scheme.

Finally, the Under front gives the Steelers defensive linemen some more freedom to make plays. The inside linebacker reads become much simpler. I wrote an article a while back describing one of the more impressive reads I saw Larry Foote make last season. With the Under front, the linebacker reads become much simpler. As a result, the defensive linemen can rely more upon their athleticism to make plays. The following play illustrates that concept well.

We are all excited about what Steve McLendon can give us at the nose tackle position. Sideline to sideline pursuit is something to be excited about.

It will be interesting to see how this trend develops as the preseason leads into the regular season. The Steelers oftentimes had a difficult time generating a pass rush on play action during the early downs. With the Under front, the guard now has to block a 3 technique defensive lineman one on one. Who will the Steelers put there? Will the Steelers continue to put Woodley as the weak 5 technique? This gives the offense two choices: run at Woodley or run at Troy Polamalu who is aligned with the offensive strength.

Having athletes makes any coach look smarter. If the Steelers young defensive linemen and linebackers continue to develop, Dick Lebeau might be able to join another elite organization in addition to his membership in the Pro Football Hall of Fame.