With two preseason games in the books, we look at Gilbert's play as a pass blocker to see if the criticism is fairly placed.

Marcus Gilbert has taken the brunt of the criticism of the offensive line. Steeler Nation will not let him forget that his poor technique caused him to be pushed back and eventually fall on David DeCastro in the preseason of last year.

He has been put into Tomlin's dog house in the past for poor practice habits and came into training camp at least 15 pounds overweight. It's hard to forget his collapse at the end of the conditioning test this year, too.

After reviewing his past two games, it's clear the criticism he's receiving - or at least the volume of it - isn't fair. The Marcus Gilbert of 2013 has so far been much improved as a pass blocker.

I'll start by breaking down the four pressures Gilbert has allowed in the first two preseason games.

In Week 1 against the Giants, Gilbert played in 33 snaps with 17 of them being as a pass blocker. He allowed only two pressures, both of which only hurries on the QB. (I incorrectly had him at three, his third was actually during a play he was blocking for four and a half seconds) 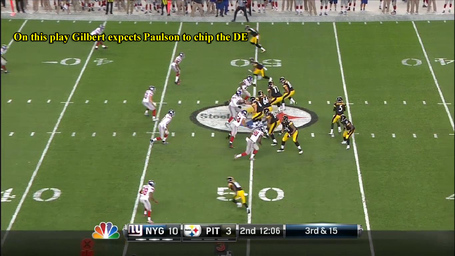 This is the first pressure allowed by Gilbert. However this pressure can be attributed to David Paulson not Gilbert. Paulson is required to chip the defensive end before going out for the route. It is because of this outside help that Gilbert slows his kick slide. He actually started the play very nicely with a smooth kick slide and his backside pointing at the QB. 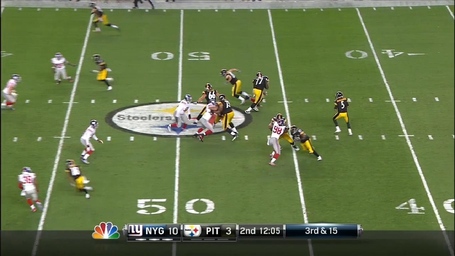 Paulson whiffs on his block which puts Gilbert in a bad position. He is able to stay on Moore enough to wash him outside so Gradkowski could step up. 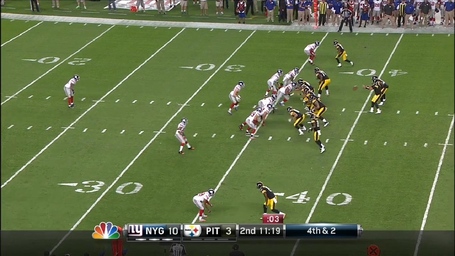 From the start of the play Gilbert sets too far outside. This gives Moore the inside lane to the QB. His shoulders are nearly parallel to the line of scrimmage and his backside is not pointed at the QB. 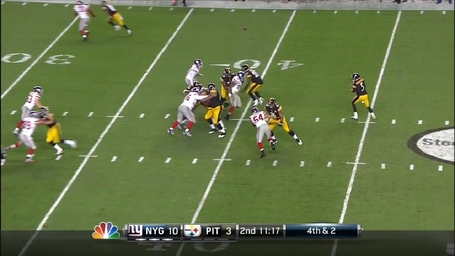 Moore gets inside Gilbert easily. Gilbert is able to push Moore enough so that Gradkowski can escape out the right.

Against the Redskins, Gilbert played 23 pass blocking snaps and registered two pressures. One was a forced fumble sack by Ryan Kerrigan and the other was a QB hurry. 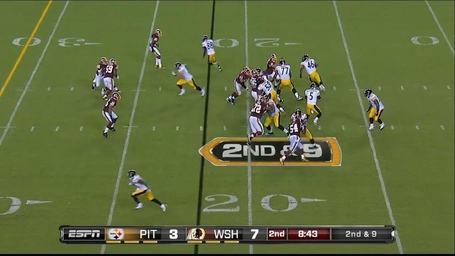 From this picture alone I could tell you that Gilbert is going to get beat. Why? He takes too shallow of a pass set. Look at his shoulders. They are nearly perpendicular to the line of scrimmage. He needs to take his set wider because this is a five step drop. A good rule of thumb for an excellent pass block is to always have your butt pointing at the QB throughout your pass set. Gilbert doesn't do this and opens the door for Kerrigan. 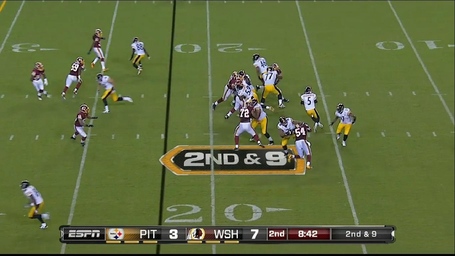 As the play continues you can begin to see what I am talking about. Gilbert is now perpendicular to the line of scrimmage. Kerrigan now has a path to the QB that doesn't involve going through Gilbert to get there. 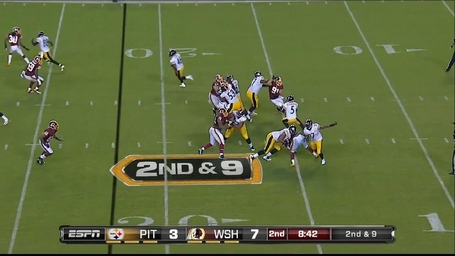 Kerrigan rips through Gilbert (hopefully Jarvis Jones was watching) who can do nothing but give him a desperate push to prevent him from hitting the QB. Kerrigan is pushed off course but is able to swipe at the ball and cause the fumble for a sack. 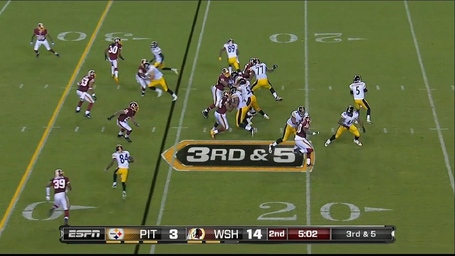 Similarly to the sack he allowed Gilbert takes his set too narrow. On the capture above Gilbert is taking his third step and it is almost straight back. Once again his backside is not pointing at the QB. He needs to step out towards the hash mark more get his hands on the defender and begin to drive him wide. While it isn't as drastic as the sack play Gilbert is setting himself up to fail. 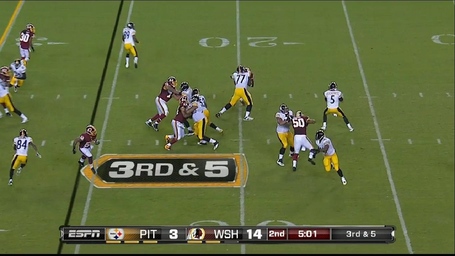 As the play continues Gilbert's shoulder become perpendicular to the line of scrimmage. On this play he is actually luck that the Redskins' OLB No. 57 chose to contact him instead of run to the outside. It is because of this Gilbert is able to use his size and strength to keep the defender from getting to the QB. Instead it just causes Gradkowski to make a quick decision.

I keep hearing from people that Marcus Gilbert is slow footed and that is why he is continuously beat. Gilbert has had 40 pass blocking snaps and allowed four pressures which is definitely not up to par but it is what he has done between those pressures and how he was beat that have me encouraged.

Gilbert has fast enough feet to handle 90 percent of the pass rushers in the league. He showed that against Kerrigan, whose only pressure going against Gilbert was the sack. Other than that play Gilbert did a nice job of sliding out under control with Kerrigan. I would like to see him keep his hands inside more during his slide as he exposed his chest a few times and was driven back.

Why Gilbert was beat then?

It was a product of poor footwork and play awareness. He had too narrow of a pass set focusing on getting deep on two of his pressures This is likely because he didn't trust his foot speed. Gilbert needs to focus on keeping his backside pointing at the QB and this means having the awareness to widen his pass set one five and seven step drop and narrow his steps on one and three step drops.

Gilbert also begins to rise in his pass drops as the drive continues. When he plays low and keeps his hands inside he is hard to bull rush but when tired he will play higher and he still needs to keep his hands closer to his chest during his pass set.

Gilbert has made his mistakes this preseason and it has hurt his pass blocking but he looks improved as a pass blocker. His biggest strides have been in his bases width and his pad level. In his last two years Gilbert was playing with too narrow of a base and was knocked down and pushed back easily. This year he has consistently played with a wider base and better knee bend. Gilbert's flaws are "coachable" they aren't effort related or quickness related as some have alluded to. Gilbert should only improve as the season continues he has only one full season under his belt and is still only 25 years old. More importantly Gilbert looks like he is willing to improve and the lazy attempts of a block he showed last year at times have yet to show up on film.