Marcus Gilbert had not played up to his talent in the first two games. He has allowed three sacks, two hits and a handful of hurries. Motivation might have be the biggest factor to his poor play. Pittsburgh's coaching staff decided to bench Gilbert in the middle of the Chicago game. We look at Gilbert's play in Week 3 of the season and analyze why that decision might of had an ulterior motive other than putting the best five linemen on the field.

Marcus Gilbert was a second round draft pick of the Pittsburgh Steelers in 2010. While he has shown some talent, he has definitely drawn the ire of the coaching staff over the coarse of his three years with the team. He was called out for his practice habits in his rookie year by the head coach, showed up to training camp out of shape in 2011 and had played poorly in the first two games of the season. His play however did look remarkably better in Week 3 versus the Chicago Bears. Below is a play in the first quarter prior to his benching. 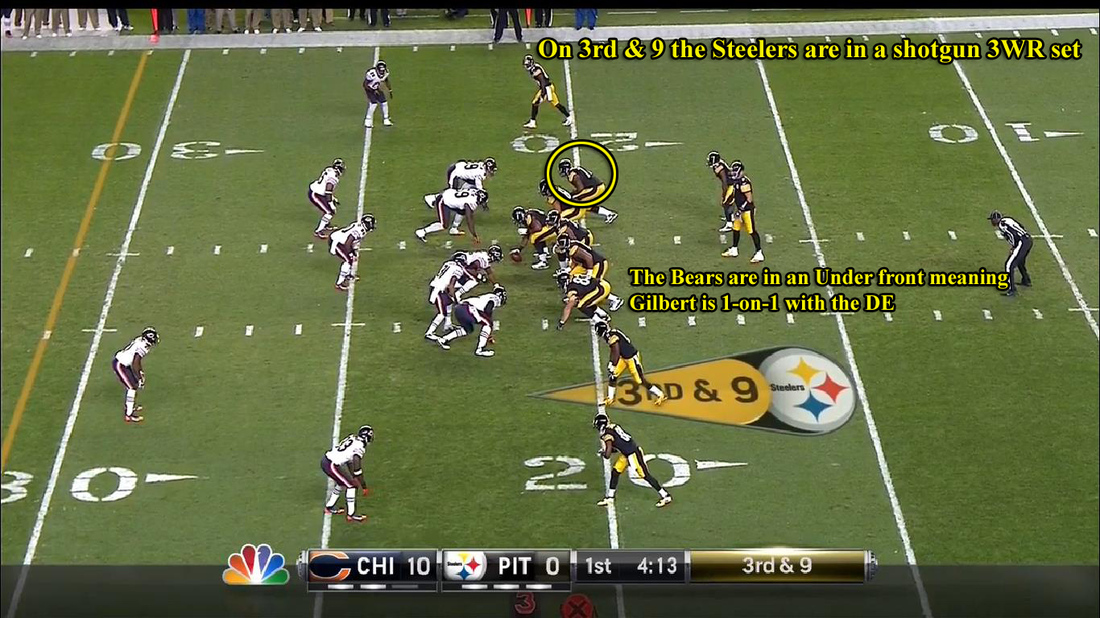 This play begins on third and nine and Pittsburgh's offense is in the Shotgun formation. The Bears defense is showing an under front meaning that Gilbert will likely be on an island with the defensive end. 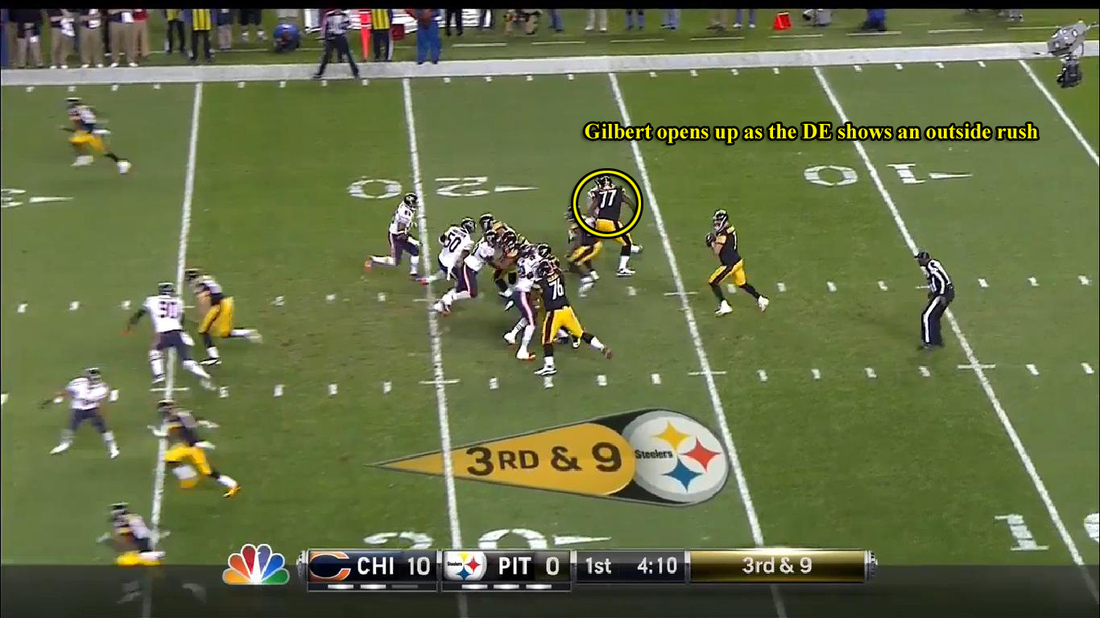 As play continues from the snap Gilbert does a decent job of mirroring the DE. The DE shows an outside pursuit angle and Gilbert opens up his hips in order to prevent the DE from getting by him. 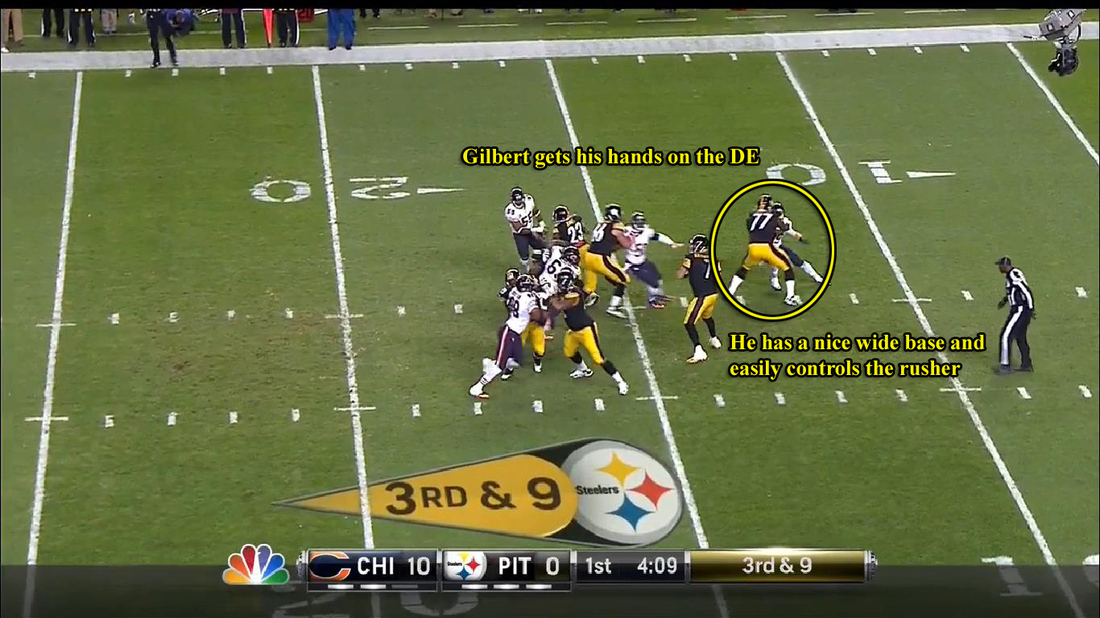 Gilbert is able to get his hands on the DE and prevents him from either getting around the corner or getting back inside up field.

Gilbert was swapped out on the next drive for Kevin Beachum a second year utility man. While up until this point Gilbert didn't look bad, he was also dangerously close at times to letting his man through. However considering Mike Adams was allowing his defender to hurry Ben a lot in the first half, Gilbert's play was much better. The following is from the drive he returned for, after the first benching. 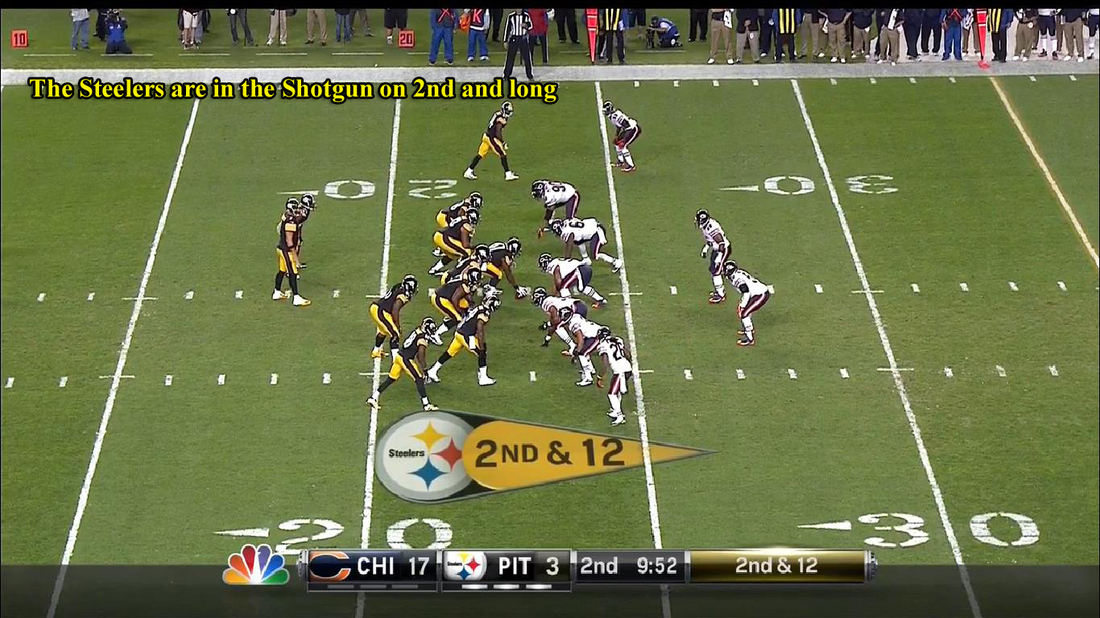 On second down the Steelers show a shotgun look. The Bears have eight men in the box almost daring Pittsburgh to throw the ball, however they will drop many of the men they show at the line after the snap. 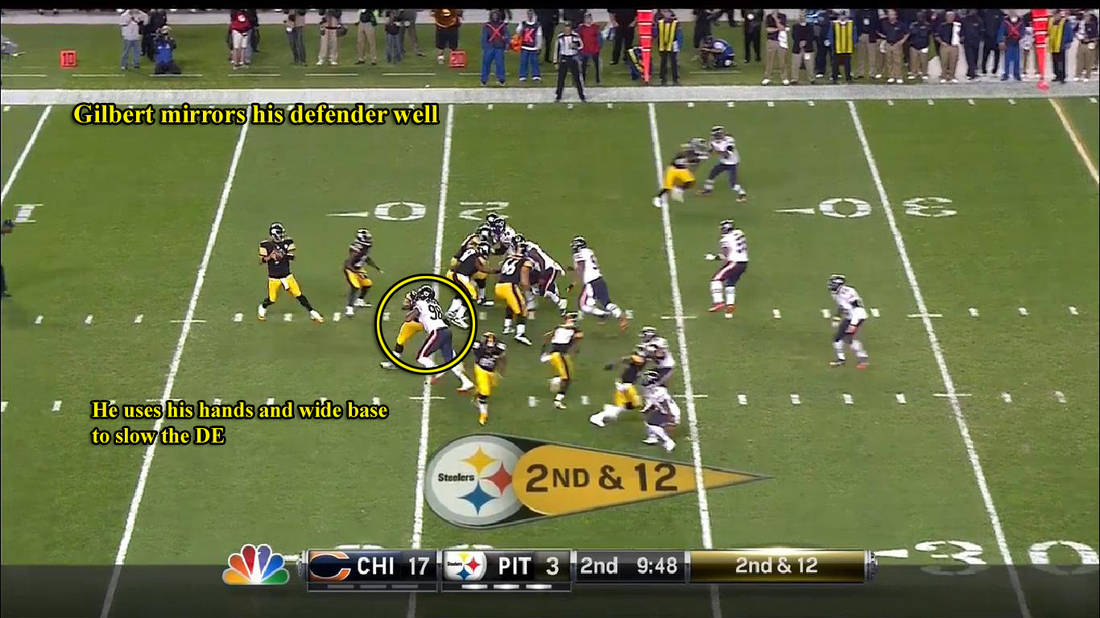 Marcus Gilbert starts by mirroring his defender then getting his hands on him and preventing the outside move. 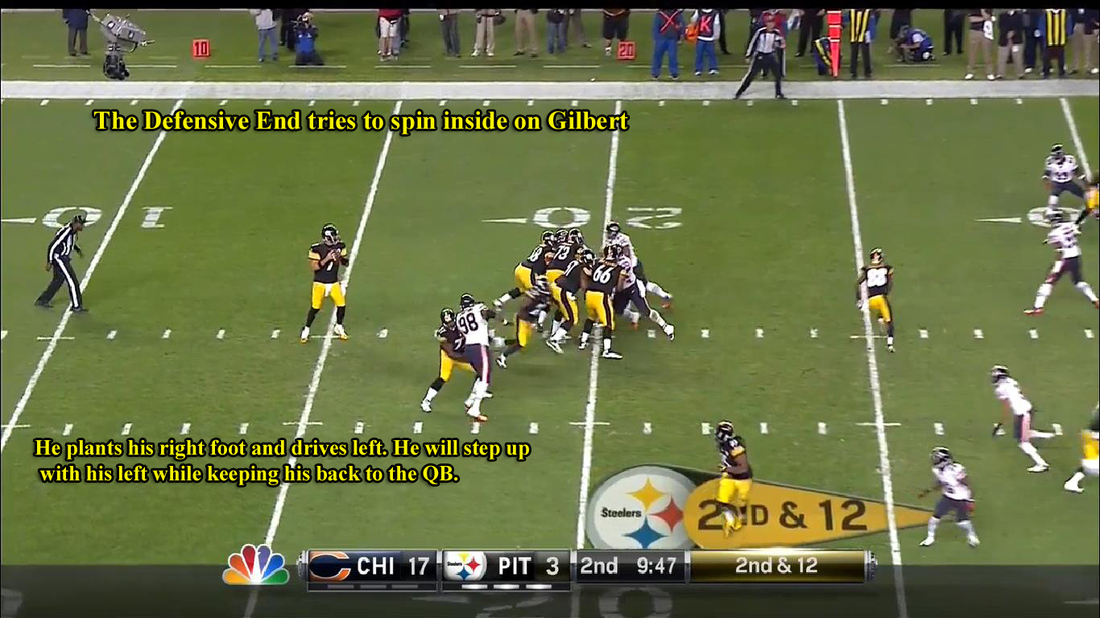 Since Gilbert held off the outside the DE tries to spin back inside. Gilbert is able to plant is outside foot. Keep the defender on his body with his hands and step up with is inside foot. He played the spin move very well and never gave the defender an inside lane because he kept his back pointing at the QB.

The second benching was puzzling to me. Gilbert, who had allowed one hurry at the time, had played far better on the next two series which included a scoring drive. He did allow his only hurry but I believe he showed some good technique.While the second benching was questionable to me it seemed to have worked. Gilbert played far better in the second half of the game and didn't allow another pressure the entire night. The following is one play from the 4th quarter of the game. 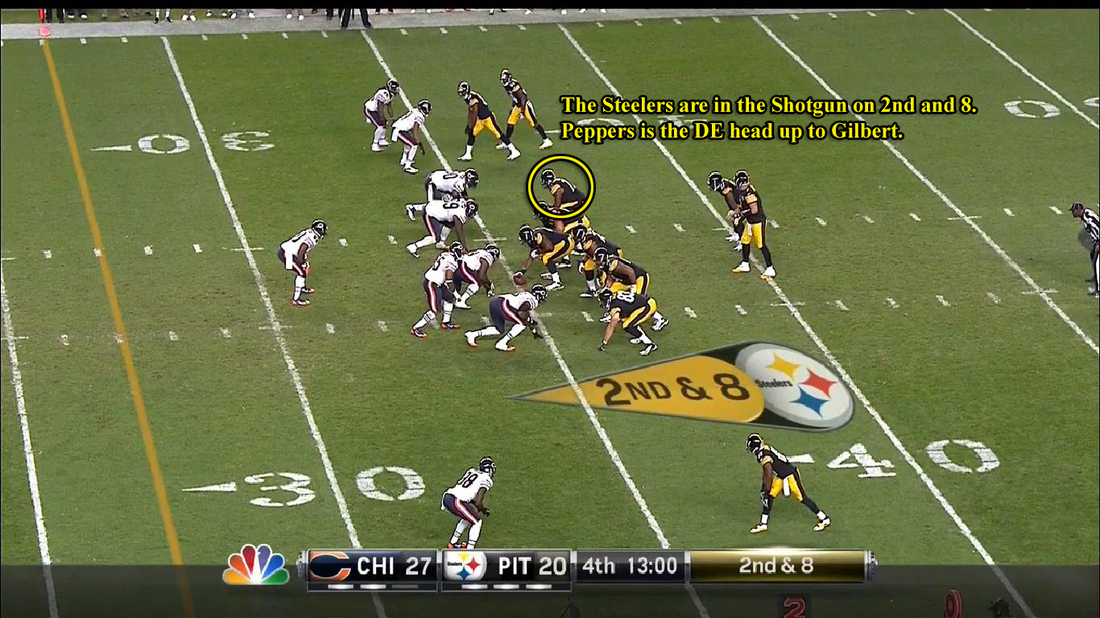 On this play the Steelers are in a second and eight in the fourth quarter. They have narrowed their deficit to just a touchdown. Gilbert has the DE Julius Peppers head up to him and the Bears are in an under front, again meaning he is 1-on-1. 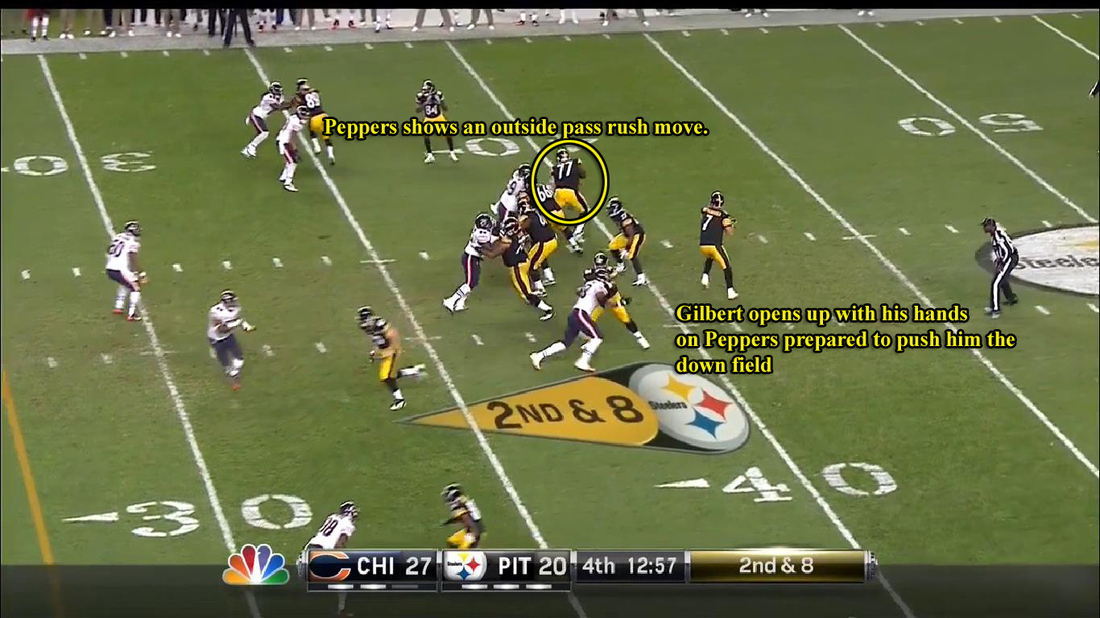 Peppers shows an outside pass rush route and Gilbert does an excellent job of getting his hands on him. He opens up his hips to account for Peppers' speed, but plays with a lower base to prevent the power around the corner. 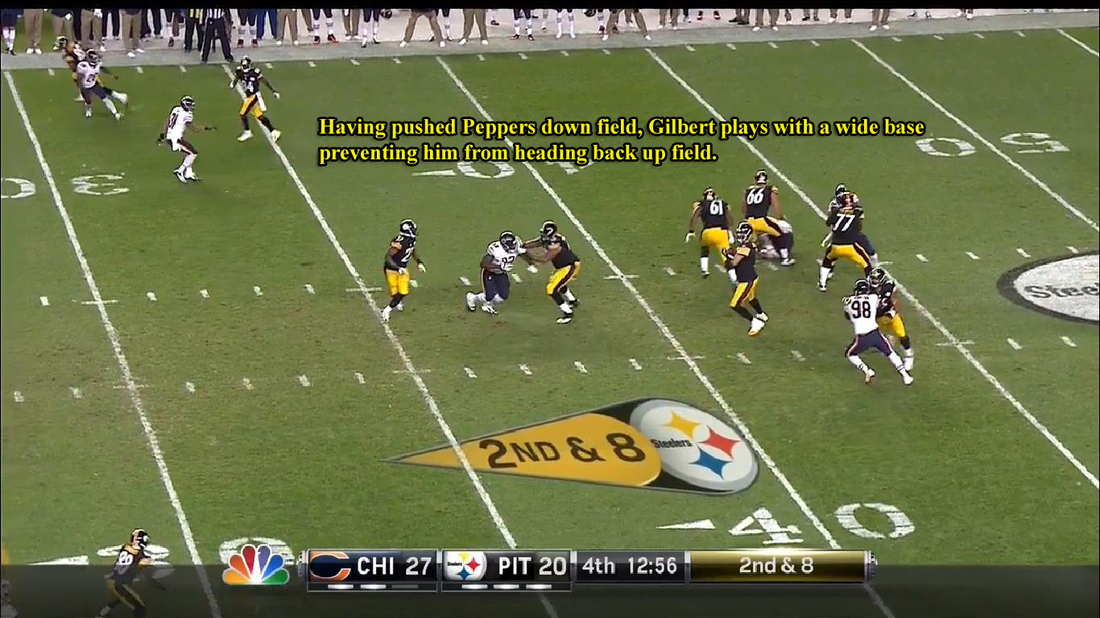 Gilbert is able to wash Peppers down the field. He keeps his body on Peppers, with a low base to prevent him from getting back up field.

On the night, Gilbert played 53 of 66 snaps on offense. As a pass blocker he had 39 pass blocking snaps and allowed only a single hurry. Gilbert was clearly not the Steelers worst offensive lineman or even the worst offensive tackle. Adams allowed two hits and five other hurries in the game (one hit and four hurries came in the first half) and he was over matched when facing Peppers.

If Pittsburgh was truly rotating the tackles because of their play on the field vs. Chicago then they should have tried Beachum at LT more than they did. I believe the Steelers staff benched Gilbert for two reason. The first is that Beachum is a player that any coach would love, he gives it his all on ever snap whether in practice or in the game and is intelligent. Gilbert has been criticized for his practice habits. This benching then might have been premeditated prior to the game if the offense struggled. The second reason could have been to serve as motivation to Gilbert to hopefully play better. Gilbert didn't allow a pressure in the entire second half so I'd say it work.

Yes both offensive tackles had played poorly in the two prior games but they were not the sole reason for poor pass protection in this game. Ramon Foster was clearly over matched as a pass blocker allowing a sack and three other hurries. Roethlisberger was pressured up the middle on multiple occasions. It was the RBs (Jones and Redman) and interior line that was responsible for the sacks this game. The Steelers need better play from the entire group of offensive linemen as pass protectors and Kelvin Beachum is not going to fix that no matter what position he plays. The unit played far better in the second half and hopefully that is a sign of what is to come . If it is not and the blocking doesn't improve this team will need look for answers in the bye week whether that is new quicker passing or new personnel blocking.