David DeCastro was considered a student of the game, more of a technician than a mauler, when he was drafted out of Stanford. He was known for not forgetting his mistakes, instead choosing to remember them to improve. As he entered the Chicago game he was looking to build upon a solid individual performance in the running game in the week prior, while hopefully culminating in a better performance for the unit in its whole.

The coaching staff stated in the week prior that the outside zone would be utilized more against the Bears. The last time the Steelers tried to run the outside zone DeCastro took out the knee of Maurkice Pouncey. If he wanted to make an impact this would be exactly where he needed to start.

In the first drive of the game the offensive line blocked beautifully on a draw play that came off of a fake screen action. The play went for 11 yards but unfortunately a Roethlisberger strip sack would end it two plays later. The Steelers chose to pass more on the second drive only trying one run (a dive play) which gained only one yard. On second run of the third drive the team finally decided to debut the outside zone play. 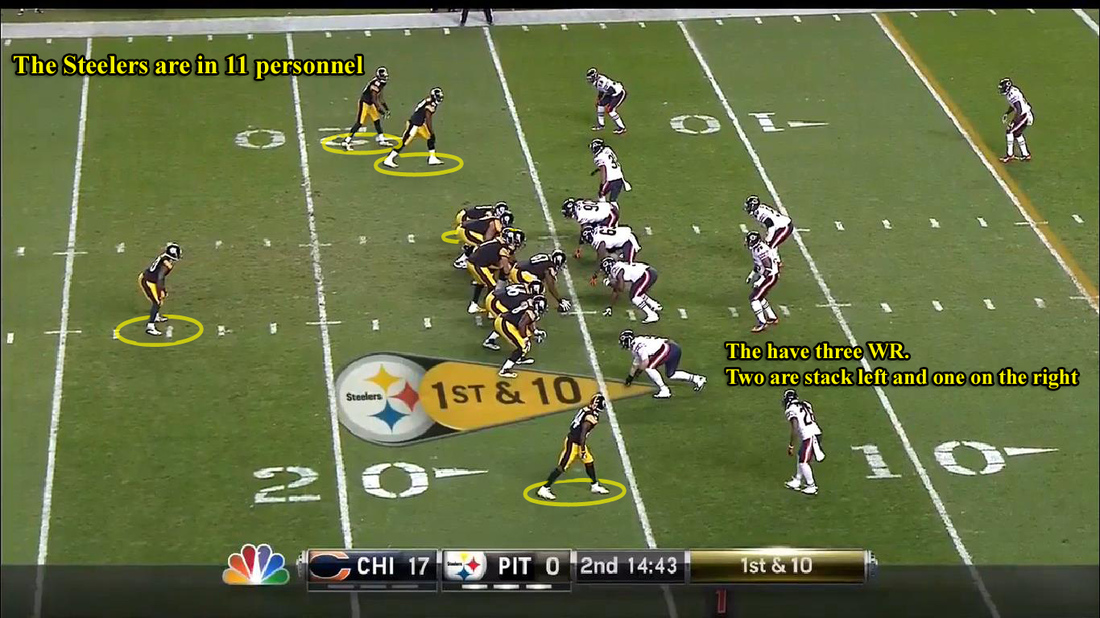 The Steelers are lined up with 11 personnel grouping in a singleback formation with the tight end on the left side. The have three wide receivers (two to the left and the other on the right). The Bears The Bears show a standard front with seven men in the box. 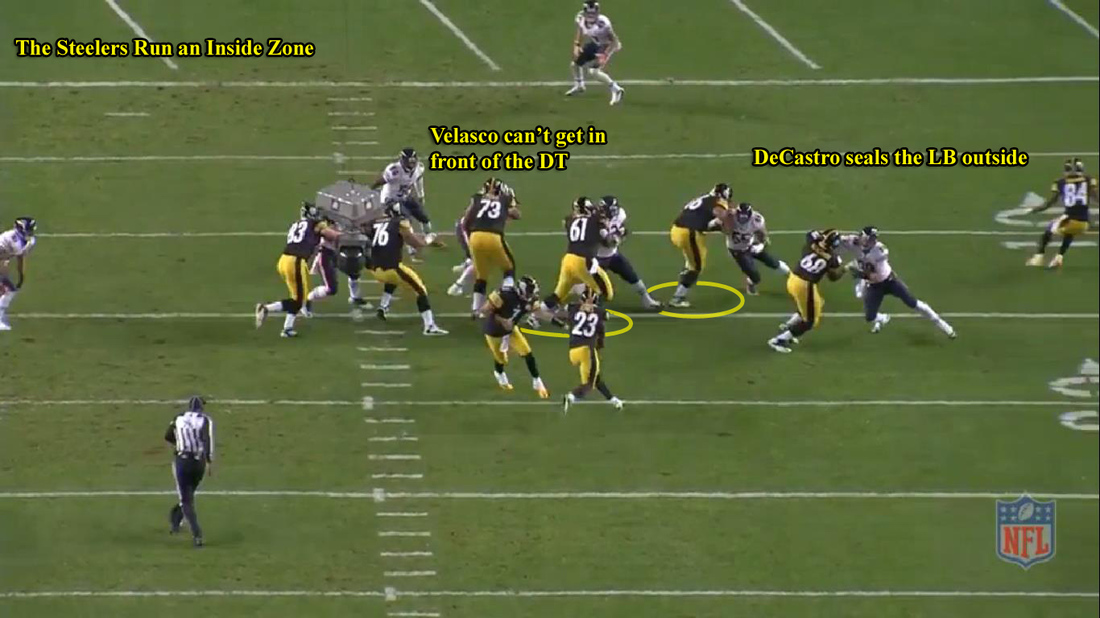 The play begins. It is an inside zone to the weak side an adjustment Haley put in due to the inability of the TEs to block the end man on the line of scrimmage. Inside zones rely more heavily on the interior linemen's blocks, which is a strength of this line, Running to the weakside also has the advantage of the natural gap between the one-technique DT ( between the center and weakside OG) and the seven-technique DE (just outside the OT) which is right where the inside zone is designed to go. When Felix Jones gets the ball his read is the playside guard's block and the center's block. DeCastro has a free shot at the SAM linebacker he hits him and seals him to the right and outside.The center Fernando Velasco is unable to get in front of the DT so instead chooses to drive him laterally to the right in order to make the read for the RB an easy one. Felix correctly sees the cutback behind the center. 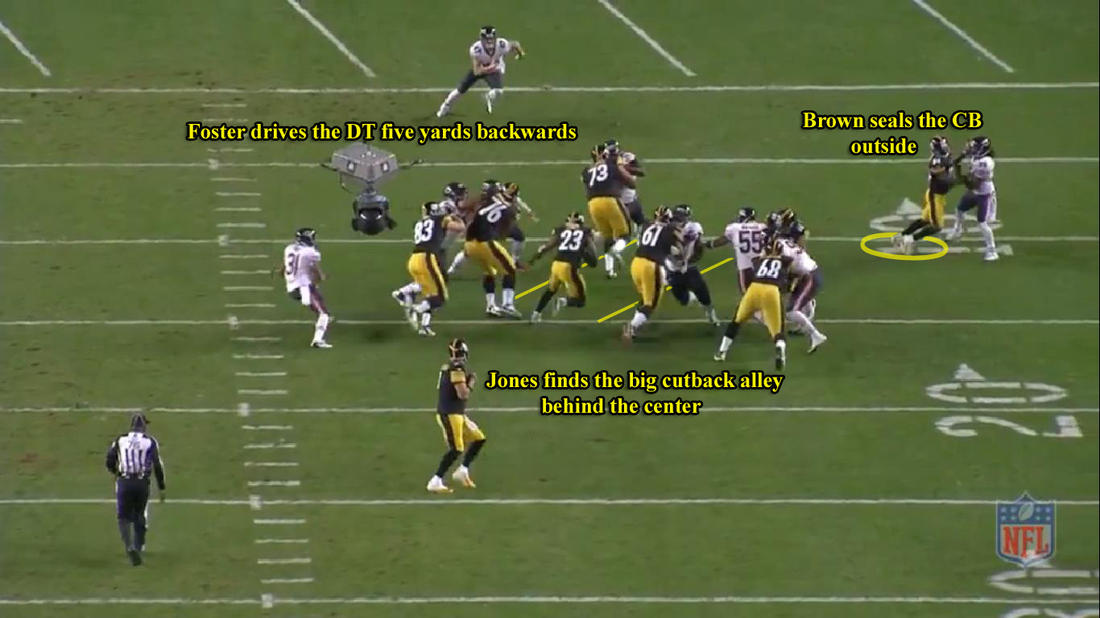 The backside OG Ramon Foster has driven the three-technique DT well off the line of scrimmage. Antonio Brown has sealed the CB. Adams and Heath have a backside combination on the backside DT. Felix has a big lane to make his run. He is slowed by the Mike LB and tackled after a nice six yard gain.

This was a very well blocked play on the playside and only one player prevented this from being a huge gain or even a touchdown. That player was Heath Miller. His poor footwork on the backside prevented him from getting in front of the RE. Since Miller could not get in front of the backside DE, Adams had to stay to help Miller block. It is because of this Adams was unable to get to the Mike LB, who he had a free shot at. I don't want to be "that guy " but Heath has little practice with the zone footwork and a backside cut block by him on the RE would have allowed Adams to get to the second level. Regardless DeCastro, Velasco and Foster, as well as some subtle correction in the play design by Haley, were the reason this play worked as well as it did.

The Steelers offensive line was still inexperienced with the outside zone but they are very familiar with the concepts of pulling the backside guard in a man/gap scheme. Usually the Pittsburgh offense favors pulling the LG to the right but the Steelers have the unique ability of a RG, in DeCastro, who was praised for his ability to pull in college. The Steelers chose to pull him in a few different ways against the Bears.

One way Pittsburgh chose to pull DeCastro was in the traditional manner pulling him to the playside as the backside OG on running plays to the left.

The Steelers were in a shotgun formation with three WRs (two on the right and one on the left) and the TE lined up on the right. On this first down play, Chicago had only seven men in the box which means it was an ideal running situation. The play began as a run to the left and DeCastro pulled from the backside RG spot while the rest of the linemen played a man assignment. David Johnson followed the RE who crashes right.

This was the good old power run. The Steelers have run this play many times before but there are two differences in this play. The first was that the play was "35 power" as oppose to the "36 power" that the Steelers ran under Arians. The reason is because it was going to the five hole which is outside of the LT instead of outside the RT. The second difference is that it was being run from the shotgun formation. Using the 'gun forces the defense to respect the pass and the Bears did respect the pass on this play. This change isn't novel to this season. Haley has run the power several times from the shotgun but he ran the "36 power" which means Foster was the one pulling. Foster tends to put his head down and will miss his guy when he pulls. This happened on a third down play against the Bengal. DeCastro is a far better pulling guard. As he came around the corner on the play, he saw the Will LB Briggs and blew him up, driving him left and out of the play. There was a huge hole for Felix Jones who gets nine yards on the run.

Once again this play was one block away from a huge gain. The RE crashed inside and Mike Adams took him. David Johnson was insistent on following him, by the time he decided Adams had him the RB had past him. Johnson needed to notice the DE was going inside and instead head straight for the Mike LB. Sanders blocked his CB beautifully and if Johnson isn't late to the Mike (who made the tackle), Jones would of had only the safety to beat for an easy twenty yard gain or more.

Once again subtle changes by Haley and DeCastro's great block on the pull made this a successful play. There is one other way the Steelers tried to use Decastro's pulling ability.

This play was the very next play after the shotgun run above. Pittsburgh was in their 12 personnel with Heath and Johnson both on the right side. Once again the Bears had only seven in the box and deep safeties. They were up by 14 points and there was four minutes left in the half. The Bears love to play Cover 2 and that was the look they showed presnap.

Haley once again shows a nicely designed play. The play was run to the right with DeCastro pulling right. Not many coordinators would pull their playside guard. It leaves a gap in the line that more athletic D-linemen can shoot to make a big play. However Haley puts two TE on the play side whose responsibilities were to pin the LE and the SAM linebacker to the inside and allow the tackle to take the three -technique DT, who could shoot the gap left by DeCastro's pull. This is what is known as the pin & pull sweep.

DeCastro pulls right. The LE was worked right by Johnson while the Sam backer tried to shoot the gap between Miller and Johnson. Miller easily slowed him and sealed him left using his momentum. Sanders blocked his CB preventing him from getting to the play. This left DeCastro in open space to block the strong safety. With an easy 100 pound advantage, DeCastro easily blew him out of the way. Dywer had a huge hole and was off to the races to beat the Mike LB. He beat the MLB and had only the FS to beat.. Dwyer lowered his shoulder, delivered the blow to the FS but was tackled for a 25 yard gain. This was not the first time the Steelers ran this play in the game. They ran it in the first quarter for a gain of six, as the WR failed to hold his block long enough. They ran it in the second quarter but Miller was unable to recognize the SAM blitzing and it was stopped for a loss of four. The third time, was really the charm for this play.

Millers block on the SAM backer, Sanders excellent sealing of the CB and DeCastro blowing up of the SS gave Dwyer a hole big enough to drive a truck through as the old cliche goes. From there Dwyer used his speed to prevent the MLB from making the play by outrunning him to the corner. (This is definitely something Redman wouldn't have been able to do. )

Overall Haley deserves some major credit to the changes he made in the running game. Up until this game the Steelers were not playing to their strengths in the run game. The Steelers were so comfortable with pulling their LG on runs but Foster has struggled with hitting his targets when pulling. (He is a decent drive blocker though) DeCastro however can pull, this was by far his best skill in college. Haley made the changes needed to utilize their strengths and this was by far the teams best rushing performance of the season.

While adding in a little more of the outside zone, Haley decided to run the ball to the outside in the man blocking scheme as well, playing to the athleticism of his young line. The big difference was the decision to pull DeCastro and he showed why against the Bears. If the Steelers want to continue to run the man/gap scheme in between zone runs they are best served in pulling DeCastro often on outside runs. Haley seemed to understand this against the Bears and designed runs to get DeCastro out in space as a blocker both traditionally and non-traditionally.