When people think of speed on offense, they think of throwing the ball vertically, down the field. However, using that speed to stretch a defense horizontally can stress a defense and create a myriad of big play opportunities.

When the Steelers drafted Le'Veon Bell last year, one of things I found most intriguing about the pick was his ability to catch the football.  Having running backs that can catch really stresses a defense, and I wrote an article about one such example - the Snag Route:

What the Snag concept does is that if forces the defense to cover the width of the field, while also giving the defense a vertical threat.  The QB's first read is the sail route by the Z, followed by the snag route by the Y and then finally the flare.  The sail route is a pre snap read.  If the corner has inside leverage or if there is only one safety high, the QB is going to take that route.  If the route is closed pre-snap, then the QB will automatically look at the snag/flare combination.

What do X, Y, and Z mean for receivers?

Neal Coolong •Behind the Steel Curtain

Not all receivers are created equal and interchangeable, and the roles within the position of "wide receiver" are very different from one another.

What do X, Y, and Z mean for receivers?

A route combination like Snag stresses the defense a lot more than an empty formation (5 wide receivers, no backs).  Because there is no run threat from empty, the defense can play with 5 defenders in the box.  The defense now has 6 defenders against the 5 receivers from the offense.  However, against the look above, the defense still has to be sound against the run, while then trying to cover all 5 receivers.  Also, this is a quick read and throw for the QB so you are not trying to protect for a long time, and it is a high percentage throw.  By simply trying to throw the ball downfield out of an empty or spread formation, the defense can tee off and rush the QB while still playing coverage.  We saw enough of that while Arians was the OC.

A great example of what a horizontal stretch is what UCLA does with their offense. Here first, is the exact play that we diagrammed above:

Notice here that the QB reads the backside of the play, instead of how I describe it above.  That is simple to do; a tag was probably given to the original play call to tell the QB to start with his backside read.  Watch the curl/flat defenders on both sides of the formation get to the flats.  They have to do this because they know that UCLA will hit the flat player if they are left uncovered. Secondly, look at where those players are pre-snap.  They are not in the box.  The defense is stretched horizontally even before the ball is snapped.  What this does is open up the seams for the offense.  Once again, these are very high percentage throws.  That was an easy nine-yard gain.  However, what it also does is create favorable matchups down the field.

Contrast the quick motion here as opposed to just lining up in an empty formation.  The motion forces the defense to defend against the run pre snap, and it allows the QB to hit the back while they are in stride.  The QB could throw the flare here; the defender is one on one with the back and with a lot of grass to defend.  Instead, the QB throws the touchdown pass.  The defense went from a 3 vs 2 advantage to the deep safety having to cover a receiver one on one.  The curl flat defender had to honor the flare, leaving the safety on an island.  The receiver does a very good job of stemming his route late.  If he breaks his route to the post too early, the safety can play the route.  Instead, the receiver presses the route, thus forcing the safety to stay in his backpedal.  That just opens up more grass for the receiver to exploit.

To drive the point home about the need to stretch the defense horizontally, here is a route that the Denver Broncos tried to run repeatedly in the Super Bowl. 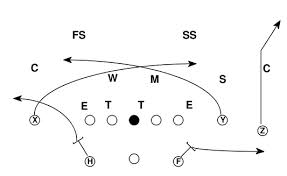 The Broncos made a living with this route all year, but Seattle was able to stop it because they did not cover the flats.  Take a look at the clip below:

I watched this game twice and it is amazing that Peyton Manning never threw the ball to the flats.  He stubbornly tried to throw the ball where it was covered.  Contrast how Seattle is playing this as opposed to the college team from the other clips.  If you let UCLA throw the ball to the flat, they will throw it every time.  Manning, not so much.  So, Seattle took advantage of that and was able to shut down the Broncos.

With the acquisition of Dri Archer, the Steelers have an opportunity to really stress a defense horizontally, which will help open up plays vertically.  It will be interesting to see where the offense goes in 2014.