It's been a rough start to the career of the Giants' first round pick, but he has a bright future.

The Steelers reportedly would have taken multi-dimensional wide receiver Odell Beckham Jr. in the 2014 NFL Draft had he fell to the 15th pick. The Giants scooped him up at 12, ending that plan.

It's been the highlight of Beckham's pro career so far.

Steelers would have taken Justin Gilbert or Odell Beckham 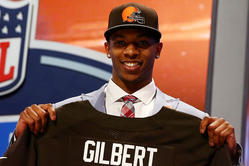 The Steelers reportedly had their sights on Justin Gilbert and Odell Beckham with the 15th pick, should either have fallen to that spot.

Beckham suffered a hamstring injury on the first day of training camp, and hasn't seen any action since then. Big Blue View reported Friday Beckham won't play against Pittsburgh in the Giants' second preseason game.

Beckham is a superbly talented receiver and special teams contributor, and for a team that likes to throw the ball as much as the Giants do, he seems like a great fit. While the Steelers have already seen outstanding aspects to the game of Ryan Shazier, the player they did draft, Beckham would have provided an immediate upgrade at wide receiver and could have provided a spark on special teams.

Shazier may miss the game himself, hobbled by a knee injury sustained earlier this week in training camp. Steelers coach Mike Tomlin referred to it as a "boo-boo" after it happened, but Shazier hasn't seen the field since.