5 things we learned in the Steelers first OTA session

Even if it's a bit early to think there was a lot to glean from the Steelers' first three full team practices of the 2013 season, there are still some tidbits to carry over into next week's second session.

Share All sharing options for: 5 things we learned in the Steelers first OTA session

And it doesn't impress Steelers coach Mike Tomlin. Clearly, he's going to wait until pads are cracking before he comments on how his team looks. That seems wise, although teams practice without pads more now than they used to. The point being, it's hard to determine how good of a running back Le'Veon Bell is if no one is tackling him.

There aren't many combinations of four words that speak more accurately to Steelers success than that. Since 2005, every year Polamalu has played in 14 or more games, he's been named to the All Pro team. In the two seasons he played seven or fewer games (2009 and 2012) the Steelers missed the playoffs.

Steelers have the oldest defensive starters in the NFL 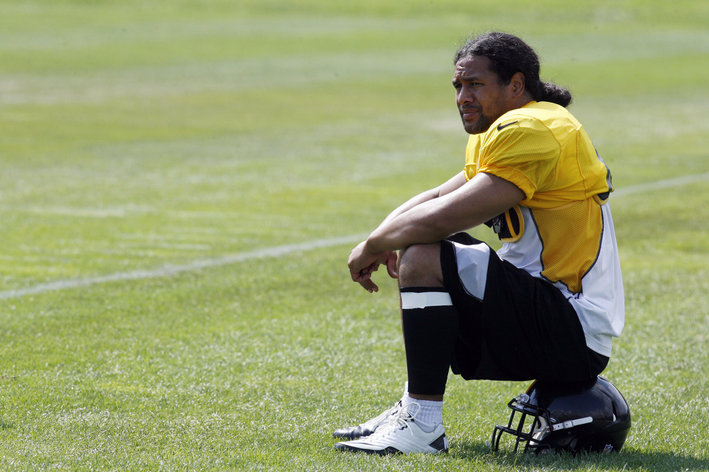 The Steelers look to again lean on experience on the defensive side of the ball, even with a surge of youth contributing.

Isaac Redman is reportedly 10 pounds lighter, and Le'Veon Bell said he had seven percent body fat at the Combine. With a new outside zone running scheme being implemented, the Steelers running game looks to get quicker and more decisive in 2013. The question is whether they can hold out from a health standpoint.

First round pick Jarvis Jones was hindered by a hamstring injury somewhat during these sessions (see "Football in Shorts is Football in Shorts"). Fifth-round pick Terry Hawthorne had bone chips removed from his knee, and he could miss the final two OTA sessions (May 28-30 and June 4-6).

Regardless whether teams are in shorts, full pads or business casual, it's still May. There's a long time to go before training camp starts, and odds aren't very good the roster in its current form is what the team will take with them to Latrobe. Moves will still be made, tweaks will be added. Reports have circulated on a more positive and edgier feel to this team, and that's probably the big positive to take away from everything.