Steelers vs. Jets: Gut check in the Meadowlands

There are a lot of concerning things going on for the Steelers future as Week 6 approaches, but the only thing they should be concerned with is beating the Jets.

Share All sharing options for: Steelers vs. Jets: Gut check in the Meadowlands

"The Steelers will play their most important game of the year in the Meadowlands."

If you read that sentence in August, you may be thinking about Super Bowl XLVIII. Nope. The Steelers have gotten themselves into an 0-4 hole to start the season. Now every game is their most important, starting with the Jets on Sunday.

The Jets are slowly getting the national media's attention behind the play of rookie QB Geno Smith, but it seems like Muhammad Wilkerson is what really excites Jets fans the most right now. He's playing at an elite level and he'll likely be featured in the team's defensive attack against a porous Steelers offensive line.

The Steelers are coming off the most depressing bye week any of the team's current players have ever been a part of. This team wants and NEEDS a win badly. If not for their incredibly slim playoff hopes, just for the assurance that they won't slip into a funk that leads them to an unthinkable 0-16 season. That's still a somewhat real possibility until they actually finish a game on top. Things could get pretty grim in Pittsburgh if the Steelers drop to 0-5.

BROWN IN BLACK AND YELLOW

Apparently, the Steelers traded something slightly more valuable than previous left tackle Mike Adams to the Arizona Cardinals for Levi Brown: Nothing. There are whispers that the Cardinals compensation is a conditional 2015 draft choice, but nothing has been confirmed yet.

On the field, Brown will have to try really hard not to be an improvement over Adams -- if he plays. His presence gives Adams time to learn and get better -- which is probable, because he literally cannot get worse.

If you have doubts about Brown being an improvement, look no further than Pro Football Focus' Twitter feed:

Steelers upgrading from our 68th ranked tackle in Mike Adams to our 60th in Levi Brown. Both bottom 10 in our pass blocking efficiency stat

See? At this rate, the Steelers only need to make 4 or 5 more of these kinds of trades and they'll have a decent left tackle!

Todd Haley has allegedly gone all Keith Moon and destroyed a rental home in Mission Hills, KS, according to the Pittsburgh Post-Gazette. Will this be a hindrance on his already subpar performance?

It really can't get much worse. The Steelers only offensive success seems to have come in the no-huddle with Roethlisberger calling the shots at the line. Maybe Mr. Haley can use this incident as inspiration to change his antagonistic ways. Probably not. And of course, it's possible he didn't actually commit the crime he's accused of. This story really doesn't have much to do with football. And in the current state of the media, Haley will be assumed guilty until he's completely exonerated. And even then, the story will rest somewhere in the dark corners of the public's memory as a stain on his reputation.

As far as football goes though, Coach Haley hasn't done a very good job in Pittsburgh. Family ties will only take a man so far. It seems pretty clear he shouldn't be a part of the team's future. 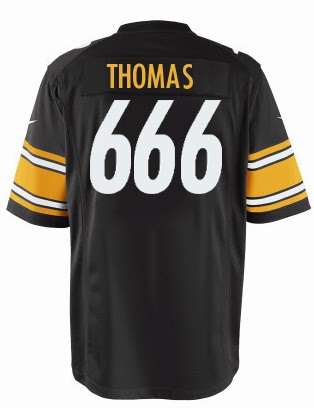 Thomas is reportedly going to get more snaps against the Jets. He's excited Steeler fans since the team traded up in the 2013 draft to get him -- remember last time they traded up to get a safety? If Shamarko is able to "unleash hell" this week, he may be in line for a starting role in his rookie season. It's typically a rare accomplishment, but this year the Steelers have put themselves in a position that calls for some outside-the-box thinking. Speaking of being outside the box, Shamarko will probably being playing deep coverage when Troy Polamalu lines up in any of his pseudo-front 7 designations, though Thomas is said to be poised for mostly base-defense looks.

Tackling will be the key for Thomas, but he shouldn't count on Ryan Clark missing as many tackles as he has so far in 2013. He's missed five in four games, but he wouldn't've been around this long if that was the norm. He's probably lost a step or two, but Adrian Peterson is pretty tough to tackle no matter how many strides you give or take away from a tackler.

Hopefully, Shamarko will turn out to be a "beast."

TURNOVERS...TURNOVER, AT LEAST ONE TURNOVER

The Steelers are currently 31st in the league (-11) in turnover differential and they've played just four games to the Giants (32nd) -13 in 5 games. So, yea Ben, it's safe to say this team really is "the worst"...in at least one way. New York was able to beat Atlanta last Monday night because they didn't turn the ball over, but it isn't like the Jets are good at protecting the football. They rank 15th in the AFC -- right above the Steelers.

CAN BELL CHIME IN?

The Jets have been solid through the front 7 and Pittsburgh is garbage running the ball -- even on Le'Veon Bell's appropriately celebrated carries, the team averaged just 3.6 yards per attempt against a much less effective Minnesota defense. Bell needs to get loose a few times on Sunday to make the Jets at least somewhat concerned with the running game. That may open up the Steelers ability to effectively use their play-action passing game, something that has been more of an act of due diligence than a legitimate threat so far this season.

New York will probably come into the game expecting to stuff the Steelers, as they should. But if Bell and the O-line can surprise the Jets, it could go a long way toward putting Pittsburgh on the board in the AFC North win column.

WHOSE JOB IS NEXT?

Ryan Clark and Ziggy Hood will see fewer snaps this week in an effort to bring some life to a defense that was shown up by Matt Cassell in Week Four. And Kion Wilson is just straight up out of a job. If the Steelers lose this one, that could trend continue.

Specifically, players like Cortez Allen, Vince Williams, and Marcus Gilbert need to be on top of their games. Several other players could be on notice as well. The coaching staff doesn't seem to be messing around, and things will get a lot more serious if the team drops to 0-5.

I can't help but think the Steelers will avoid 0-5. It's not going to be easy, and it probably won't be pretty either. But it just doesn't seem possible, does it? Technically, it's very possible. In fact, it's expected, according to the point spread anyway. But this team needs to throw the records out the window. They need to scrape, scratch, and claw for every yard on every play. If they do that, they might have a good shot. And don't forget that Dick Lebeau has owned rookie quarterbacks. Pittsburgh has only lost two games to first-year QBs in his tenure as the Steelers defensive coordinator -- Tryo Smith of Baltimore in a throwaway Week 17 game in 2007 and Brandon Weeden of the Browns last season when the Steelers offense turned the ball over 8 times.